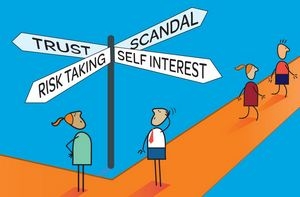 Not surprisingly the report, from Chartered Accountants Australia and New Zealand and Melbourne University's Centre for Ethical Leadership, concludes that countries such as New Zealand remain vulnerable to a repeat of the scandals that led to events like the Global Financial Crisis.

The report, A Question of Ethics – Navigating Ethical Failure in the Banking and Financial Services Industry, argues while regulation has an important role in preventing scandals, it won't succeed without the support of an ethical corporate culture. Remuneration structures are a key part of this.

The report notes financial institutions often reward employees for delivering specific outcomes, often without taking into account the means by which they are achieved.

"Traders in banks, for example, may receive bonuses for taking excessive risks with investors' money with little or no regard for the interests of the bank's shareholders or the long-term stability of the banks themselves. This creates a moral hazard, a situation in which the trader is insulated from the risk of personal financial loss, and therefore behaves differently than if they were exposed," the report says.

'Measure and reward the behaviour you want to see more of'

The report goes on to argue that financial institutions' management should measure and reward the behaviour they want to see more of.

"In financial services, the measure is usually financial gain - no matter how it is achieved. Ethical considerations, including client satisfaction, should be integrated into decision making and measured and considered when remuneration is calculated and incentives awarded," the report says.

It notes that many banks do client surveys and employee ratings by leaders and peers. These, it argues, can assess whether an employees' performance is ethical and in the organisation's best long-term interests, and whether they treat clients and co-workers with respect.

"We recommend the continued and extended use of such assessments across the industry to inform compensation practices. Ethics, risk and client satisfaction should be considered as well as profits in the awarding of bonuses. Practices such as compensation disclosure, consideration of shareholder input, risk management and including clawback and deferral provisions in contracts, should be explored in an effort to curb unethical behaviour and move forward in this divisive area."

The report also suggests establishing a set of specific guiding values and principles that could include; a clear definition of what it means to be ethical as opposed to legal in specific situations and for specific tasks; and an acknowledgement that client trust underpins reputation and is a source of competitive advantage.

"Explicitly state: 'we should never win at our client's expense'," the report suggests.

The report's authors argue challenges lie in ensuring ethical standards are given their appropriate place in decision-making and action.

The full list of specific recommendations made by the report include:

The report is based on a survey of 705 people working in the banking and financial services industry across Australia, New Zealand, the United Kingdom, Singapore, Hong Kong and Malaysia. Respondents were asked about what guides them to engage in ethical behaviour at work, the nature of current industry practices and what would improve ethical behaviour in the future. They had an average of 13 years’ experience in their profession.

"Any attempt to improve ethical behaviour in the banking and financial services industry will only be successful if all of the factors that influence practitioners in the performance of their roles - both conscious and unconscious - are recognised and addressed. We also need to recognise both the positive potential and the risks presented by technological disruption," the report concludes.

I thought so too Gareth, more so since I watched the film last night. I probably should have before, or at least read the book, but I sort of knew the content. However it is a ripper of a film, on only for the Eismans Charactor Baum. From what Eisman has come out and said it appears the film wasn't too far off the mark.

Yes Scarfie they did a really good job with the film. The book's great too. Some really quirky characters, as demonstrated by the Reuters article I linked to, but they sure have their heads screwed on right.

It's pretty entertaining, and the film explains the problems well for the audience.

Synopsis: It is not desirable for the parasite to kill the host. In order that the parasite continues to feed it must only take from the host at a rate which the host can tolerate. Oh, and smile while you do it.....

Unless it is not just a parasite and is, actually, a cancer

"Ethics" "Financial Services" there's some words I never thought I would hear together.

A whole report and they still didn't stumble across the fact only one rule is required.

"You cannot benefit at the expense of your customer"

In case it requires more in depth interpretation
- No percentage value fee. You put in (x hours * y cost / z customers), you did not put in a % of work on the final amount.
- If the profit you make for the customer is less than that fee value (or a loss), you didn't make a profit for the customer so no fee.
- If you make more money than the customer, then your fee is too high.
- No commissions, kick backs, bribes, endorsements, investing in "Friends" companies, or any other activity seemingly tolerated in the current financial services world.
- If you break this rule you are personally liable to repay every cent back to the customer. Sell your house, your car, even a kidney if required.
- If you still can't repay every cent then "GO TO JAIL: Go directly to Jail. Do not pass Go. Do not collect $200."

A good article. A similar criteria should also be rolled out to people in public services e.g. Politicians albeit not in the sense of bonuses but accountability.

Scarfie - in the movie the smarter trader wins..... thats life.