Research commissioned by Trade Me from independent research firm Perceptive has found 47% of home buyers said they uncovered the home they bought through Trade Me, while a combined 9% found their home through a print advertisement in a real estate listings magazine or newspaper.

Trade Me released the research after several real estate agency groups in Hamilton and Hawkes Bay pulled more than 1,300 listings from Trade Me Property after it changed its fee structure from a flat monthly fee per agency office to a per-listing fee of NZ$159 + GST. The agents affected said the change more than quadrupled their costs, which they had previously absorbed as part of their marketing fees to vendors. Some are now offering a Trade Me listing to vendors as an 'extra' cost to other marketing costs still being absorbed, which include listings on Realestate.co.nz and newspaper and real estate magazine advertisements. Others are recommending vendors drop Trade Me altogether and use other tools.

Trade Me said the fee better reflected the value of the listing, arguing around half of buyers found their homes through Trade Me and the cost was relatively low when compared with the overall agency commission and the cost of other types of advertising. See the full article published earlier here.

Perceptive surveyed 300 buyers and 300 sellers across New Zealand by telphone between August and October last year. Perceptive asked buyers how they first found the house the bought. 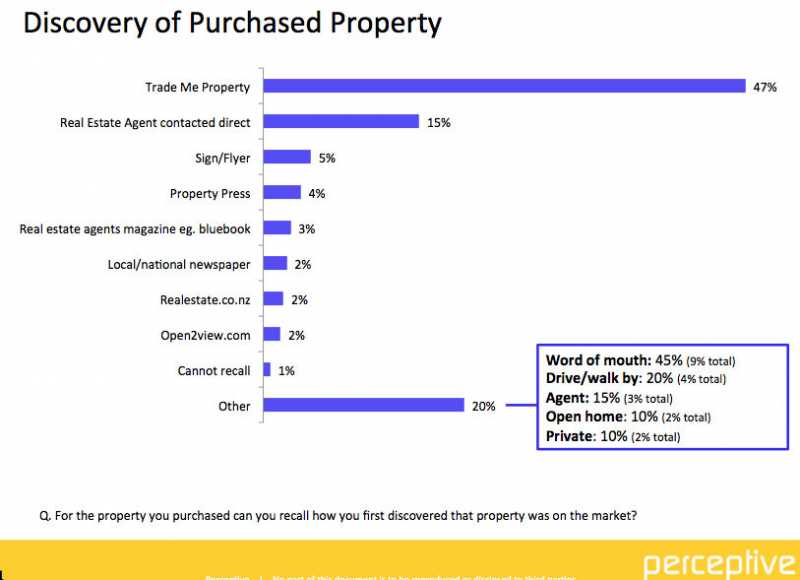 Perceptive then asked what was their primary search tool. 68% said Trade Me, 9% said Property Press, 8% said they contacted an agent direct, 6% said Realestate.co.nz, 4% said a newspaper and 2% said Open2View.com.

The survey found 73% of sellers decided on which marketing channel to use after a recommendation from a real estate agent. It found 62% of agents then told the sellers where the leads had come from, while 38% did not.

Perceptive then asked where sellers thought the leads had come from. 18% said they thought they had come from print advertisements, 40% from online searches, 18% from agent databases, 4% from flyer drops and 20% from other means.

Sellers were then informed of a 2012 survey by Nielsen Research showing that 73% of buyers had researched by Trade Me Property or Realestate.co.nz in the last week, while the second most researched source was real estate agency websites, third was real estate listings magazines such as Property Press and the Harcourts Blue Book, while newspapers were the least used at 31%.

When asked if they only had NZ$500 to market their property, what they would spend it on?: 75% said Trade Me Property.

Asked if a NZ$200 fee for marketing their property would make a difference to their decision on who to choose as their agent, 86% said it would make no difference.

The other part of the equation which Trade Me conveniently neglect to mention is what it costs the advertisers to advertise the property. Print and signage advertisers do incur a significant expense which they are justified in passing on, Trade Me however incur almost no cost at all and are not justified in charging hundreds of dollars.

You can’t lure people in by offering low cost advertising and then ramp up the charges when you have a critical mass without expecting some backlash.

If they insist on charges like that people are right to switch to other low cost online searches like Realestate.co.nz

Unfortunately the price you can charge for something isn't based on how much it costs to provide that service, but on how useful that service is to the client. So if 47% of buyers use trade me then they should be able to charge a lot more for their service than any other, even though it costs significantly less to provide it.

That's true in the absence of any viable competition.

Serious buyers look wherever there are listings - magazines, newspapers, shop windows, any website.  Trademe has nothing special or unique, nothing that can't be reproduced, therefore at some point in the not distant future they won't have a business.

Totally agree. And plus a few other sources that don't even provide listings.

Prints dead. I work in the design industry, and the retrenchment in print continues unabated.

Only a complete fool would spend heavily on print advertising for property.

A targeted banner campaign would cost less and get better results.

Trademe have the marketshare, and brand equity to continue to be the go to destination for property searches. realestate.co.nz really does have an uphill battle.

I suspect the results would be different if you compare the Auckland market, versus the rest of NZ. Most Auckland properties are auctioned and to do an auction requires a vendor contribution. Whilst you can just do online, most would still use print as well.