NZ Post sees losses from postal services by 2016/17, or earlier, without changes to Post deed to cut deliveries to 3 times a week

NZ Post sees losses from postal services by 2016/17, or earlier, without changes to Post deed to cut deliveries to 3 times a week

NZ Post wants your opinion about their proposed changes

Government-owned New Zealand Post, which has borrowed NZ$200 million from investors in bonds callable from 2038, has warned its postal services will be unprofitable by 2016/17 or earlier unless it is allowed to change its Post Deed with the Government to cut mail deliveries to three times a week and to convert more than 70% of its 880 post offices to self-service kiosks.

New Zealand Post has announced proposals for major changes in its Universal Service Obligations in its Post Deed, arguing that it is forecasting a further 44% drop in mail volumes by 2016/17 and must have more flexibility. It warned that sticking with the status quo would force it to ask for a subsidy starting at around NZ$30 million a year and rising NZ$10 million a year after that.

"During the last 10 years mail volumes have dropped considerably, with 265 million fewer items being posted each year compared to 2002. Within five years, mail volumes are forecast to be nearly half what they were in 2002," Communications and IT Minister Amy Adams said in a statement.

“New Zealand Post has advised me that it considers changes are needed to ensure a sustainable postal service in the 21st century," she said, adding any change would require Government approval and she wanted public feedback on the proposals.

“In deciding whether to accept or reject the proposal or seek to negotiate a compromise, I will look to balance the interests of postal users with the need to ensure a financially-viable postal service.”

New Zealand Post’s proposed changes included cutting deliveries to a minimum of three days a week and having more self-service kiosks. It pledged not to reintroduce a rural delivery fee.

"If New Zealand Post does not make the necessary changes, as shown by the following graph, its postal services business will start losing money from 2016/17, and potentially earlier," it said.

"New Zealand Post‘s ability to make the necessary changes is constrained by the 1998 Deed. Mail processing capacity can be scaled back to match the declining demand, but the terms of the 1998 Deed - and in particular the requirement to provide five or six day delivery to 99.88% of delivery points - prevent a redesign of the processing and delivery networks as a whole," NZ Post said.

"For New Zealand Post to develop a sustainable business model in response to irreversible volume decline, fundamental redesign is required." 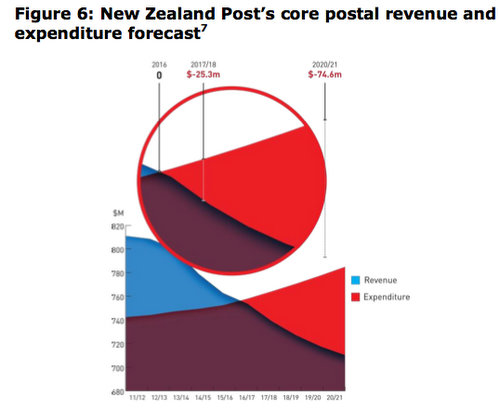 It said it expected to reduce the number of post offices and redesign the ones that are left. It would also move to more franchised and agency outlets.

"These changes are likely to involve less ownership of outlets by the New Zealand Post Group, with a focus instead on agency and franchise models whereby postal outlets are hosted within other businesses. That will mean more local community ownership of New Zealand Post outlets," it said. It also planned more self-service kiosks.

Since its 1989 deed, NZ Post had to maintain 880 outlets with 'over the counter' services.

It is proposing the network have 880 service points in total, including no fewer than 240 where consumers can, in addition to purchasing postal services, use such bill payment services as New Zealand Post may provide from time to time. The network may be made up of a combination of outlets owned by New Zealand Post, services hosted in other businesses and electronic self-service kiosks.

NZ Post acknowledged the changes would have a big impact on rural areas because many rural delivery drivers also delivered newspapers, food and groceries. A move from 5 or 6 day a week delivery to 3 times a week would have a significant impact.

"If New Zealand Post no longer paid Rural Post drivers for five or six day per week delivery, those other goods would not be able to be carried without extra payments to drivers, whether by the provider of those other goods, the receiver, or otherwise (e.g. via a subsidy). Therefore, changes to rural delivery frequencies would have a potential impact that is wider than changes to delivery frequency in urban areas," it said.

NZ Post left open the option of charging fees for rural deliveries at frequency of greater than 3 times a week.

i smell a redundancy package in the inthe near future.

No wonder NZ Post is losing customers.  Parcel post is gone up a lot last year because now calculation volume,  three days ago I posted a registered letter to Europe, used to be around $ 10.- (and a lot lower 2 years ago), now new price $ 14.-.
An increase of ca.40%.
Will avoid NZ Post whenever possible.

In the not to distant future the only letter box's will be in museums.  NZ Post will go the way of kodak...their core fuction is fast becoming obsolete.  They will die out......unless the gummit subsidises.......wait for the inevitable 'save the post' campaign from the left (at present I see they are happy to cross subsidise the traditional rural nat supporter).

Yep, increase the charges to reduce the frequency people using the service till it's totally unprofitable, now that make sense.....not!
You've got to give it to them that with a $200,000,000 dollar loan due in 2038 they now say they need extra cash in the form of subsidies starting at $30,000,000 and I bet they have a straight face when they ask for the money.
As tax payers we're paying twice and this business should be allowed to fail and be replaced by commercial enterprise which would fill the gap.
I hope for the sake of Kiwi Banks - KiwiSaver investors, that the bonds aren't owned by them.

Most post now I find is un-wanted spam, I get just about everything emailed.  I send maybe 2 ~ 4 letters a year, if a courier cost $7, instead of $1 so be it.
Corporate bonds are I suspect the new finance companies for the OAPs, this will be one of many that are at risk, but you know 7~8% on a corporate bond is so inviting!

Ithink that the main problem is that it is to cheap.
If i send a letter from massey in auckland to belmont on the North Shore it costs 70c.
The same letter to Invercargill will cost the same.
The same letter to a rural delivery address costs the same and yet more people and transport is involved.
Iknow that these costs are built into the 70c but surely it may be time to restructure their costings.

I disagree, I think it is now too expensive. It is now nearly $1 to just send a small letter, and will probably be a $1 in  a few years.That is too much, and puts me off sending them When it was 40-50 cents that was fine. That is the base rate too, when the envelope is just slightly larger and standard, then the prices increases to over $1. They have been returning a lot of letters that are slightly oversize, with stickers to say that it needs more postage, and the stamps have been franked, so that you can't use those. They however shouldn't be franking the stamps if they don't deliver the item.

Can anyone here remember the last time that they hand wrote a letter , and posted it to someone  ? .... ( filling an envelope with white powder and posting it to Bernard doesn't count , guys ! ) ......

We'll send you a postcard from the twenty-first century ...... you ought to receive it sometime  in the twenty-second century  ....

I must confess to a Gummy tear of joy everytime the postie brings a company's dividend cheque for me , from some far flung exotic outpost  ... ... Thai bahts , Philippine pesos , or even Wellington woebegones ......

Their main business in the future will be parcels. But posties have trouble delviering them. They either won't deliver them becuase they need a signature, and they can't leave their bike unattended. Or they will be too big to to fit in the post box or for them to carry, so they just leave cards for you to pick them up from a post shop. Often they will require you to pick them up from a postshop that isn't the closest one to you. It is a real mess, and the more people that complain to them about their standard of service the better.

Agree with your parcel comment Rob.  Our rural delivery mailman is considering putting another van on the run just to deliver all the parcels he has to deliver.  The vast majority of it, as a result of internet shopping.

I just wonder how parcels from chinese online stores have almost free shipping. You buy something for a couple of dollars from a chinese online store, and that includes the international shipping to NZ for the parcel. The same parcel going to china from NZ  I am sure would cost 10 times that. There is something strnage with the pricing.

I think NZ Post has actually been pretty good over the years and tried to move with the times and adopt additional services, business hour etc. Certainly far more responsive and better service than AustPost, which is stuck in the 1950's or USPS which tries to lose more money each year than the previous one.
But what do you do once the core business reaches end-of-life? Other than complete reinvention there isn't much choice. Hopefully the govt doesn't get involved and mandate certain outlets etc, this will just stifle any creativity and ability for those regions to reorganise the system to provide maximum delivery services at the best price.

Facts please, USPS is not un-profitable by any sensible measure. Its the victim a typical privatisation racket. You shouldn't need any more proof that Republican supporters are more interested in privatisation of the economy than any actual business efficiency, which privatisation usually doesn't provide.
http://postalnews.com/postalnewsblog/2012/02/10/nalc-congress-turns-200m...

You mean like sell data/info on you to 3rd parties claiming they owned it?
As a collpase in ethical standards make money at any opportunity, yeah sure.
regards