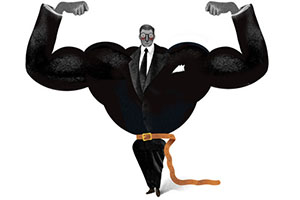 Their conclusion was that the Australian housing market was a 'Ponzi scheme", "insane" and "crazy."

House prices, in their view were likely to fall around 50% and that banks, mortgage insurers and other lenders would suffer massively as a result.

Of particular interest to YieldReport readers will be how credit markets reacted and the news isn’t good.

The ‘Big Short’ story, as it was being called, made international headlines, was on the front page of The Australian Financial Review and the pair were interviewed for a story on this week’s 60 Minutes programme.

Bank shares were smashed, yields on bank bonds rose sharply and the cost of insurance on defaults by the banks (credit default swaps) soared.

Over a day or so, A$20 billion of bank share market value was destroyed and the drop in value of debt securities was also substantial as the story gained traction.

Credit default swaps on the big four banks rose sharply, with the average price now 140 basis points per annum, significantly higher than the 80 basis point premium at the start of 2016. Hedge funds that bought CDS and short sold bank shares would have made large gains without their doomsday scenario even coming to fruition.

Christopher Joye, the ex-RBA senior analyst and now-columnist at The Australian Financial Review, has written several articles suggesting that the hedge fund managers had positioned their funds to benefit from the publicity and market volatility that ensued by short-selling banks and buying credit default insurance. The hedgies played the media and markets like a Stradivarius and have likely already made profits from the publicity of their ‘research’ and the market moves.

This activist strategy is not a ploy that has been used much in Australia although it has been in vogue in the US for some time where hedge funds take large positions and use the media to promote their views to a wider audience.

In the midst of the market volatility, Westpac announced that it was launching a 10 year, 5 year no-call, Tier 2 debt issue for A$525 million. The issue was sold at BBSW + 310 bps which was the widest spread for such an issue since mid-2012. ANZ raised A$600m of sub-debt in November at BBSW+270bps. This story was first published on the Australian service, YieldReport and is reposted here with permission.

One day this sort of thing may actually precipitate a fall.
I'm sure that there is some truth in what they said nevertheless.

There must be some concerns over bad debt provisions in the dairy sector now it looks like lower prices for longer as well as the property markets.

Well, the ANZ share price has yet to rebound - what does one make of that, other than many before these hedge fund managers were leaning the same way over previous months?

Collapses of this magnitude and duration are not without foundation.

So the ponzi scheme is near the top, and the rats are bailing. What is left to carry the can but depositors and mom and pop share holders?

Depositors are covered in Australia.

Pot calls kettle black, as per usual in the financial industry. Joye's thing is to talk it up and he gets his nose very out of joint if someone takes a alternate stance. Oh, and by the way, Santa is just some dude dressed up and the financial markets are just another lottery where occasional winners arise at the expense of the vast majority in a game so heavily manipulated that it would make your head spin if you only knew.