Massey's Christoph Schumacher asks: Is now the time to re-examine our attitude towards sharing?

Business
Massey's Christoph Schumacher asks: Is now the time to re-examine our attitude towards sharing? 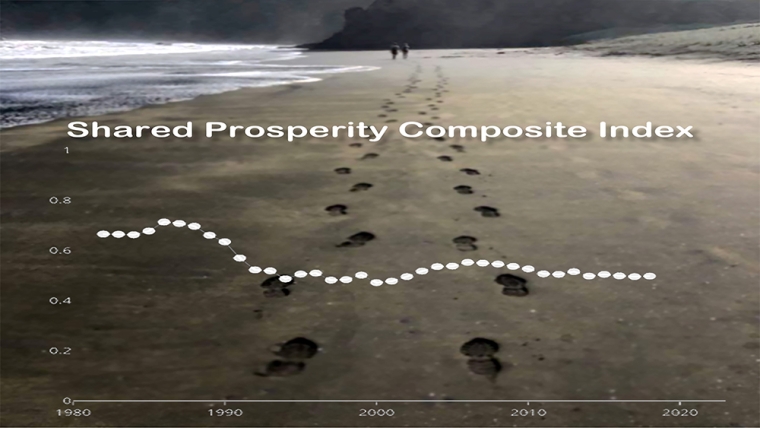 Last week a big box for my son arrived and in it were several books about Marxism. It could be worse, and I am impressed that he is taking an interest in economics, society and politics — not your average topics of interest for a 15-year-old.

Needless to say, it has sparked a series of very interesting discussions at home and these are very timely. The economic lockdown is threatening the livelihood of almost everybody and as the imminent spike in unemployment will make the recovery period so challenging, now is a good time to ponder the role of the workforce in our economy.

Discussions about economic and political systems get heated very quickly. Our upbringing could have something to do with it. I grew up in the later part of the Cold War period in West Germany. Life was good and we had everything we needed and then some. In East Germany things were very different. People struggled and without a heavily guarded wall, many would have left. So, no wonder I thought capitalism was good and socialism bad.

Then there is the confusion about the meaning of terms used in such discussions: Marxism, socialism, communism, social democracy or democratic socialism to name a few. I could spend the next hours trying to explain the difference and similarities of these concepts but I would set myself up for failure and lose many readers in the process. In short, Marxism is a critique of capitalism, wherein the money-equals-power dynamic is challenged, in favour of an economic system organised by the working class. This economic model is known as socialism. When people talk about communism, they often mean a political system in which the means of production are owned by the people, but the organisation of labour and distribution of capital is handled by a single political entity. Social democracy refers to the implementation of social welfare programs within a capitalist framework while democratic socialism supports political democracy within a socially owned economy. Still confused? Me too!

What has this got to do with New Zealand and COVID-19? We are coming out of lockdown and have to decide how far the rescue measures should go.

A year ago, the Knowledge Exchange Hub at Massey University launched the New Zealand Shared Prosperity Index website. The index measures how much we share the wealth generated in New Zealand. It shows that in the early 1980s we shared quite a lot but the market-led wave of deregulation, known as ‘Rogernomics’, that started in 1984 changed things. Despite its socialist roots, the newly elected Labour government introduced radical free-market reforms and so New Zealand shifted (and still remains) further to the right on the social democracy scale. Is this a good thing? Well, it is a question for New Zealanders to answer. Opinions were divided during a series of public lectures. Some people reminisce about the days when New Zealand was a more egalitarian society, others complain that there were too many free hand-outs that were slowing the economy down.

“Those who have more wealth, have more opportunities. It is as simple as that.”

While the consequences of the shut-down will be felt by all of us, for some it will be harder than for others. As believers in the free-market economy, we accept this and argue that people are responsible for their own wellbeing. In doing so, of course, we conveniently ignore the fact that equality of opportunity is an illusion. It doesn’t exist. Those who have more wealth, have more opportunities. It is as simple as that. We then point to the government, because we are a social democracy after all, and there is a welfare component to our economic activity.

The question now becomes: How much help should the government provide and in what form? There are the direct relief payments, tax breaks or cuts, and liquidity injections into sectors that have been hit the hardest like tourism. Suspicions are, however, that it’s not enough. Indirect help could come from credit payments for businesses and companies of all sizes, or payment postponements like tax, rent or interest. The problem with such measures is that they have to be paid back so they simply defer the inevitable. At the macro level, further interest rate cuts by the Reserve Bank could stimulate the economy but given that the current OCR is 0.25 percent, there is not much room. Negative interest rates could do the economy more harm than good.

“Relief measures kick-start the economy but it is important to allow for demand to decline by a similar amount as the output under lockdown.”

The overall idea of many of the relief measures is to stimulate aggregate demand. This is good to kick-start the economy but it is important to allow for demand to decline by a similar amount as the output under lockdown. Stimulating demand above output levels could lead to rationing and increased inflation which creates more problems later on.

To support the workforce and prevent unemployment, Germany uses “Kurzarbeit” a short-time work allowance which compensates workers for underemployment during a crisis. Rather than laying-off staff, firms can reduce work hours and pay employees accordingly. The government then provides additional payments to workers to compensate for the shortfall in income. This has proven to be a cost-effective initiative during the GFC as it prevents the loss that would follow from increased real unemployment and allows firms to spring back to full capacity quickly.

We have experienced time and time again that disasters and crises bring people closer together. The corona crisis might be a chance for New Zealand to re-examine its attitude towards sharing and perhaps return a notch to the left on the social-democracy scale. We need to look after people that, through no fault of their own, have lost their source of income. We also need to ensure that people who risk their own health in order to be there for others (people in the health and essential service sector come to mind) receive a just reward. And while my 15-year-old, who’s just finished reading Marx’s Das Kapital, still disputes most things I say about economics, this is something we can both agree on.

Hadn't heard of "kurzarbeit" but sounds like it makes a lot of sense, and reminds me too of arguments in favour of making short working weeks a new norm, ie:

I wonder what Keynes would say if he saw us still working 40+ hour weeks. All this technology and efficiency for what?

Socialism is attractive to the young for (at least) a couple of reasons.

At whatever age your eyes are opened to the realities of existence, I think it would be weird if you were not shocked at the state of mankind. There are people starving, being sold into slavery and killing one another. Lying, cheating, stealing and violence are common place. So smart kids in school invariably ask, "Why is this so?" When you see injustice you feel aggrieved and ask for an explanation.

Socialism offers one explanation and does it in a way that you yourself are not blamed. It's someone else's fault, which is attractive. Much of socialism sounds like a great idea, who wouldn't want to share more. How could anyone be against sharing more?

Many famous people were socialist when they were young. Milton Friedman and Ronald Reagan are just two. Reagan was so left in his politics he was followed by the FBI at one time.

It's only when you see socialism put into practice that you discover there are real problems.

I think nobody should be afraid of thoughts, of other peoples ideas and arguments. Especially young people. It's important to understand how and what other people think. But for that reason I think your son should read both Marxist economic theory, but also Aleksandr Solzhenitsyn's, 'The Gulag Archipelago'.

Just as there are reasons young people are attracted to socialism there is also reasons many older people who started out socialist end their lives as conservative thinkers.

This is also a nice quote (paraphrased somewhat) from Thomas Sowell, another radical who started very liberal and ended very conservative.

"Liberal's have a sort of Rousseau world view where people are, ‘born free but are everywhere in chains’. People's hearts are fundamentally good and the only thing stopping happiness are the chains of the wrong policies and institutions."

"A conservative's world view is that the human heart is fundamentally bad and everything is trade offs. That mankind is flawed from day one and therefore there are no magic solutions only trade offs, checks and balances."

That's a good one too.