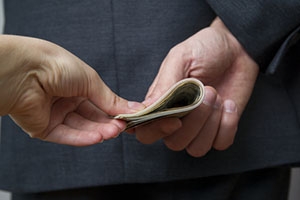 Only half of New Zealand businesses would report an illegal demand from customers or suppliers, according to a Chartered Accountants Australia and New Zealand (CA ANZ) survey looking at corruption faced by Kiwi businesses.

The survey, involving 1000 New Zealand businesses of different sizes across industries countrywide, shows that only 51% of businesses would definitely report an illegal demand with larger firms more likely to do so than smaller ones.

Overall, 6% reported having had illegal demands or bribes made by customers or suppliers.

Patterson said “The survey highlights our concerns that New Zealand’s small-to-medium businesses are unaware of the dangers of bribery and corruption.

“We need urgent education and action to ensure our businesses understand the risks and are implementing measures to help stamp out any corruption they encounter.

“Organisations such as ourselves recognise the importance of codes of ethics, and compulsory training on ethics, but still more could be done.”

“Real or perceived corruption,” Patterson said “is a real issue for private sector businesses as a strong reputation means lower costs of doing business, lower costs of capital and easier access to markets.

“Relying on our good reputation is no longer enough.”

A further 16% of businesses reported having suffered from fraud, with manufacturing reporting highest levels at 23.5% compared to construction and professional services the least at 8.7% and 9.9% respectively.

The survey follows CA ANZ’s September 2015 report “Are Australia and New Zealand Corrupt?” which shows that bribery and corruption rates have risen significantly nationally and regionally.

However, only 16% of businesses surveyed had a formal anti-bribery/corruption policy in place – Wellington businesses were most likely to at 21.8% and Auckland least likely at 11.6%.

And, only 20% knew about the Protected Disclosures Act which provides protection for whistle-blowers who are one of the most common sources of bribery/corruption disclosures.

Only 18% of respondents think whistle-blowers should be rewarded, as happens in some countries which offer rewards for whistle-blowing on tax issues.

Patterson said more regulation wasn’t a solution, “but we do need more education around this issue, penalty regimes in place and a proactive response from Government and business.

“We have our global reputation to protect. Losing this poses a significant risk as we do more business in markets with different ethical frameworks to our own.”

NZ is not the corrupt free place it is made out to be. It is a little hell backwater of unethical and corrupt behaviours.

Time plus costs in reporting in NZ = walk away from the problem if you can.

"It is a little hell backwater of unethical and corrupt behaviours."
Er..... according to the data "from second to fourth place"

Pureant _ I don't give a toss what the data says or where the ratings are. It is under-reported for the reasons I stated above.

Once you used to get one or two issues a year.....now it seems like one continual stream of nonsense coming from every corner.....

People blatantly telling lies and changing their stories are up to no good.

Seen it. Reported it. Suffered because of it. Which just made this cynical person a bit more jaded and a bit more cynical.

In its haste and fervour to be seen to be building more houses, as promised, the Government has lost its moral compass, so blinded by it that it is using its powers to get into the fray "at the behest of" Fletcher Building

I think we are living in a high state of denial when it comes to corruption. We very much prefer to believe that we could not possibly have corruption in the country. Any body who has the temerity to cite examples of it is studiously ignored and treated as some sort of traitor. That is bad enough, but I believe that we have some people, politicians included, who are well aware of this and use it to their advantage.
Do we even have effective laws where an individual can take legal action in these cases, or is it left up to a bunch of faceless, malleable government servants? When you get down to it, is there an unequivocal law against bribery and corruption or just a handful grey, broadly applicable rules that anybody with a good lawyer can easily circumvent. May be the reason why we have little apparent bribery and corruption problems is because it is not really against any law that can be readily enforced?

Totally agree.I remember that Taito Field's corruption appeared to be tolerated at the highest level, till he did some waka jumping, and an election was coming up so his vote was not necessary any more and he was toast only then.IIRC there were 9 Cabinet ministers in the 9 years that could have been arraigned, only Fields and Dyson were accountable in a legal sense in the end for their illegal antics.
It seems to be a great help if you are rich, knighted or an MP(he/she did nothing wrong!!), tolerating corruption at all at the highest level will see us like Zimbabwe in the end, especially as the corruption "trickles down"...but not the money...

Thanks for reminding me, I had forgotten about him. Therefore there are some laws in place. So who can raise a complaint, only the government?
There certainly have been plenty of other incidents that slide past without more than a bit of controversy in the paper.

Our parliament is so grey its not good so many backdoor deals being done its not funny
Judith Collins was a classic, found to have done nothing wrong by the auditor general, what she did was not illegal BUT was not a good look for a senior minister, and lets not forget the many MPs run out of parliament from all parties for crossing the line and we have had many of them in the last 10 odd years, mike sabin, Claudette Hauiti Darren Hughes, Aaron Gilmore ,Pansy Wong, David Garrett Andrew Williams ,John Banks, Donna Awatere Huata Richard worth
then you still have plenty still there that have crossed the line and got away with it, helen and her painting comes to mind, or JK the pony tail puller these may be miniscule things but goes to show character at the very top, right down to some that should be doing time behind bars
http://www.nzherald.co.nz/nz/news/article.cfm?c_id=1&objectid=10591650