Yu-Ming Wang of Nikko Asset Management says the real trade war is for IP, innovation, and talent, and is being fought on the turf that is Asia’s burgeoning class of middle income consumers

Business
Yu-Ming Wang of Nikko Asset Management says the real trade war is for IP, innovation, and talent, and is being fought on the turf that is Asia’s burgeoning class of middle income consumers
7th Mar 17, 10:26am by Guest 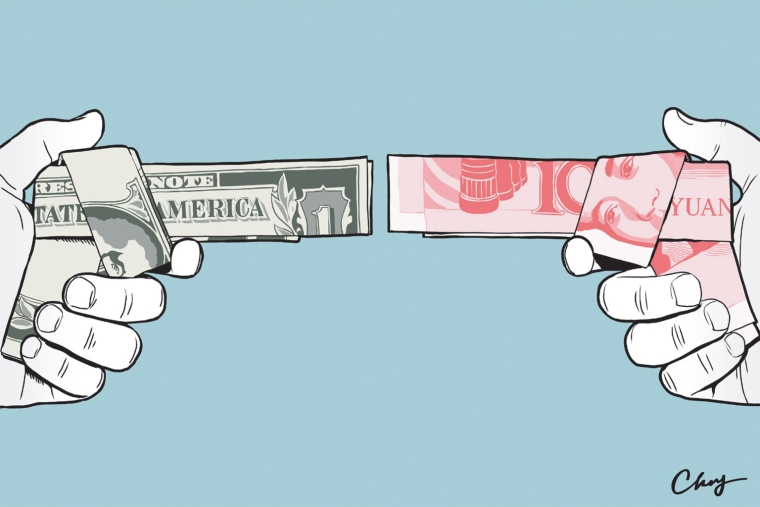 There has been much concern lately about the new US administration’s trade policy. Under Trump’s ‘America First’ ideology, the US has pulled out of the Trans-Pacific Partnership (TPP) and is looking to re-negotiate the North American Free Trade Agreement (NAFTA). What other changes could a more inward-looking America make to its trade policy, and why are global trade deals suddenly falling out of favour?

Taking a step back and looking at global trade numbers, we can draw a number of conclusions that might explain America’s new thinking on trade. First, the US accounts for a shrinking portion of global merchandise trade, while China has surpassed it as the world’s #1 exporter. 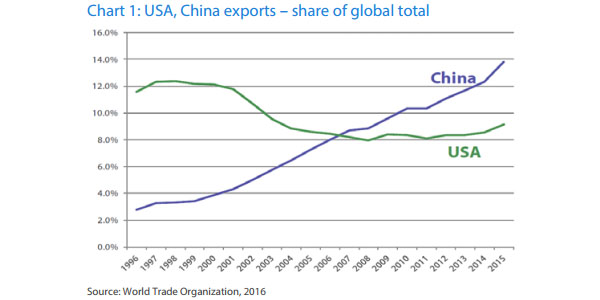 While the US remains the largest market for global merchandise exports, the gap with China is shrinking. 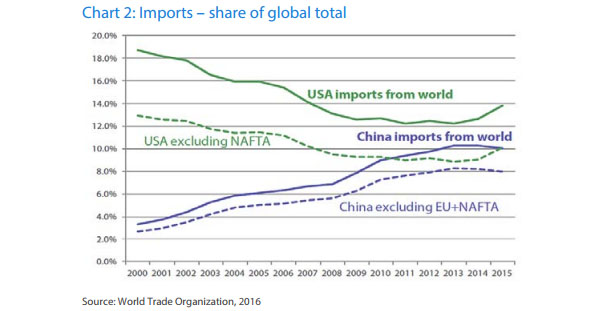 In fact, China already holds the #1 importer spot if trade within NAFTA is excluded. Another interesting observation from Chart 2 is that China imports significantly more from Emerging Markets than EU or North America. China has also caught up to rival the US as the largest importer of services. 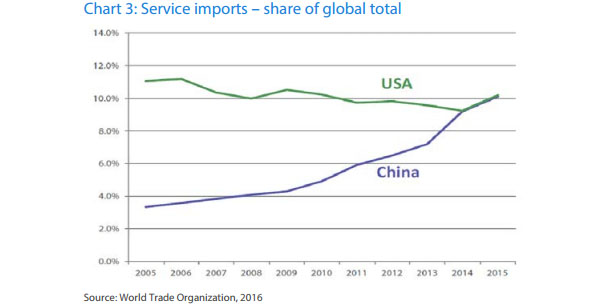 Within Asia, the waning trade profile of the US is even starker. China receives 44% of all Asian merchandise exports and is by far the largest export destination. The US is a distant third, with a 20% share of Asian exports. 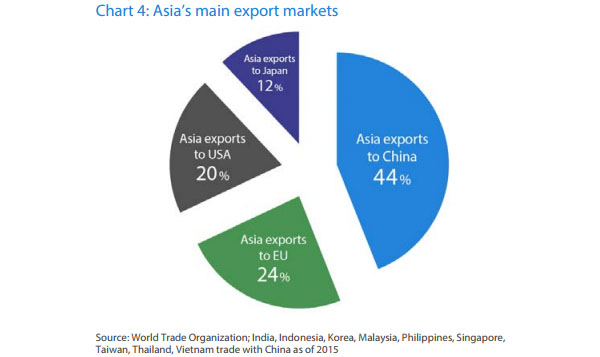 When we see the numbers in this light, the protectionism of the Trump administration is perhaps less surprising. Faced with the threat of an increasingly dominant China, the new US trade stance could be a last-ditch attempt to seize back influence within the global arena.

Looking beyond the trade numbers

Trade numbers don’t tell the full story, however. Let’s examine the supply chain of the iPhone, surely among the most profitable products ever made. The iPhone 7 retails at USD 658. Of this, USD 257 or roughly 40% goes to Apple, other US companies take home USD 70, Taiwan, Korea and Japan pocket between 5% and 10%, and China, as the assembler and shipper, nets less than 3% of the retail price1. 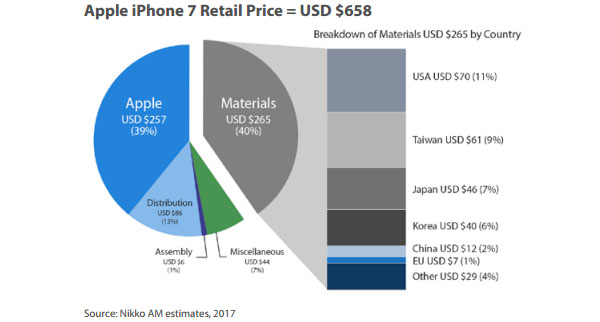 This quick analysis reveals where the real value in today’s global economy lies. It is not within the components, the assembly, or the transport of a product. In fact, the real gold lies in the Intellectual Property (IP) portion of the supply chain, which in the case of the iPhone, mostly sits in Silicon Valley. It is, thus, not surprising that San Francisco and the Bay Area are the most expensive real estate markets in the US today.

The real competition is for Intellectual Property

Currently, the US still dominates the global economy value chain. It continues to be a leading IP originator in various fields from smartphones, to shale oil, to artificial intelligence. That said, we shouldn’t discount China’s capabilities on this front. It has recently surpassed the US in terms of patent filing2. Its research and development (R&D) spending3 already exceeds that of Europe, and is closing in on the US.

In its ‘Made in China 2025’ initiative, Beijing has set out clear plans to upgrade its industries and move up the global value chain. Key sectors it is targeting include semiconductors, robotics and biopharmaceuticals.

It’s all about the people

Many US brands first found success in the large domestic market before going on to become multinational giants. In the same vein, the sheer size of China’s population could underpin its success in the competition for intellectual capital. The rapid rise of the Chinese middle class has created a huge domestic market for cars, smartphones and internet. If Chinese firms capitalise on this, the emergence of new Chinese global brands would be inevitable in the near future.

I remain bullish on the prospects of China and the wider Asian region. Looking past the noise surrounding US protectionism, we see that Asia is less dependent on US trade than we would expect. And looking past the noise surrounding global trade numbers, we see that the real trade war is for IP, innovation, and talent, to be fought on the turf that is Asia’s burgeoning class of middle income consumers.

In this arena, I believe that Asia’s population advantage and its sizeable domestic market position it favourably within the shifting global landscape.

This text was presented in a speech at the Nikko AM sponsored ‘Global Interdependence Center Conference’ in Singapore on February 20, 2017. This is part three of a series on the “Pacific Decade” which previously includes:
Part 1: Capitalising on the Pacific Decade: Taking the longterm view on China https://en.nikkoam.com/articles/2015/08/capitalising-on-thepacific-decade-taking-the-long-term-view-on-china
Part 2: A deeper look into Japan and China's debt problems https://en.nikkoam.com/articles/2016/09/a-deeper-look-intojapan-and-china-s-debt-problems

1. Source: Nikko AM; estimates based on proprietary research; proportion of non-material cost components based on assumption that proportions would be similar to those of the iPhone 4

Yu-Ming Wang is the Global Head of Investment and Chief Investment Officer, International, at Nikko Asset Management. This article first appeared here, and is reposted with permission.

This assertion may be correct , and is well supported with emperical evidence .