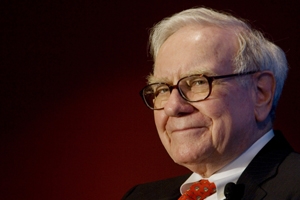 Berkshire Hathaway has bought a 3.7% stake in Insurance Group Australia (IAG) for A$500 million.

The firm has bought 89.8 million new IAG shares at Monday’s closing price of A$5.57 per share, and is set to take a 20% quota of IAG’s consolidated insurance business over 10 years.

In , IAG owns the State, NZI, Lumley and AMI insurance businesses. IAG underwrites over A$11 billion of premiums per year in , , and parts of .

Berkshire Hathaway has investments across a range of industries including general insurance and reinsurance. It is one of the top 10 publicly-listed companies globally, with a market capitalisation of around US$350 billion. It launched its specialty insurance business in earlier this year.

Speaking in a recorded video played during a teleconference today, Berkshire chairman and chief executive Warren Buffett said, "I'm 84-years-old and this is my first investment in an Australian company. I've been very derelict, but it’s been worth waiting for.

“We've entered into an area of the world where we've done some business before, but now we're coming in with an ownership position."

and IAG have had a reinsurance relationship since 2000. Now the two companies will work together exclusively.

IAG group managing director and chief executive, Mike Wilkins, says the deal will reduce IAG's capital requirements by about A$700 million by 2020; with A$400 million of this captured in 2016.

“It also further enhances IAG’s personal and SME insurance proposition and, importantly, it provides a springboard for future business innovation and development for both companies”, he says.

“We look forward to the benefits that will flow from the combination of IAG’s underwriting skills, supply chain management expertise and deep customer knowledge, coupled with Berkshire Hathaway’s specialty insurance expertise.”

The rights to be transferred by IAG represent less than 1% of its annual Gross Written Premiums.

IAG says the deal will also reduce its need for more reinsurance – it’s currently one of the world’s largest purchasers of catastrophe reinsurance cover.

It says, “The quota share arrangement will reduce IAG’s exposure to the geographic concentration of insurance risk in and , lowering IAG’s future catastrophe reinsurance needs and its exposure to potential volatility in reinsurance rates”.

Buffett, says, “We have worked with IAG for more than 15 years... they are a natural partner with a strong management team and brand presence.

He hopes the partnership will help fast-track ’s entry into Australasia.

IAG says it’s looking to deepen its reach into , as there’s room for greater penetration into a market made up of a growing middle class. The insurer already has operations in and has interests in general insurance joint ventures in , and .

Buffett and Wilkins expect their relationship to continue well beyond the 10-year deal in place.

IAG can place up to a further 5% of IAG’s expanded issued capital to within 24 months. However can’t increase its shareholding in IAG above 14.9% for the period of the partnership agreement.

Here's an IAG presentation on the deal.

This is an Aussie Insurance company, right ?
Buffett, the ultimate insider, striking sweet deals for preference...always.

Berkshire Hathaway took over General Re a decade ago. Top reinsurers are at http://www.carriermanagement.com/news/2014/09/11/128944.htm - BRK sits around fifth.

Warren knows where the easy money is - Yes, the NZ suckers with the most deregulated insurance industry in the world (see article from Andrew Hooker).

Just what we need; another parasite clipping the ticket on the Kiwi household.

U know you're getting ripped off in premiums when u see buffet taking a share in them, the world's greatest value investor. He once said he likes shooting fish in a barrel but prefers the fish to be dead already. Queue the n.z consumer

It's a sure sign IAG are now getting monopoly pricing power (i.e ripping us off)

You are so right - Buffet wants something for nothing and I guess the citizens will cough up or .... you can bet these recent encounters with our Chinese free trade partners have more than a little to do with it - we may well be offered no choice but to stiffen our resolve to turn away from key areas that reward our welfare.

Possibly, but not much economic exchange of interest.

The rights to be transferred by IAG represent less than 1% of its annual Gross Written Premiums.

Yes - timing is everything The weekend's flooding was being ranked second only to the 2011 Canterbury earthquake for long term problems, Civil Defence said. Read more

Was this the sale of the century for the vendor, in terms of risk reduction? Read more

That shows he likes the risk-reward the clever Actuaries at IAG have come up with. Premiums high relative to likelihood of a lose and amount predicted to be paid out in claim.

Hopefully it puts the spot light on NZ/AU and gets some more players in the space to compete premiums lower.

he is also looking for a bank,
http://www.smh.com.au/business/warren-buffett-eyes-more-australian-deal…