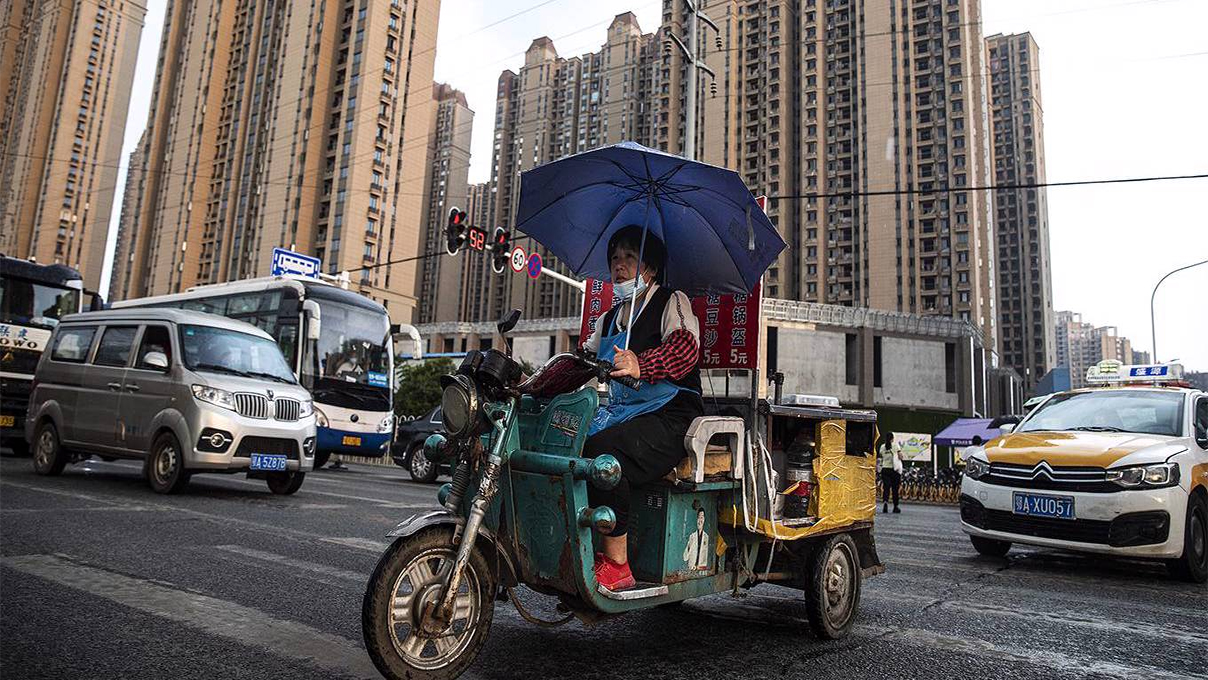 When Deng Xiaoping launched China’s strategy of “reform and opening up” in 1978, economists in the West had their doubts. In their view, a vibrant market economy was fundamentally incompatible with China’s authoritarian political system. But many in the East – including Koreans like me, who witnessed the East Asian miracle while living under developmental dictatorship – were hopeful. Now that China is the world’s second-largest economy, it seems clear that our optimism was warranted.

But, as China’s economic slowdown suggests, the next phase of its development is rife with challenges. The country risks being ensnared by two traps: the “middle-income trap” (the tendency of fast-growing developing economies to lose momentum once they reach middle-income status) and the Thucydides Trap (when tensions between an insecure incumbent hegemon and a rising power lead to conflict). As I argue in my new book on China, global value chains (GVCs) are a key variable linking these two traps.

The middle-income trap is undoubtedly formidable, having ensnared Thailand, Turkey, and Brazil, to name a few examples. It comes about partly because of the difficulty of building sufficient innovation capabilities to enable the economy to shift from low-wage activities to the production of higher value-added goods.

But China has positioned itself to avoid this pitfall. Already, the country’s ratio of research-and-development spending to GDP is close to 2.5% – far above the average for upper-middle-income countries. As a result, China filed 28,680 US patents in 2021, ranked third after Japan (48,405), followed by South Korea (22,120) and Germany (15,334). And the government has made the continued development of China’s innovative capabilities a top priority.

Beyond innovation, economic research has identified two other variables that determine whether a country can evade the middle-income trap: the presence of large world-class businesses and the absence of excessive inequality. On the former variable, China is also doing very well. The number of Chinese companies in the Fortune Global 500 soared from ten in 2000 to 135 in 2021, surpassing America’s 122.

While these figures put China roughly on par with the United States, they do not bode well for avoiding the middle-income trap. That said, China’s government recognizes the country’s inequality problem and has committed to addressing it through the so-called common prosperity campaign.

As for the Thucydides Trap, although the US and China are not currently fighting a conventional war, they are locked in a tense competition, not least over GVCs. The US does not want to rely on value chains led by its rising challenger, so it has imposed tariffs and restrictions on Chinese exports and banned many Chinese companies from accessing critical technologies, such as semiconductors.

While the US most likely cannot achieve comprehensive economic decoupling from China, it might be able to do so in high-tech sectors, including semiconductors, batteries, and artificial intelligence. This prospect has sent China’s efforts to bolster its innovation capabilities into overdrive.

The push for decoupling has also disrupted China’s Belt and Road Initiative, which was supposed to scale up GVCs, and driven China to attempt to source more intermediate goods locally. Many sectors – including automobiles, batteries, wind turbines, drones, and cell phones – have embraced the “all made in China” ethos.

In any case, a partial decoupling from the US would not stop China’s rise. Last year, China’s GDP was 73.4% of the US level, with the share having risen by two percentage points annually for the preceding five years (Chart 1). At that rate, China will catch up with the US by 2035. In terms of per capita income level, China has been gaining on the US by about one percentage point per year, reaching 27.7% of the US level last year (Chart 2). This suggests that China could reach 40% of US per capita GDP – high-income status – by 2033. 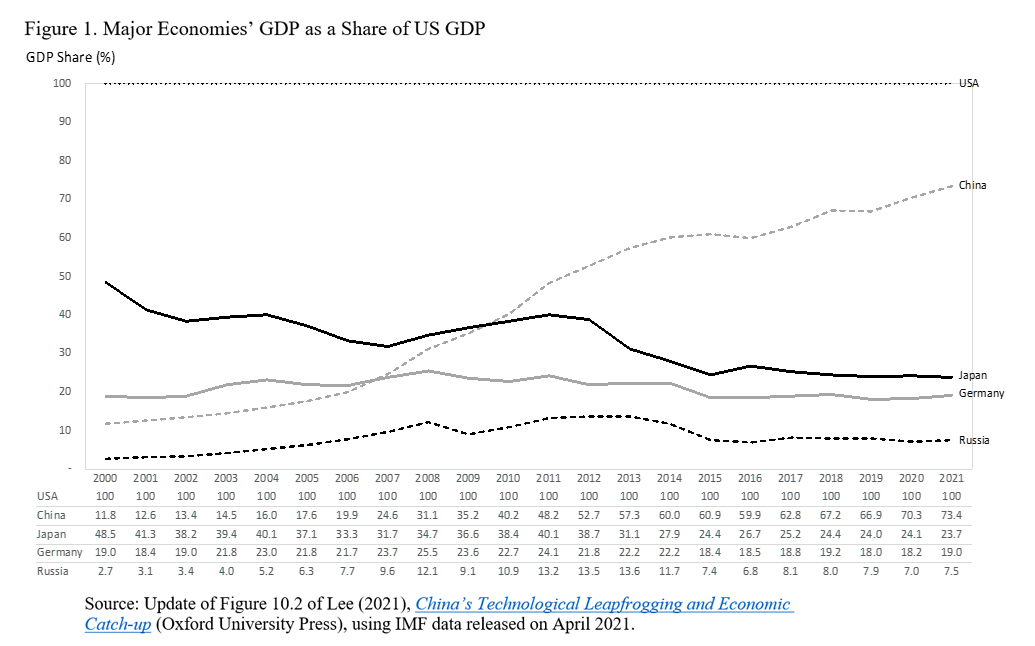 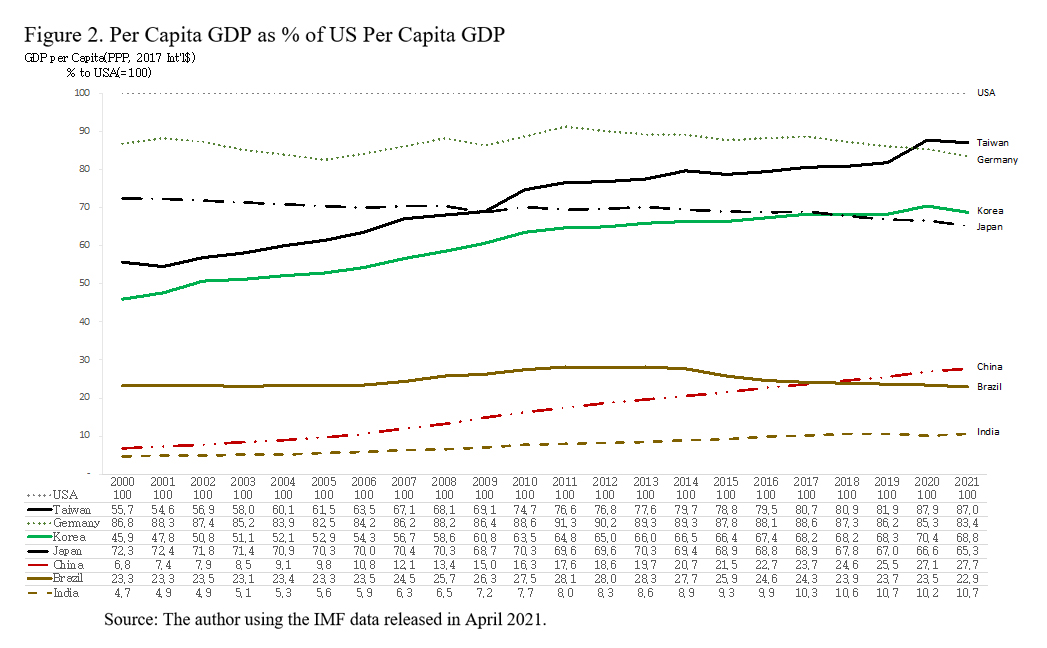 But whether China achieves this depends upon several factors, including its ability to continue upgrading its GVCs and manage mounting internal risks. To counter the effects of external shocks – especially the pandemic – China’s government eased credit conditions, lowered interest rates, and loosened local governments’ control over fiscal expenditure. This has boosted corporate and local-government debt, fueled shadow banking, and re-inflated the housing bubble.

Some of these developments, especially rising corporate debt and non-performing loans, hark back to conditions in South Korea before the outbreak of the Asian financial crisis in the late 1990s. China is working hard to manage these risks, not least by postponing financial liberalization.

But China’s weak rule of law also carries serious risks, including official corruption, which tends to increase inequality and thus could undermine China’s efforts to avoid the middle-income trap. In South Korea, democratization played a central role in strengthening the rule of law and checking corruption, thereby enabling the country to reach high-income status.

Despite the “Beijing consensus,” China has not yet developed a system that can support a similar transition. While China does not have to adopt Western-style liberal democracy, it will need to devise a viable alternative, which might constitute a third trap facing China.

Keun Lee, Vice Chair of the National Economic Advisory Council for the President of South Korea, is Distinguished Professor of Economics at Seoul National University and the author of China’s Technological Leapfrogging and Economic Catch-up: A Schumpeterian Perspective (Oxford University Press, 2022). Copyright: Project Syndicate, 2022, and published here with permission.

Another example of a refreshingly different (non-Anglo) perspective, thank you Interest.co.nz