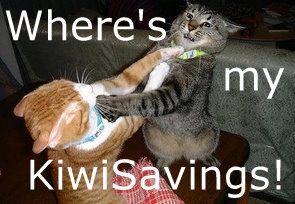 Bullying bosses and ill-tempered staff may be unrepresentative of the labour force on the whole, but they don't stand much of a chance in a court of law when it comes to breaking KiwiSaver responsibilities.

While only three such cases are on the public record, the judgments in all have been weighed in the favour of the employees -- and their KiwiSaver accounts.

One of the most dramatic dust-ups involved a female employer and female employee who came to blows over an employment contract negotiated in what may best be described as bad faith.

Court documents describing the "fracas" say the 2008 incident turned ugly when the employee (Christine Conrad) unwittingly and without guidance signed an employment contract confirming the job on the basis there would be no built-in KiwiSaver obligations for the employer Taumata Poihipi Te Kohanga Reo in Taumaranui in the central North Island.

The complainant was told at the time of her hiring by Lynda Henry that the marae simply could not afford to hire her if they had to pay KiwiSaver contributions above the agreed salary. She was told to like it or lump it.

"She was told if she wished to be in the scheme: 'we don't want you'," the court reported.

According to the judgment from the Employment Relation Authority, Conrad signed the contract under duress but subsequently consulted with the community law centre and learned that employers were legally required to pay KiwiSaver above salary, unless there were "good faith" negotiations whereby an alternative arrangement was made. (See our KiwiSaver Q&A section on employer obligations under the Act).

When Conrad (who had been hired as a part-time employee) later confronted Henry with that information, with her contract in hand, the situation quickly became heated.

"The fracas including shouting, or yelling abuse, pushing, throwing objects, including the employment agreement document and some shoes and the placing of Ms Henry's hands on the  neck of Mrs Conrad.''

In court, Henry admitted to the aggression and confessed to having uttered a threat "to kill" Conrad, but said it was in self-defence.

Following the skirmish, Conrad was dismissed with pay and told in a letter that "quite frankly we don't need your kind of nature and intimidations here thank you very much.''

The employer declined a subsequent request by Conrad to discuss the situation and also the opportunity for mediation, so the dispute ended up at a tribunal hearing.

The ruling in Conrad's favour concluded that the dismissal was unlawful as was her employer's refusal for a request to discuss the conflict before it ended up in court. She was awarded just over NZ$2,200 for time lost in labour force and as compensation for the hardship suffered.

A second case involving KiwiSaver that ended up in court was only slightly less inflammatory. (For full details see "Bully boss costs firm $30,000."

The incident involved a property manager who was pushed out of the office because of a personality conflict with her employers who amid a myriad of other labour violation, withheld KiwiSaver payments on her account for a time. ( Pryce v Wanganui Realties Ltd (ERA, 30/04/10)

A third (Wilkie v Hughes ERA, 08/04/09) involved a struggling dairying business, where a judgement was made against the defendants for failing to pay family members for work done on the farm as well as not making KiwiSaver payments.

Even though the farmers were having to borrow on future milk pay-outs, the Employment Relations Authority found them to have violated the law.

Have to say it.....employing anyone in NZ is opening yourself up to abuse and serious risk...is it worth it?

I have deleted your comments. You may well have been taking the mickey but the use of foul language and comparisons to various European dictators lowers the tone of the site.

Your moral standards are a beacon to us all.

Hey Bernard I'm sure Amanda will be really grateful and maybe you will even get a smile! Ha ha.

(PS - I have seen plenty of other comments with swearing in them and they don't get deleted - how come? Amanda is pretty. :) )

Most of the time, the central issue is the employer and employee disagreeing over remuneration.   KiwiSaver is often involved in there, so gets a mention.