Whether you're going for growth in KiwiSaver or playing it safe with cash and bonds, it pays to know just who is handling your retirement savings and what their approach is to managing that money.

Fund management styles roughly delineate into two camps; active or passive, although the former is known by several terms including dynamic, value investing, momentum and alternative. (To read more on investing styles see our investment 101 series by Kevin Mitchelson here.)

Chris Douglas, co-head of research house Morningstar New Zealand, said the debate about which is better is never ending.

"It's a topical debate globally continually, and it's one where we're seeing a bit of divergence in KiwiSaver as well.''

To a large extent their success is owing to "inefficiencies" in the New Zealand market, Douglas argued, using Telecom as an example.

"It's been pretty easy for NZ fund managers to be short Telecom versus the index, and that's led to relative out performance versus the NZX50.''

For KiwiSavers invested in funds with a larger than average exposure to New Zealand equities that's been good news, adds Douglas.

Relative to other share markets world-wide, the NZX50 has stood up.

So does this resiliency bode better for passive or actively managed funds in the case of KiwiSaver?

'It's all about asset allocation'

"The reality is that asset allocation is the key decision to make and that's not a passive decision.''

This belief is borne out in the divergence of performance between both passive and actively managed KiwiSaver funds over the past four years.

For example, while the average growth fund has over the past four years fallen -1.72% (after fees) some but not many have returned above 6%.

While those KiwiSavers invested in higher risk growth and aggressive funds might bemoan their losses, Douglas suggests their relative losses aren't all that acute, given that global share markets fell by as much as 40% through the global financial crisis.

"It's a loss but it's not a bad result given the tremendous volatility in 2008. It highlights that it's been tough times but KiwiSaver funds have served them reasonably well.''

So what accounts for those above average returns in KiwiSaver and can active fund managers take credit for them?

Douglas said there were a number of factors driving the strong performance including relative strength of the New Zealand market and also currency hedging. 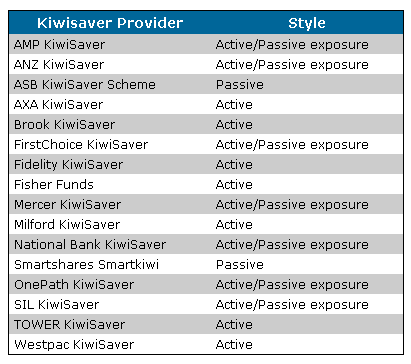 Get the hell out of paper while it still has value!

But what if we have deflation rather than inflation?

That would make savings more valuable in real terms.

I think this assumption about hyperinflation is overdone. Yes it might happen if you have systemic collapse. I think we're more in a turning Japanese situation. They had a long, long period of deflation and recession.

Savers in bonds and term deposit accounts actually did better than anything else in Japan and the purchasing power of that money rose more too because of deflation.

You are right Bernard as it goes, noone can predict the future.  Some things are clear to me though, Paper assets rely on the "bigger fool theory" wheras it is impossible to change the intrinsic value of real items.  Succesful investing has one key rule "don't lose money".  Paper is free I get pleanty in my mailbox every day, and is only used as landfill.  The maths behind the debt spiral the world is facing is also certain in its outcome.  10 years from now or even longer but certainly before GenX hits retirement the truth will become clear.  Here is a nice picture of Global debt.  http://www.economist.com/content/global_debt_clock

Fiat money is superior to the gold standard as it allows for  sustainable growth and wealth accumulation at a rate impossible to achieve with a gold standard - provided state spending relative to income is managed responsibly and ethically.

Therefore it is perhaps due to the nature of mankind (the corruption of the open public purse) that such a fiat system has a finite lifespan and needs renewal from time to time.

The gold standard is a poor substitute for what can be achieved with properly managed fiat money.

Any monetary system that uses either

Has a FINITE lifespan, and market crashes with wealth transfers upward.  FRB causes inflation which transfers to the creator of the money, interest gives wealth to those holders of money while taking it from those who need money.  The whole system is unsustainable becuase money in itself is not real, it is just a medium of exchange, a way to define the value of labour and resources.

Savings and cash, yes at least while going into the depression and maybe while at the bottom of it for a while.

For wage earners though in absolute terms while I think we are facing severe deflation,  the effects PAYErs feel could be inflationary.....ie their wages deflate faster than the goods they want to purchase.......a nasty twist....on an already nasty situation.  Wages should prove "sticky", if you can hold on to your job, you are better off. Once your job goes, well being un-employed makes many things un-affordable and then you find the next job pays substantially less......

"systemic collapse" during the Great Depression we saw a huge drop and no inflation and certainly not hyper-inflation both are credit events.  Once at the bottom all bets are off....I wonder if Govns wont then print like crazy.....which could then see inflation....it wont do them any good but it gets them to the next election.....the hyper-inflationists might yet get the last laugh.

Hence Im a cash person today (and for 5 or 6 years out) but think moving to housing which will be cheap or gold seems to make sense to protect yourself from the Govn's sticky fingers but time will tell.

Money is volatile, and subject to government, and banking cartel interference.  So trying to outsmart them is a good plan but is risky.

Oh  I agree......hence I think an ordainary person's (such as myself) only option is to not play their game.....Since they think,

a) in terms of a few months or the next election you "simply" have to think in a longer time frame.....

b) also they think in terms of neo-classical economics which is IMHO also broken,

c) then their is their right wing ideology which is really broken in terms of economics, hence voodoo......

these are all self-inflicted blinkers....so I think I have several advantages over them.......they have some big advantages though.....overwleming in some ways.

As I said earlier, for the next 5 years I see (severe) deflation due to debt, and then the effects of peak oil will destroy any hopes of growth.  Hence holding present day over-valued assets, commodities and shares makes no sense, there will be a huge panic and collapse of the share market at some point, this will trigger hosuing price collapse.

Now once we reach bottom, a Govn is going to be looking very hard for things to tax....and/or they will print.....so 5 to 8 years hence getting out of cash seems the best option, almost compulsory IMHO....  For me buying houses seems possible.....but thats a tangable asset Govn/council can tax just on you holding it.....gold of course is tax free in this respect but you have to hide it or it will be confiscated and it has no income.

Risky, yes, sure, but then there is gambling.....I dont do gambling.

Pity those who got in on the MSM spin that buying a house was the best thing you can ever do, the more the better, up the ladder and all that.  They have been seriously misled.  The opposite was the truth, and yet was never mentioned by the MSM.

No I dont agree.....I think paper will have value for some years depending in the two unfolding scenarios that are most likely.  If its Japanese style slow deflation ie <-5% per annum, cash will retain value and in fact be worth more each day. If we have a real depression (most likely) then we will see >10% deflation per year in assets and commodities while cash retains value.   Once at the bottom then we might well see inflation, but thats years away.....

Bernard, if we get inflation above our trading partners then its hell for exporters, we have so 'been there done that'.  As long as commodities stay this high then we will overproduce, look at the phosphate market.

These concerns re-emerged on Monday, when the chairman of China's potash industry association was revealed to have predicted Chinese production of the nutrient of 6m tonnes this year – 50% above the forecast of sector giant PotashCorp.

Uralkali, targeting leadership in world potash, revealed its output of the nutrient had edged 4% higher – even as China defied common market thinking by revealing that sector may be about to produce too much for its own good.

However, the expansion plans come amid a warning from China, the world's top potash consumer, of overcapacity ahead – thanks to its own efforts to lift output and reduce its reliance on foreign shipments.

Wei Chengguang, chairman of China's potash industry association, told a conference in Shanghai that the country's potash production may hit 6m tonnes this year, and surge to 13.5m tonnes by 2015.

Ive a friend who has climbed into Potash stocks, he may need to re-think.

This will be Deflationary.