Westpac economists said they expect the Reserve Bank of New Zealand's tone to become 'more hawkish' over coming months as the differences between its views on the economic outlook and those of the Reserve Bank of Australia return to the "same page". Westpac Chief Economist Brendan O'Donovan and Senior Economist Sharon Zollner said they think the RBNZ will have more work to do than the RBA once monetary policy tightening starts later this year (for the RBA) and during 2010 (RBNZ). However, they said New Zealand's economic growth would likely outperform Australian growth over the coming year as New Zealand is coming off a lower base due to its deeper downturn, and because NZ is experiencing a bigger net migration boost than Australia. Recent comments from RBA Governor Glenn Stevens have markets expecting the RBA to raise interest rates by December, while RBNZ Governor Alan Bollard reiterated his 'low till 2010' expectation at the RBNZ's latest Monetary Policy Statement on September 10.

"A surge in business and consumer confidence to the highest levels since 2007 was probably the most significant development leading to such a sharp reversal in the RBA's tone," O'Donovan and Zollner said. "Crucially, business and consumer confidence in New Zealand has now also surged. Will the RBNZ stage an equally dramatic change in tone in their October OCR review?" Here is O'Donovan and Zollner's conclusion after comparing a number of economic issues facing both central banks; inflation, world outlook, commodity prices, exchange rates, net migration, housing markets and structural imbalances:

In sum, the two economies have many similarities currently, particularly the behaviour of the exchange rate and the housing market. The advantages the Australian economy is currently enjoying relative to NZ are: "¢ Less extreme structural imbalances (but implications for monetary policy are unclear); "¢ Stronger commodity prices and terms of trade thanks to a greater exposure to developing Asia. Despite this, NZ growth is likely to outperform over the coming year for two reasons: "¢ NZ is coming off a lower base, having had a deeper recession; "¢ NZ is experiencing a bigger net migration boost. Are these factors likely to persist? Structural imbalances: this is clearly worrying Alan Bollard a good deal more than Glenn Stevens "“ which is quite understandable. However, it is far from clear what the interest rate response should be, if any. It's the old chestnut that the RBNZ cannot control the mix of monetary conditions. Commodity prices: we see the risks to both the RBA's and RBNZ's forecasts as on the same side, as both depend heavily on the outlook for growth in China. However, NZ's food exports are more exposed to the rising tide of trade protectionism around the world. NZ catch-up: NZ can afford to have more stimulatory monetary conditions than Australia, given the more substantial slack in the NZ economy. However, it could well be that the slack disappears fairly quickly in an agricultural/dairy bounce-back. That said, we see labour market weakness persisting for some time. It is important that the RBNZ bear in mind that they have a bigger tightening job to do once they get going, with the cash rate starting further below its average or neutral level than in Australia. Net migration: that Australian employment is expected to outperform NZ's is, on the face of it, a substantial risk to our view that the number of Kiwis heading over the Tasman will remain subdued over the coming year. However, it is important to note that employment in Australia is still expected to keep falling over the next year "“ meaning an even worse labour market here may provide a strong "push" factor, but jobs will not be plentiful over the ditch either. On the whole, the NZ and Australian economies will likely perform more similarly over the next year than they have in the year past. Conclusion: Getting back onto the same page In the last MPS the RBNZ already took large steps closer to the RBA's position: they have adopted Consensus forecasts rather than taking their own much more pessimistic view, and they have given up on talking the exchange rate lower. The main unresolved disparity is that the RBA appears less sceptical about the durability of the global recovery, at least in trade-weighted terms. It should become clearer over the next six months, as the inventory cycle peters out, who is right. Market pricing doesn't necessarily validate the views of the central banks but does suggest the differences are being given some credence. Pricing suggests the RBA will tighten first: by the start of December this year versus March 2010 for the RBNZ. In Australia's case, market pricing of a hike late this year is consistent with the rhetoric coming from the central bank, but NZ market pricing of a hike in March is much more hawkish than the RBNZ, who continue to reiterate that they do not expect to raise rates until the latter part of 2010. We suspect both sides will have to give. The RBNZ's "˜promise' is losing credibility fast, but they may well surprise the market by digging in their heels for longer than is currently anticipated.

Here are three of the charts O'Donovan and Zollner refer to: 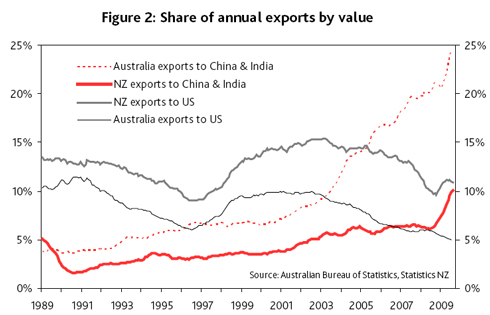 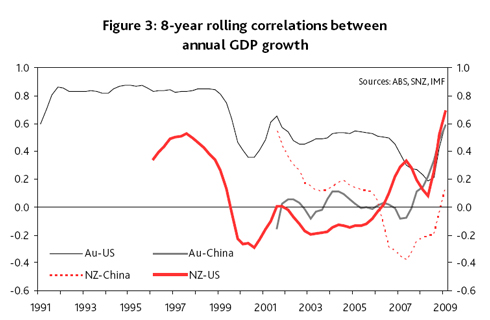 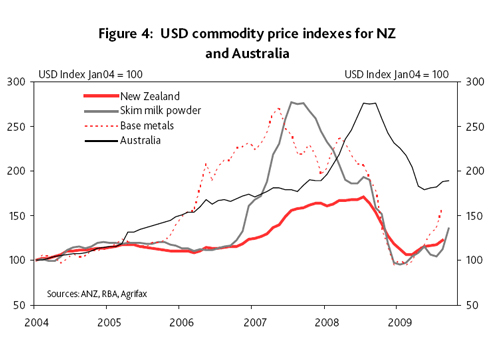