Here are my Top 10 links from around Internet at 10 am. I welcome your additions in the comments below or please send me your suggestions for Wednesday's Top 10 at 10 to bernard.hickey@interest.co.nz We don't waste time with meetings at interest.co.nz. We just shout across the room. Works every time.

1. The NZX has proposed to the Capital Markets Taskforce that it give up a range of its regulatory powers to the Securities Commission and the Reserve. Here's the full discussion paper and here are the key proposals:

1. Removal of NZX from the area of supervising the advice component of NZX Participants, with that function potentially moved to the Securities Commission; 2. Removal of NZX from the area of supervising the prudential capital and client funds areas of NZX Participants, with that potentially moved to the RBNZ; 3. Consolidation of the approval of capital raising documentation between the Securities Commission and the Companies Office, with NZX's role clarified and limited to Listing Rules such as they may differ from legislation in certain respects; 4. Removal of the current enforcement function from NZX, with it moving to either the Securities Commission or a newly formed body that focuses only on enforcement; and 5. Clarification of the scope and remit of oversight reviews across NZX and potentially other regulators.

This may please some of the NZX's critics that it cannot both be the market operator with a profit function and a market regulator with a safety and transparency function. But do we really think the Securities Commission will do a better job. The finance company debacle happened on the watch of the Securities Commission and the Companies Office within the MED. 2. Meanwhile NZX critic Bruce Sheppard told James Weir at the DomPost (Stuff) that New Zealand needs an independent sharemarket supervisor

The Securities Commission should take over the job of market supervision from the NZX, Mr Sheppard said, as a first step toward one regulator rather than many.

It takes foresight, hard work and courage to get ready for a green and carbon-constrained future. For GM to survive--and for American taxpayers to avoid having to bail it out again--it will have to completely overhaul its portfolio. Developing one new green model, the much-hyped Chevy Volt, will not be enough, especially when the Warren Buffett-backed Chinese firm BYD has already produced a similar vehicle. No, GM's only hope is to design all its cars to reduce resource use in the supply chain, require less energy to manufacture and, of course, need much less or no gas to drive.

4. Meanwhile GM is mucking around the German-government backed plan to sell Opel to Canadian and Russian interests. The FT reports GM, which is itself out of bankruptcy, may want to hold on to Opel with British, US and Spanish help. Plus ca Change.

The US carmaker and its advisers are studying a scenario that would see GM abandon the German plan and instead raise roughly â‚¬3bn ($4.3bn) of rescue funds for Opel and its British Vauxhall brand from the US and other European governments, including the UK and Spain.

The death spiral began after the Federal Housing Administration suspended Taylor Bean's authority to issue FHA-insured loans. That was immediately followed by notices from Ginnie Mae and Freddie Mac suspending Taylor Bean as an issuer of mortgage-backed securities and a mortgage servicer. aylor Bean was one of the largest independent home-loan providers before it closed down its mortgage-lending operation Wednesday in the wake of the FHA move. Among originators of FHA mortgages, Taylor Bean was the third-largest, and it was the nation's 12th-largest home-mortgage lender overall, according to Inside Mortgage Finance, a trade publication.

6. Nouriel Roubini has warned again in an FT OpEd of a double-dip recession as governments try to unwind the massive amount of stimulus they have pumped into economies all over the world.

There are also now two reasons why there is a rising risk of a double-dip W-shaped recession. For a start, there are risks associated with exit strategies from the massive monetary and fiscal easing: policymakers are damned if they do and damned if they don't. If they take large fiscal deficits seriously and raise taxes, cut spending and mop up excess liquidity soon, they would undermine recovery and tip the economy back into stag-deflation (recession and deflation). But if they maintain large budget deficits, bond market vigilantes will punish policymakers. Then, inflationary expectations will increase, long-term government bond yields would rise and borrowing rates will go up sharply, leading to stagflation. Another reason to fear a double-dip recession is that oil, energy and food prices are now rising faster than economic fundamentals warrant, and could be driven higher by excessive liquidity chasing assets and by speculative demand. Last year, oil at $145 a barrel was a tipping point for the global economy, as it created negative terms of trade and a disposable income shock for oil importing economies. The global economy could not withstand another contractionary shock if similar speculation drives oil rapidly towards $100 a barrel. In summary, the recovery is likely to be anaemic and below trend in advanced economies and there is a big risk of a double-dip recession.

7. The Bank of Israel raised its key interest rate by 25 bps to 0.75% overnight as inflation worries grew. It became the first central bank to raise its key rate as signs emerge that the global recession is beginning to ease. 8. Labour MP Charles Chauvel has proposed capping the interest rate lenders can charge under a consumer credit contract at 48%. Fair enough. 9. Oil prices hit a 10 month high yesterday, with US crude rising 39 cents to near US$75 per barrel, Reuters reported. 10. America has a real problem with income inequality caused by the profit share rising in recent years and massive jumps in bonuses for management, which in turn encouraged many in the middle classes to ry improve their standards of living by taking on more debt. Paul Krugman at the New York Times has a cracking chart here on inequality. Why aren't Americans revolting against the greed of Wall St's bankers even after a crisis they caused. The bonus culture is back with a vengeance. 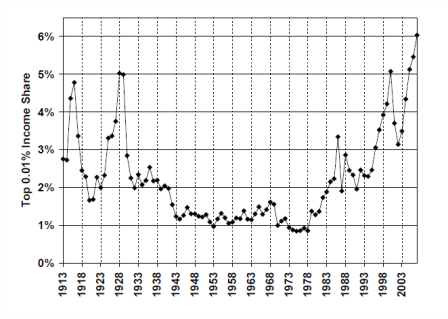