Here's my Top 10 links from around the Internet at 10 am. (My apologies for lateness Wally. Had to take my daughter to the doctor) I welcome your additions in the comments below or please send any links for tomorrow to bernard.hickey@interest.co.nz I hope I'm not an idiot with an anger management issue.

1. No one can say I'm unbalanced. Here is an attack on Nassim 'Black Swan' Taleb, who I've featured several times on Top 10 at 10. The attack from Scott Locklin is both high falutin and down and dirty at the same time. HT Felix Salmon

Taleb thinks all of quantitative finance is nonsense and we should do away with quants. I am guessing the former's delusions had something to do with drinking the same Berkeley tapwater in the 1960s which made everyone else believe in crazy things, but Taleb was a trader, and it's a common prejudice of traders to dislike quants for cutting into their P/L.

2. Here is some grand theatre in a CSpan video on Youtube from Ben Bernanke's Congressional hearing overnight where Congressman Alan Grayson grills Bernanke over currency swaps with various central banks, including "New Zealand, who got US$9 billion or US$3,000 per person" (2mins 31). It's a fascinating watch and all part of the growing momentum to audit the Fed. This will go viral.

3. Here's an excellent piece from the Washington Post on how close the Federal Reserve Bank of New York is to Wall Street. It's run by Goldman 'Vampire Squid' Sachs' chief economist William C. Dudley. HT ZeroHedge.

"The New York Fed sticks out as being not just very, very close to Wall Street, but to the most powerful people on Wall Street," said Simon Johnson, an economist at MIT. "I worry that they pay too much deference to the expertise and presumed wisdom of a sector that screwed up massively." Even some former insiders at the Fed say the bank does not pay enough attention to the fundamental flaws in the country's financial system or to the risks associated with bailing out financial firms -- for instance, the chance that banks will be encouraged to take more unwise gambles. These experts worry that the New York Fed has adopted the mindset of a trading floor: well attuned to ripples in financial markets but not to long-term trends and dangers. Last month, for instance, Wall Street bond traders wanted the central bank to ramp up its purchase of Treasury bonds, which would help the traders by driving up prices. But Fed officials in Washington and around the country concluded that such a move would be counterproductive in the longer run, in contrast to some New York Fed staffers, whose views more closely mirrored those on Wall Street.

4. Jeremy Warner at the Daily Telegraph writes that the banking system won't be emerging from intensive care any time soon.

An extreme shortfall, or "funding gap", has opened up which taxpayers have had to fill. These actions have prevented a full-scale collapse, but the system of private credit creation remains badly injured with no obvious way of repairing the damage. As the FSA's director of banking, Tom Huertas, has pointed out, the totality of this public support is already close to £1.3 trillion, or virtually as big as Britain's entire annual GDP. A bewildering alphabet soup of schemes has been put in place to counter the contraction in private provision of credit. Yet mind-boggling though these numbers already look, they still understate the true magnitude of the problem. In promising that nobody will lose a penny as a result of the banking crisis, the Chancellor has in effect underwritten the liabilities of the entire UK banking system, amounting to a multiple of several times the size of GDP. The balance sheet of Royal Bank of Scotland alone is worth around 1.5 times GDP. Even the combined might of the British taxpayers would be incapable of honouring this promise, which therefore amounts to no more than a confidence trick. It's a bluff which the Government had better hope the markets never call.

5. There's an excellent series of videos being broadcast on PBS in the United States of a film by economist and historian Niall Ferguson (below) Here are all the episodes online. PBS is doing fantastic work on the crisis and, unlike most other broadcasters, is putting it all online for free. Good on them.

"The U.S. recession may not be coming to an end and there is a risk the economy may experience a "double-dip" contraction, said Martin Feldstein, a professor of economics at Harvard University. The economy could "flatten out" or "even be positive" in the third quarter, and then it's likely to contract again in the last three months of the year as the effects of the federal stimulus program wear off and companies finish rebuilding inventories, he said. "There isn't going to be enough to sustain a really solid recovery," he said, even though recent data has provided some "good news" on the economy. . . "

7. Here's Daniel Gross at Newsweek giving a personal view on why the Japanese economy is not recovering. Japan has a massive demographic problem with an ageing population, a low birthrate and virtually no immigration.

Chalk it up to age, or to culture, but Japan strikes me as strangely passive about the huge changes it is facing. I heard plenty of bromides about the need for new policies toward both immigration and work-family issues, but no real policies. "The ongoing issues of the lower birthrate and the aging society have been going with such speed that the national design of how to respond to that has not caught up yet," said Yuriko Koike, a television reporter turned politician (Japan's first female defense minister) and one of the most prominent women in public life. As befits a nation riven by geological faults, the focus seems to be on planning to use technology to manage the impact of unstoppable events rather than averting them. In Toyota City, where robots do 90 percent of the welding work on Priuses at the Tsutsumi plant, I asked a city official how demographic changes would affect the delivery of health care. He responded, only partially in jest: "Maybe the robots will take care of us." 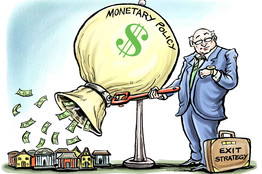 8. Here's Ben Bernanke's Op-Ed in the Wall St Journal on his exit strategy, again for balance.

My colleagues and I believe that accommodative policies will likely be warranted for an extended period. At some point, however, as economic recovery takes hold, we will need to tighten monetary policy to prevent the emergence of an inflation problem down the road. The Federal Open Market Committee, which is responsible for setting U.S. monetary policy, has devoted considerable time to issues relating to an exit strategy. We are confident we have the necessary tools to withdraw policy accommodation, when that becomes appropriate, in a smooth and timely manner. Overall, the Federal Reserve has many effective tools to tighten monetary policy when the economic outlook requires us to do so. As my colleagues and I have stated, however, economic conditions are not likely to warrant tighter monetary policy for an extended period. We will calibrate the timing and pace of any future tightening, together with the mix of tools to best foster our dual objectives of maximum employment and price stability.

9. The US Treasury has unveiled details of a plan to overhaul regulation of ratings agencies, the WSJ reported. This came as Standard and Poor's upgraded its rating on some mortgage bonds to AAA less than a week after downgrading them to BBB-.

Separately, the Treasury Department unveiled details of the Obama administration plan to overhaul regulation of credit-ratings firms by requiring increased disclosure and stronger oversight. The proposed legislation, sent to Congress on Tuesday, would ban ratings firms from providing consulting services to companies they rate and require the ratings firms to disclose fees that issuers pay to obtain ratings. Ratings reports would have to include a history of issuers' fee payments dating back two years. It also calls for disclosure of preliminary ratings sought by firms engaging in "ratings shopping," in which companies seek a range of preliminary ratings, paying for only the highest.

10. This is a fascinating little comment from the WSJ from Singapore, which has quietly decided not to appoint former BHP boss Chip Goodyear to run its monster Sovereign Wealth Fund Temasek. The previous CEO was the wife of the Prime Minister and therefore the daughter in law of Lee Kuan Yew, Singapore's founding father (and still very much on the scene.) I watch this a bit because I worked in Singapore from 2003 to 2004 for Reuters. A strange place. Outwardly western and democratic, and yet not...

Under Singapore law, Temasek isn't obligated to release any financial data at all. But if Ms. Ho wants to send a message to taxpayers that Temasek is still on a reform path, she'll assure them that Mr. Goodyear's appointment wasn't merely an aberration from opacity as usual.