Here's my top 10 links from around the Internet at 10 am. I welcome your suggestions in the comments below. 1. Alan Kohler from BusinessSpectator also does a regular video with ABC news in Australia. In this video from Friday he puts the boot into New Zealand's poor economic performance, with some justification. In this commentary at BusinessSpectator he does it in much more detail and lumps us in with Fiji. Thanks Alan.

2. John Key tells the FT.com in an interview (behind their subscription firewall) that the government will not be delivering any more fiscal stimulus in its May 28 budget because New Zealand did not want to provoke Standard and Poor's into downgrading our credit rating. Here's our version of the story. 3. A detailed discussion over at Mike Shedlock's Mish's Global Economic Trend Analysis about recent signs of deflation globally. Here's his conclusions and a frightening chart showing money supply growth so far out of step with historic norms as to be ludicrous. 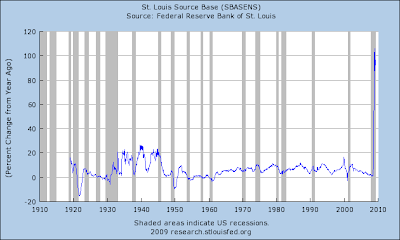 This expansion of money to bailout banks is not going to cause hyperinflation or even strong inflation for reasons outlined in Fiat World Mathematical Model. However, these foolish actions cannot possibly do anything good for the majority of taxpayers. All it can do is prolong the recession (depression) and increase national debt just as happened with Japan's deflation fighting efforts.

4. Felix Salmon at Reuters has an excellent think piece on the fancy mathematical modeling that tripped up so many banks and hedge funds. He makes some interesting points about whether this reliance on risk modeling by banks should still be used as heavily as it is in Basel II. Here's a taste.

If the purpose of regulation is to avoid market failures, we cannot use, as the instruments of financial regulation, risk-models that rely on market prices, or any other instrument derived from market prices such as mark-to-market accounting. Market prices cannot save us from market failures. Yet, this is the thrust of modern financial regulation, which calls for more transparency on prices, more price-sensitive risk models and more price-sensitive prudential controls. These tools are like seat belts that stop working whenever you press hard on the accelerator. The problem is that it's very unclear what the alternative is. The lesson of the failure of Basel II is, indeed, that you can't trust banks to judge their own internal risks very well. But the whole reason why Basel II was created in the first place is that financial instruments are so complicated these days that it's very easy to do an end-run around simpler regulations. My feeling is that the best way to go is to set some very clear and simple rules, much as the Spanish central bank did, and refuse to allow banks to build enormous businesses doing things that the regulators don't understand. And secondly to place a cap on banks' balance sheets "” I think something around $300 billion is reasonable, and that there's no reason why any bank should be bigger than that.

5. I'm not sick. Really I'm not. That's the message from a stressed sounding ruler of Dubai in this Reuters story. If there is a bubble economy in the Middle East it is Dubai. 6. Paul Volcker has come back off his fishing trip and said the current US Federal Reserve Act should be reviewed after the Fed took on US$2.19 trillion of assets inside a year without Congressional approval, Bloomberg reports. 7. The always excellent Rolfe Winkler at Option ARMageddon points out BankUnited has been been given 20 days to live by US regulators, in this filing. BankUnited has US$14 billion of assets and if it fails it would be the biggest US banking collapse since WashingtonMutual. Here's the SEC filing Winkler gets his details from. 8. An interesting piece here on Portfolio.com about the creation of microcurrencies such as 'Craigbucks' for use on craigslist instead of the US dollar. Another sign that people are talking about the end of the hegemonic role of the US dollar. 9. Here's how Citigroup used some fuzzy (albeit legal) accounting methods to make a US$1.6 billion profit in the March quarter, according to the New York Times. I simply don't believe the US banking crisis is over. See link 7. 10. There is one item on sale in the United States where prices and volumes are booming: automatic weapons. Fearing Barack Obama will reimpose a ban on the sale of assault weapons, gun collectors et al are buying them up at a brisk rate. The price of a European made AK47 has doubled to US$700 in the last 6 months. Finally, something to invest in, the Wall St Journal reports.