Top 10 at 10: Be lenient on rich bankers; Another nail in PPiP; Massive bio-diesel rort; GST for Aussie banks?

Top 10 at 10: Be lenient on rich bankers; Another nail in PPiP; Massive bio-diesel rort; GST for Aussie banks?

7th Apr 09, 10:00am
by Bernard Hickey
Here's my top 10 links from around the Internet over the last 24 hours or so, starting with the brilliant KAL in The economist.  I welcome your additions below. 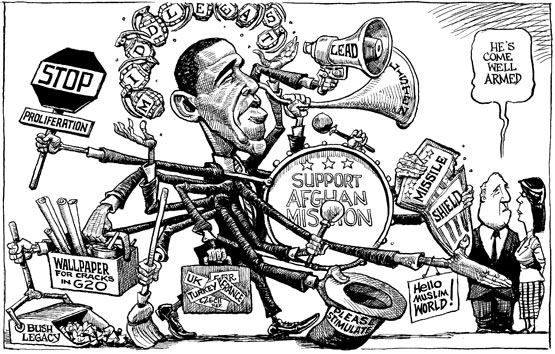 Paul Krugman at the New York Times delivers another sensible broadside against the PPIP (Public Private toxic debt plan), arguing it attempts to lift the value of all toxic assets, thus delivering a profit to even those banks that don't need the help. The Economist explains why the masses should be very angry with investment bankers and the politicians who encouraged them to privatise the profits and socialise the losses. But then it pulls its punchers, arguing leniency for the rich. Hmmm. Where's a sharp guillotine when you need one? Obama's economics team, particularly Tim Geithner and Larry Summers, will be lucky to last the year. Here's another skeleton in Summers' past as the head of the now wobbly Harvard fund, as pointed to by The Big Picture. A sign of the times: A new restaurant in New York advertised for 43 busboys, waiters, bartenders etc and got over 900 responses from former investment bankers, real estate brokers, professors and other wildly overqualified New Yorkers, according to the always excellent DealBook. Another example of the venality and corruption of America's corporate and political elite. Billions of American taxpayer dollars are now going to US paper mills who are putting biodiesel unnecessarily into a byproduct of paper-making to claim a tax credit, as TheNation.com reports. Kill the PPiP now before yet another scheme is created for US investment banks to rort the US taxpayer. Here's the always excellent Alex Salmon at Portfolio.com pointing to an FT.com story that US banks are preparing to buy toxic assets off each other with the government subsidy so they can profit from it. Here's a bitter taste of Salmon's view.

...the biggest fund managers will be perfectly happy to deliberately overpay for toxic assets so long as that prevents them from having to take large losses on all the bank debt (and even equity) that they own. Looked at this way, the combination of letting banks bid on each others' toxic assets, along with the weakening of mark-to-market rules, will serve to maximize opacity, minimize the chances that insolvent banks will be revealed as such, and render the government's stress tests an exercise in rubber-stamping utterly unrealistic balance sheets. The risks of a Japan-style lost decade seem higher than ever.

The unmissable Paul Krugman on why China will have to just suck up America's toxic Treasuries. Ian Rogers at TheSheet in Australia thinks out loud about whether Australian banks should start paying GST. Here's an excellent cartoon from Chris Riddell at The Observer 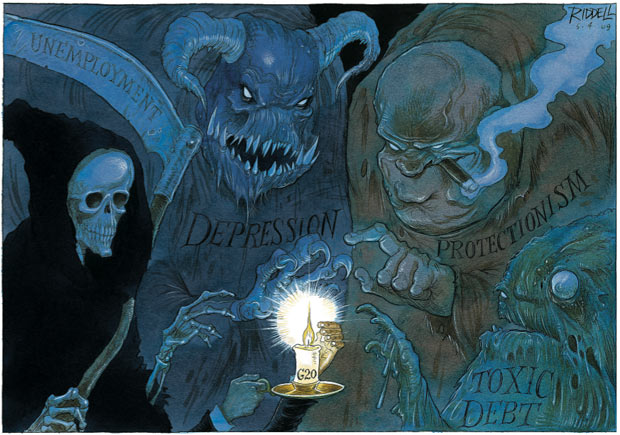