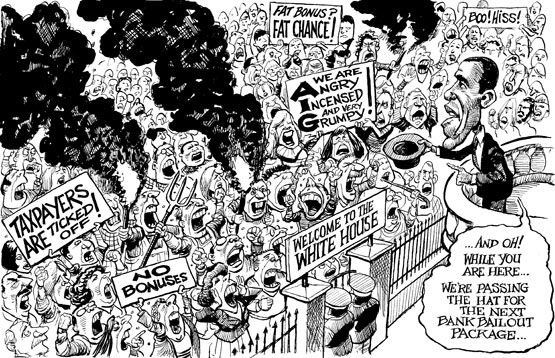 Turning Japanese is a bad idea William Pesek at Bloomberg, who I believe is based in Tokyo, has a thoughtful piece here on why he thinks the Obama/Geithner toxic debt public-private bank plan won't work. His argument is it didn't work in Japan and it won't work in the United States. Essentially, he says, the bankers who generated the toxic debt are covering it up and will remain zombies until the government nationalises the bank and fires the bankers. I agree. Here's a taste.

The Obama administration's new plan to remove toxic assets from banks' balance sheets is going over well on Wall Street. President Barack Obama and Treasury Secretary Timothy Geithner deserve more time to fix highly complex faults that were 20 years in the making. Their trust in the honesty and competence of bankers is all very pre-1998 Japan. A more hands-on, show-us-your-books-now approach is needed. Only then will the White House know the true extent of the crisis, and which bankers are hiding what. It took Japan about five years to regain control over its financial system after the Asian crisis. It's also worth noting that even today banks are reluctant to meet Japan's credit needs. Getting America's bankers to fess up now is a priority. Two, start firing people. The trouble with putting off the nationalization of banks is that it delays getting rid of the executives who helped create this mess. Also, AIG's argument that it needs to retain the best and brightest with big bonuses is bunk. Look no further than Thailand and South Korea. The wisest thing Thailand did to recover from the 1997 Asian crisis was to close or consolidate banks and toss out management. Korea took similar steps, which allowed the government to grasp the depth of its banking woes. The arrival of outsiders began the healing. Officials in Seoul also worked to rein in the opaque, family-run conglomerates towering over the economy. Trusting AIG's or Citigroup Inc.'s management -- or those of other troubled institutions -- is like failing to realize why your star trader never takes a vacation. Only when he's out for a few days can you see the investment losses he may be hiding. Rogue traders Nick Leeson and Jerome Kerviel weren't workaholics; they were concealing dodgy dealings.

China asserts itself before the big G20 meeting China's central bank governor has hammered the West for not doing enough to stimulate their economies in a move commentators say is China flexing its muscles ahead of the G20 meeting in a few days. Here's the Bloomberg version Irish economy ugly Ireland's economy shrank a record 7.5% in the December quarter from the same quarter a year ago as its housing sector and financial sector crashed, the BBC reported. US economy almost as bad The US economy contracted 6.3% in the December quarter from a year ago, the SMH reports. It makes New Zealand's 1.9% fall in the December quarter look like chickenfeed. Out of the shadows Alan Kohler at businessspectator points out that Geithner's plan to regulate all financial institutions will destroy the world of 'shadow banking' that was occupied until now by hedge funds, private equity funds and derivatives traders. Big ones will be heavily regulated. Now the Europeans prepare to print too Ambrose Evans-Pritchard at The Telegraph watches the European Central Bank closely (mainly because he would like to see it dismantled) and finds that the ECB looks set to finally abandon its objection to printing money. If true, this is big news. I'm not such a fan of money printing as Evans-Pritchard is, but worth knowing.

Two key governors tipped us off today that the bank is ready to buy assets outright on the open market, including mortgage debt. This is a huge development, exactly what is required to help restore the animal spirits of global investors. Until now the ECB has offered unlimited liquidity in exchange for collateral from banks. That is not the same thing at all. It is sterilized stimulus. The bank has adamantly refused to cross the Rubicon by scattering money through the economy in real blast of QE. (quantitative easing)

Russian debacle near Hundreds of the biggest Russian banks are set to go under with state bailouts, the FT.com reports. Roubini sceptical on Geithner plan New York University professor Nouriel Roubini is sceptical about the Obama/Geithner toxic bank plan. He says it won't save some of the biggest insolvent banks once stress tests show they're insolvent. "Some banks are going to have to be nationalized and for them the plan doesn't apply," Roubini said in this Bloomberg piece. America's burning Americans are torching their cars to get the insurance money....seriously it's a big problem now for police and the environmentalists, not to mention the insurance companies. This in the Wall St Journal. How to game the Obama/Geithner plan BreakingViews writes a friendly piece explaining how sharp individuals could game the Obama/Geithner toxic debt plan. Read it and weep at the unintended consequences. Here's a (bitter) taste.

The first game is for banks. A bank sells $7 million in so-called legacy loans. It then reinvests $1 million of the proceeds in a fund, receives another $1 million in equity from the government and borrows $12 million with a guarantee from the FDIC. The fund then buys $14 million in loans that are nearly identical to the ones the bank sold, paying the same price if it can. The bank can now reap half the gains on a $14 million portfolio, rather than retaining all of the upside from its original $7 million of loans. But it has capped its downside at $1 million, rather than $7 million.