Here's my top 10 links from the last day or so from around the Internet. I welcome your additions in the comments below. Just copy and paste the URL. It'll work. 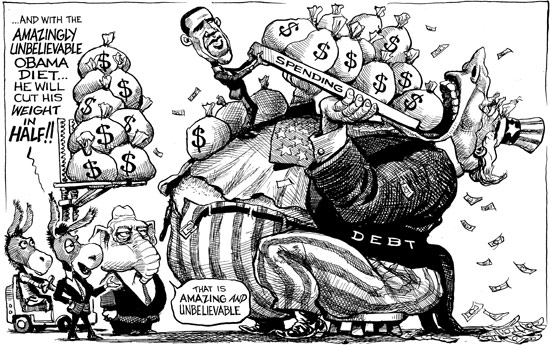 Legalise drugs, says the Economist This will prove to be an influential piece, just as the Economist's call for gay marriage years ago was. The Economist is saying the war on drugs has failed and should be abandoned. I agree. We should have a proper and reasoned debate about this. The Economist has started it in this editorial titled How to Stop the Drug Wars ... I hope.

This newspaper first argued for legalisation 20 years ago. Reviewing the evidence again, prohibition seems even more harmful, especially for the poor and weak of the world. Legalisation would not drive gangsters completely out of drugs; as with alcohol and cigarettes, there would be taxes to avoid and rules to subvert. Nor would it automatically cure failed states like Afghanistan. Our solution is a messy one; but a century of manifest failure argues for trying it.

The Great American Ponzi scheme Rolfe Winkler at OptionARMaggedon makes some excellent points about the attempts to fix the debt problems by printing money and governments borrowing more to spend more. It's a waste of time.

The great Ponzi scheme that is the Western World's economy has grown so big there's simply no "fixing" it. Flushing more debt through the system would be like giving Madoff a few billion to tide him over. Or like adding another floor to the Tower of Babel. To what end? The collapse is already here. The question is: How much do we want it to hurt? Using the public's purse to finance "confidence" in a system that is already kaput may delay the Day of Reckoning, sure, but at the cost of multiplying our losses. Perhaps fantastically. Bottom line"¦.We can bankrupt ourselves propping up a system that is collapsing anyway, or we can dig ourselves out of debt, if not with higher interest rates then certainly with fiscal austerity. That would be a hard sell to the American people, I know. But deep down, Summers and Geithner know it is the right thing to do. It is, after all, the prescription they wrote for emerging markets facing financial crises. It's long past time we took our own medicine. If we don't take it voluntarily, the bond market will stuff it down our throat anyway.

I couldn't have said it better myself.

An investment banker bought this chair for US$28 million This chair was bought at a Christies auction for US$28 million a couple of weeks ago by, it seems, Henry Kravis of "Barbarians at the Gates" Kohlberg Kravis Roberts. This private equity firm has bestrode the world of global finance for decades. This chair was designed by Eileen Gray in 1917-19 with a sort of oriental flavour (you can tell I'm not from the art world.) Here's how Christies described it.

The armchair distils all that was so personal and so magical in the first, intimately expressive phase of Miss Gray's career -- surprising, imaginative, subtly sculpted and crafted, it is a masterpiece of invention and execution. The dragon has a history in Chinese iconography as a symbol of strength and goodness, with the power to protect and to guard. The dragon is often illustrated toying with a pearl (zhu) which in turn is a symbol of strength associated with the moon and with thunder; this ovoid jewel can represent omnipotence or the light of the moon. The entire sculptural form of the present armchair could be interpreted as representing a pearl within its shell, encircled by the dragons. The stylised clouds on the bodies of the dragons call to mind the clouds, often accompanied with flame motifs, that are a regular feature of traditional Chinese imagery.

It's a different world that is now subsidised by taxpayers. Surely this kind of excess will end. S&P 500 headed for 600, says Roubini The real 'Dr Doom, Nouriel Roubini, has forecast the S&P 500 could hit 600 later this year. See more here at Bloomberg. Here's a taste of the real thing at his subscription-only RGE Monitor site.

What are the downside risks and the upside risks to these bearish predictions for US and global equities. On the downside we have argued here that there is at least a third probability of a L-shaped global near depression rather than the mere current severe U-shaped recession. If a near depression were to take hold globally a 40% to 50% further fall in US and global equities from current levels could not be ruled out. But in this L-shaped near depression the last thing one would have to worry about would be stock markets as more severe issues would have to be addressed (unemployment rates in the mid-double digits "“ 15% or above - and multi-year stagnation and deflation).

This needs to be shut down NOW The Dominion Post reports that the nine day fortnight has developed inside the bowels of John Key's department into a subsidised "10th day allowance". The idea is the employer will decide to put people on a 9 day fortnight and the government will pay an 'allowance' to the employee for the 10th day. Heaven help us. Someone needs to kill this lunacy now. The last thing we need is a new bunch of bureaucrats deciding which attempt at gaming government will get taxpayers money. Here's more detail on this mess.

Workers in struggling businesses are tipped to receive a Government "allowance" to soften the blow of losing a day's pay under plans for a nine-day fortnight. The Government will announce the details of its flagship jobs summit policy within days, and Prime Minister John Key has confirmed that while job subsidies are off the table, an allowance is possible. The Government has ruled out a wage subsidy on the grounds of cost, but is considering an allowance based on a "benchmark", such as the average or minimum wage. Government sources say a 100 per cent wage subsidy for the lost day's pay is too expensive and would send the wrong signals to business, which might see it as an opportunity to trim wage costs by getting the Government to pick up the tab.

Meanwhile, the World Bank said the global economy would shrink in 2009 for the first year since World War Two, the BBC reports.

Some commentators are now openly talking about the global economy slipping into a depression. Here's Rich Miller at Bloomberg on the prospect.

FTAlphaville has a nice piece on the increasing risks of corporate defaults. I hope all those bond investors in New Zealand corporate bonds are watching.