There but for the grace of god....Iceland nears bankruptcy

There but for the grace of god....Iceland nears bankruptcy 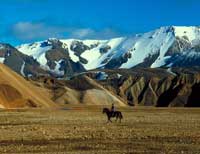 Iceland's government was forced overnight to seize control of the tiny island nation's biggest banks and declare the nation virtually bankrupt after years of running big current account deficits and allowing its banks to borrow heavily overseas. (Updated to include Russian loan and currency peg) Overseas banks have stopped dealing with Icelandic banks and the nation is now unable to pay for imports or transact across its borders. Later on Tuesday Iceland approached Russia for a US$5.4 billion loan and defloated its currency, pegging it to a basket of currencies.  "There is a very real danger, fellow citizens, that the Icelandic economy, in the worst case, could be sucked with the banks into the whirlpool and the result could be national bankruptcy," Prime Minister Geir Haarde said in a televised address. "Queues formed at petrol stations as Icelanders rushed to fill up before reported fuel shortages, while savers who tried to withdraw money from banks or sell bank shares on the internet found websites were not working," The Times reported. Here's what Fitch said about Iceland's 15% current account deficit in 2006 and why it needed to downgrade the outlook for its AA credit rating. "Fitch believes that other highly rated countries like Australia and New Zealand display similar, albeit less extreme external financial constraints to Iceland, but the agency argues that the structure and hedging characteristics of these countries external indebtedness is much better documented than in Iceland," Fitch said. "Moreover, whereas Australia and New Zealand's economies have been successfully stress tested over a long period of time, Iceland has yet to establish a similar track record in more indebted circumstances. Such uncertainty accounts in large measure for the agency's decision to revise the outlook on Iceland's sovereign rating to Negative from Stable. " Iceland's currency, the krona, has fallen 30% in the last week. New Zealand's credit rating is AA plus and its current account deficit peaked at 9.3% in 2006. It is currently 8.4%..