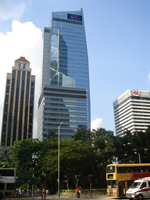 The US Federal Reserve will lend the world's largest insurer, American International Group (AIG), US$85 billion to avoid a catastrophic collapse of global financial markets. (Updates throughout with confirmation of rescue and nationalisation) In return the Fed will own a 79.9% stake and will recover the loan by the forced but orderly sale of AIG's assets over a two year period. The announcement after two frantic days of negotiations was aimed at preventing the bankruptcy of the world's 18th largest company. AIG is the counterparty on over US$500 billion worth of deals with other banks and owns US$1 trillion worth of assets. This is effectively a nationalisation by the US government of a company which isn't even regulated by a Federal authority. AIG owns insurance companies in New Zealand with about 7% of the market. They are expected to be sold to rivals here.AIG's shares lost over 75% of their value overnight as fears grew about bankruptcy and its shares have fallen 90% in the last week. Its position became perilous late yesterday after Standard & Poor's slashed its credit rating for AIG by 3 notches to A minus, forcing the insurer to come up with US$13 billion of collateral immediately. The Federal Reserve tried throughout yesterday to organise a privately funded bailout of AIG, but without success. The collapse of AIG would have had even bigger ramifications for global financial markets than the collapse of Lehman. AIG has sold other banks and other investors protection on US$441 billion of bonds and securitised mortgages, including US$57.8 billion of bonds tied to sub-prime mortgages. It is widely expected to write down the value of its mortgages by US$30 billion, yet has a market value of less than US$15 billion and saw its share price fall almost 90% in the last two days. S&P cited a "combination of reduced flexibility in meeting additional collateral needs and concerns over increasing residential mortgage-related losses." AIG has over US$1 trillion in assets, whereas Lehman Bros had just over US$600 billion. AIG has 116,000 employees and operates in over 100 countries, whereas Lehman had 26,200 employees. AIG owns the world's largest airline leasing operation with over 900 passenger and cargo jets. AIG had hired law firm Weil Gotshal to draw up bankruptcy papers. Here's what Stephen Bartholomeuz over at businessspectator.com.au had to say about why AIG was different from Lehman Bros.

To put AIG's significance to the global system into context, the various estimates of losses to counterparties if it collapsed range from about $US180 billion to $US200 billion. Total losses from the credit crisis so far amount to about $US500 billion, although there is an expectation they will easily top $US1 trillion "“ without AIG's 'assistance'. Another way of looking at the cost of a collapse would be to say that it could wipe out the equivalent of more than half the capital raised by financial institutions globally to fill in the holes torn in their balance sheets by the crisis.

Here is the full statement below from the US Federal Reserve.

The Federal Reserve Board on Tuesday, with the full support of the Treasury Department, authorized the Federal Reserve Bank of New York to lend up to $85 billion to the American International Group (AIG) under section 13(3) of the Federal Reserve Act. The secured loan has terms and conditions designed to protect the interests of the U.S. government and taxpayers. The Board determined that, in current circumstances, a disorderly failure of AIG could add to already significant levels of financial market fragility and lead to substantially higher borrowing costs, reduced household wealth, and materially weaker economic performance. The purpose of this liquidity facility is to assist AIG in meeting its obligations as they come due. This loan will facilitate a process under which AIG will sell certain of its businesses in an orderly manner, with the least possible disruption to the overall economy. The AIG facility has a 24-month term. Interest will accrue on the outstanding balance at a rate of three-month Libor plus 850 basis points. AIG will be permitted to draw up to US$85 billion under the facility. The interests of taxpayers are protected by key terms of the loan. The loan is collateralized by all the assets of AIG, and of its primary non-regulated subsidiaries. These assets include the stock of substantially all of the regulated subsidiaries. The loan is expected to be repaid from the proceeds of the sale of the firm's assets. The U.S. government will receive a 79.9 percent equity interest in AIG and has the right to veto the payment of dividends to common and preferred shareholders.