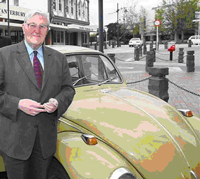 Diversified financier South Canterbury Finance, which has an investment grade BBB minus credit rating from Standard and Poor's, has reported a 75% rise in pre-tax profit and an average debenture reinvestment rate of 63.7% for the year to June 30. (Updated to include comments from CEO and CFO) South Canterbury Finance, which is controlled by renowned South Island investor and philanthropist Allan Hubbard, also said it had received its strongest inflows of new funds in two years. It said NZ$4.7 million of new funds were being invested every week on average during 2008. It also repeated reassurances about it having over NZ$400 million of cash or banking facilities on hand and how its shareholder equity had risen by NZ$49 million to NZ$252 million, while its assets rose 22% to NZ$2 billion. South Canterbury's strength and profitability contrast with other large finance companies that have collapsed or closed in the last two years. It raised NZ$525 million in fresh funding over the last 18 months through two local bond issues and bond issue into the US private placement market. South Canterbury Chief Financial Officer Graeme Brown told interest.co.nz new funds flow was as strong in 2008 as it was before finance companies started collapsing in mid 2006 and that South Canterbury's debenture reinvestment rate had been 60% since the closure of Hanover Finance. South Canterbury would also continue to look to diversify and deepen its sources of funding, including the potential for more bond issues and the potential to add another bank to its existing banking syndicate of the Bank of New Zealand and Commonwealth Bank of Australia, Brown said South Canterbury has over NZ$400 million of cash on hand or available in lines of credit from these banks. South Canterbury did own a stake in Dominion Finance, which is is now fighting to survive, but it was bought back by Hubbard's private company, the Southbury Group, at book value. The full press release on the result is below.

South Canterbury Finance Group has increased total assets by 22 per cent to $2.0 billion following a solid performance in a difficult operating year. Net profit before tax (NPBT) for the June 30 2008 year rose 75% over the same period last year to $82.7 million. This included a $40 million capital gain from selling a 12.75% share of Dairy Holdings in December last year. Chief Executive Lachie McLeod said that in spite of the turmoil in the finance company sector, South Canterbury Finance had enjoyed good demand for loans from the provincial areas. The normalised NPBT was only slightly down from the previous year. This was solely due to the additional holding costs for keeping large cash reserves and a cautious increase in provisioning, to compensate for a declining market. "2008 has been the year South Canterbury Finance established itself as a market leader in NZ. Our performance continues to be underpinned by strong support from investors (both domestically and offshore), from intermediaries and share brokers, institutional investors and borrowing clients. This ongoing support ensures we continue to strengthen our service offering. We see excellent opportunities in these areas over the next 12 months." Another big achievement in the 2008 financial year was the affirmation of an investment grade Credit rating by Standard & Poor's in June. "The rating recognises our ongoing focus on managing risk, our funding diversity and the quality of our historical and forecasted earnings. We have a great asset base which is well diversified by region and segment. The quality of these assets remains similar to historical levels." Mr McLeod said. The funding side of the business was also strategically refocused during the year under review. "Two successful forays into the listed bond market over the past 12 months and a new funding line from the US Private Placement market (which raised $525 million), have diversified our funding base. In addition, South Canterbury Finance continues to maintain over $400 million in cash and un-drawn banking lines." Reinvestment rates have been resilient and over the past 12 months have been an average of 63.7%. "Meanwhile, we are enjoying the strongest inflows of new investment funds we have experienced in the past two years. We are averaging $4.7m of new funds per week during the 2008 calendar year," Mr McLeod said. Highlights of the June 2008 full year included: "¢ NPBT of $82.7 million (up 75 percent from $47.2 million). "¢ Total assets at $2.0 billion, up 22 percent from $1.659 billion in June 2007 "¢ Standard & Poor's investment grade credit rating BBB- affirmed June 2008 "¢ Loan and leasing receivables up 11 percent from $1.3516 billion in June 2007 to $1.456 billion "¢ Bad debt write-offs and provision increased to 1.38 percent of Total Receivables from 0.83% at 30 June 2007 "¢ Equity increased by $49 million to $252 million "¢ Additional $525 million of new complementary funding sources over the 12 months Outlook Mr McLeod said the current financial year would be one that cements South Canterbury Finance's position as a market leader in New Zealand. "We expect to build on our strong presence by rebranding our nine regional subsidiaries to operate under the South Canterbury brand. "We are looking to continue our focus on good quality lending opportunities, improving our investment grade credit rating (first obtained in 2006), further developing our people and continuing to maintain the loyal support of our investor base. "Though we expect market conditions to remain difficult, the budget outlook for the current financial year is still a very positive $47 million to $50 million NPBT. This will be achieved through prudent lending in the heartland areas of New Zealand, where we are well resourced. "South Canterbury Finance is well positioned with over $400 million in cash and un-drawn banking lines. We will maintain strong cash reserves in the coming year and take a cautious approach to lending."