Top 10 at 10: What a Eyjafjallajoekull; US debt bombs; A Japanese-style balance sheet recession; Dilbert

Top 10 at 10: What a Eyjafjallajoekull; US debt bombs; A Japanese-style balance sheet recession; Dilbert

16th Apr 10, 1:44pm
by Bernard Hickey
Here are my Top 10 links from around the Internet at 10 to 2. I welcome your additions and comments below or please send suggestions Monday’s Top 10 at 10 past 1pm. bernard.hickey@interest.co.nz

1. Ashen cloud over Europe - And I'm not talking the Greek debt crisis. This volcanic eruption under the Eyjafjallajoekull glacier in Iceland is causing all sorts of grief. The Reuters video below has some great footage. I have enjoyed pronouncing Eyjafjallajoekull all morning... 2. Debt bomb - An economist (AS) blogging at The Economist is worried about the debt bomb building inside the finances of many US states.

Many states' finances are even more dire than the federal government's, but at least states and municipalities can default without triggering a sovereign debt crisis. It is credible that the federal government will not bail-out individual states. But the residents of many states probably face obscenely high taxes in the future. This expectation can undermine future growth because businesses and high earners can easily relocate to lower tax states. This is precisely why we should be very worried about the financial condition of state pension plans. Their projected short-falls don’t tell half the story. Unlike corporate pension plans, states can use their projected asset returns to discount their liabilities. A higher expected return yields a higher discount rate. This means a smaller projected liability. The average disocunt rate states use is about 8%. This is absurd. Liabilities should be discounted at the rate which reflects their chance of default. Pension benefits are guaranteed by the constitution in many states. This means even as states declare bankruptcy, and default on their municipal debt, tax payers must still meet pension obligations. This suggests the risk-free rate is the appropriate discount rate. When this rate is used, un-funded pension liabilities total more than three times the size of all outstanding municipal debt!

3. The de-leveraging story - Nomura economist Richard Koo is the guy who made the comparisons between America and Japan and talked about a 'Balance Sheet recession'. Here's Ed Harrison's reporting from Credit Writedowns and an interesting chart courtesy of Mish HT Andrew Wilson via email 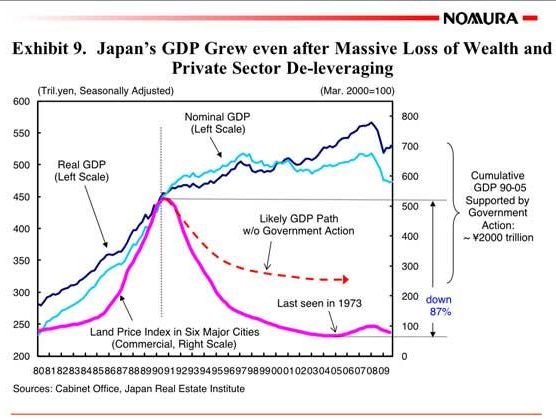 "To those of us in Japan this looks like a replay of what we went through 10 or 15 years ago," Koo says in the video below, which I reckon is a must view.

Nomura’s Chief Economist Richard Koo wrote a book last year called “The Holy Grail of Macroeconomics” which introduced the concept of a balance sheet recession, which explains economic behaviour in the United States during the Great Depression and Japan during its Lost Decade. He explains the factor connecting those two episodes was a consistent desire of economic agents (in this case, businesses) to reduce debt even in the face of massive monetary accommodation. When debt levels are enormous, as they are right now in the United States, an economic downturn becomes existential for a great many forcing people to reduce debt. Recession lowers asset prices (think houses and shares) while the debt used to buy those assets remains. Because the debt levels are so high, suddenly everyone is over-indebted. Many are technically insolvent, their assets now worth less than their debts. And the three D’s come into play: a downturn leads to debt deflation, deleveraging, and ultimately depression. The D-Process is what truly separates depression from recession and why I have said we are living through a depression with a small ‘d’ right now.

4. Tower of debt - CLSA Strategist Russell Napier makes a persuasive case in an FT opinion piece that a Tower of Debt will force a roll back of the free markets. HT Andrew Wilson.

The simple truth is that it is too late for the free markets. The roll back of the free market has already begun, driven by the necessity to support a fragile teetering tower of public debt. Commercial banks' new capital adequacy ratios already require banks to hold higher levels of government debt. In due course a transaction tax on financial instruments, apart from government debt, will come to pass. A 'Buffett' tax which makes short termism expensive and forces owners to engage with managers will come to be seen as the natural solution to produce markets which 'serve our society.' The ultimate weapon to force private savings to fund governments will be capital controls. To support public debt to GDP levels not seen since the second world war, we are likely to see a return to similar forms of market constraints which were necessary in that era. The 'new normal' is not sub par economic growth. The new normal is the roll back of the free markets.

5. Naked Capitalism - Yves Smith from the blog Naked Capitalism talks about the real issues behind the Greek crisis and why it will really struggle. She points out the Greek budget cuts are bigger than the ones that Argentina had to do and just how opposed the Germans are. 6. Vancouver madness - This site collates anecdotes from the Vancouver Real Estate Market. It is a real eye opener. It is just madness there at the moment as the average price just went over C$1 million thanks to Chinese demand and post-Olympics euphoria.

7. Chinese money - Speaking of cheap, easy money pushing up asset prices, real estate agents in Australia are reporting that Chinese investment in farms has increased 10-fold in the last 6 months. It seems cotton and beef farms are popular, Bloomberg reports. This of course is all about easy Chinese credit spilling out of a market where prices have already doubled and looking for 'cheap' opportunities elsewhere. Canada, Australia and New Zealand seem to be first stop when the Chinese real estate money leaves.

“They are interested in large scale cattle farms, they are cashed up and see a financial opportunity here in a secure investment environment,” said Geoff Hickson, real estate manager at Landmark Operations Ltd. “There has been a big increase from Chinese buyers in the past six months, it has grown 10-fold.” Companies like Landmark now use Mandarin translators, said Hickson, who last week showed Chinese potential buyers a 1,000- acre (405-hectare) cattle ranch near Mackay, in Queensland state. The interest in farms mirrors a trend in China’s demand for minerals that helped the Australian economy avoid recession during the global financial crisis.

8. 'Looting Main Street'  - I've been slow to pick up on this latest missive from Matt 'Vampire Squid' Taibbi at Rolling Stone. He has written a bunch of incendiary pieces lately attacking the banks, primarily Goldman Sachs, for ripping off taxpayers. Here he targets the area of municipal bonds and the problems in Jefferson County in Alabama, where dodgy bond issues have forced mass layoffs and cuts to public services.

The sewer bill, in fact, is what cost Pack and her co-workers their jobs. In 1996, the average monthly sewer bill for a family of four in Birmingham was only $14.71 — but that was before the county decided to build an elaborate new sewer system with the help of out-of-state financial wizards with names like Bear Stearns, Lehman Brothers, Goldman Sachs and JP Morgan Chase. The result was a monstrous pile of borrowed money that the county used to build, in essence, the world's grandest toilet — "the Taj Mahal of sewer-treatment plants" is how one county worker put it. What happened here in Jefferson County would turn out to be the perfect metaphor for the peculiar alchemy of modern oligarchical capitalism: A mob of corrupt local officials and morally absent financiers got together to build a giant device that converted human shit into billions of dollars of profit for Wall Street — and misery for people like Lisa Pack.

10. Totally irrelevant video - A motorbike rider with way too much time on his hand.
Top 10 at 10News links