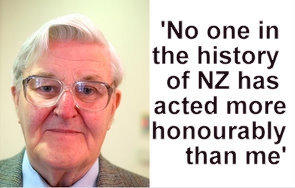 <p>Allan Hubbard has attacked the government's decision to put him into statutory management, saying no one in New Zealand has ever acted more honourably than him.</p>

The government announced on Sunday it had put Aorangi Securities, seven charitable trusts and both Allan Hubbard and Margaret Hubbard into statutory management.

This came after the Companies Office referred a number of matters relating to Aorangi Securities for investigation by the Serious Fraud Office for potential breaches of the Crimes Act. The investigation follows a complaint by an Aorangi investor who had not received a prospectus.

The Companies Office found that NZ$98 million in funds lent to Aorangi by 407 Otago and Canterbury investors had been lent on either directly or indirectly to trusts and interests associated with the Hubbards, contrary to instructions that they be lent as first mortgages secured by property.

Meanwhile, South Canterbury Finance Chief Executive Sandy Maier told interest.co.nz the announcement on Sunday was a surprise, but that South Canterbury did not have any exposure to the entities put into statutory management and it was business as usual for the Timaru-based finance company.

Hubbard resigned from the chairman's role and the board completely several weeks ago and had been trying to sell some or all of his stake in South Canterbury to another player with the ability to inject significant new capital, Maier said. Hubbard retains the role of President for Life at South Canterbury, but did not attend any of the investor roadshows held last week.

The statutory manager would now be in control of Hubbard's stake in South Canterbury and be looking to maximise its value, just as Hubbard was trying to to do, Maier said.

He said Hubbard had not been involved in the business on a day to day basis for weeks and investors were aware that Hubbard's personal interests were separate from South Canterbury Finance, where over 30,000 investors have over NZ$1.2 billion invested.

Maier cautioned against jumping to conclusions too early.

"There's going to be a degree of shock and disbelief and we should all be careful not to rush to judgement," Maier said.

Power also issued a media fact sheet on Aorangi Securities that said Aorangi was a company incorporated in 1974 by Hubbard and his wife Margaret that had lent NZ$134 million from deposits of NZ$98 million from 407 investors in Canterbury and Otago.

The Securities Commission received a complaint from an investor on February 28 this year who said he had not received an investment statement or prospectus.

"Aorangi appears to have originally been a nominee company or contributory mortgage company but seems to have since transformed into a finance company, raising funds from investors and on-lending those funds to borrowers," the fact sheet said.

It included a diagram showing how some of the funds had been lent on an unsecured basis to Allan Hubbard and Margaret Hubbard and then put in investments in their own right or through related entities such as the charitable trusts.

"Many of the loans made by Aorangi are inadequately documented by way of term loan contracts or loan agreements, appear to be unsecured either by way of a registered mortgage over property or a General Security Agreement over the assets of a company, appear to be made contrary to instructions given by investors that their deposits be lent under the security of a first registered mortgage."

Allan Hubbard released a statement through the Timaru Herald early on Monday morning attacking the government's actions as misguided. The full statement is reproduced below.

"I am sorry that this action was taken by a government offical with little consultation with myself and can only conclude that the government official has been misguided in his action," Hubbard said.

"I don't believe in the history of New Zealand that any person has acted more honourably than myself," he said.

Meanwhile a investor in Aorangi Securities from Waimate in South Canterbury told Interest.co.nz he had invested NZ$200,000 in Aorangi and had never seen a prospectus. The investor, who declined to be identified, expected the investments were secured as he had delegated the oversight of the investment to his accountants at Hubbard Churcher in Waimate.

"I was told it was in a trust fund," the investor said. The funds were initially paying 9%, but the interest rate had been reduced recently to 8%. He was being paid quarterly and expected the next payment after June 30.

When asked about his initial reaction to the news of the SFO investigation and the statutory management decision, the investor said: "I thought heck!. The dirt's hit the fan now."

"If he goes down then jeepers, it will be a big financial blow to everyone around here," he said.

Here is the full statement below from Power.

"My action follows a recommendation from the Securities Commission, and I advised a meeting of the Acting Prime Minister and senior Cabinet Ministers of my decision at 2pm today," Mr Power said. "The Registrar of Companies has referred a number of matters relating to Aorangi Securities Ltd to the Serious Fraud Office to investigate potential breaches of the Crimes Act

"The recommendation of statutory management was the result of careful consideration by the Securities Commission.

"The decision to place these entities under statutory management is being taken pursuant to section 38 of the Corporations (Investigation and Management) Act 1989, and is effective from 3.30pm today. "It follows a process that took a number of weeks and involved the Companies Office and Mr Hubbard. "The main objectives are to prevent fraud and reckless company management, to protect investors and to enable the orderly administration of a company's affairs.

"The Commission considered other remedies. "But given the circumstances of this case, that Mr and Mrs Hubbard are involved in the affairs of the entities as depositors, managers, and borrowers, and that loans to related parties have not been properly secured and documented, it was felt statutory management was the only option.

"The Commission was satisfied on reasonable grounds that Mr and Mrs Hubbard are so closely connected with the business and affairs of the entities that the statutory managers would be unable to effectively exercise the powers conferred by the Corporations (Investigation and Management) Act 1989 unless they are also declared subject to statutory management."

The Government has appointed Trevor Thornton and Richard Simpson of Grant Thornton as statutory managers.

Here is the full statement below from Allan Hubbard through the Timaru Herald.

"I am writing to you following recent action by a Government department.

"I have operated Aorangi Security as a mortgage company for over 30 years and during that entire period interest has been paid quarterly and the clients have suffered no loss of capital and have a prompt return of capital. "The current position of Aoarangi is approximately as follows:

"Client deposits $88 million which means a surplus of $40 million.

"The $40 million surplus belongs to myself and family and all our equity has been subordinated to client interest, ie, the Hubbard family stands any loss before clients do.

"The Crown seems to believe that your capital is at risk under my management and have appointed a statutory manager whose job is to realise all the loans and repay you your capital. This will take time as it is not possible for borrowers to repay loans at short notice.

"There are sufficient funds on hand to pay interest due at June 30.

"If for any reason you do not receive your capital back in full and provided it is within my resources I will meet any shortfall. "I extend my personal apology for what has happened.

"As you will have read in the media in February last I introduced $150 million of assets into South Canterbury Finance to ensure that there was an equity for preference shareholders and that they suffered no loss.

"I don't believe in the history of New Zealand that any person has acted more honourably than myself."

A quick caution to everyone before comparing this case with others here or overseas.

We don't know what has gone on here. Best not to speculate until we have seen what the SFO finds

FYI to all I have updated the story with Allan Hubbard's statement, which is reproduced in full above the comments.

FYI to all I have updated again with S&P considering their response and comments from an unnamed Aorangi investor.

A quick warning to all on this and other threads.

Any comparison of anyone or any company or any government with Nazi Germany will automatically be deleted for obvious reasons.

Let's be forceful and detailed in our comments, but not stoop to talk-back radio levels people.