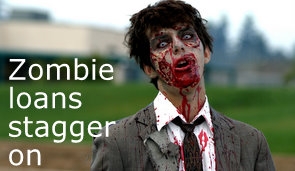 <p> Zombie loans held by finance companies are staggering on as banks are others are reluctant to pull the trigger and crystallize big losses.</p>

The finance company sector has a "legacy of problem loans" that are proving difficult to dispose of or recover despite improvements in profitability, margins and volume growth this year.

These observations are made in KPMG's Financial Institutions Performance Survey - Non-banks Review of 2010.

KPMG points out that four companies, which combined represent 39% of the total finance company sector's assets - the now in receivership Equitable Mortgages, Marac Finance, PGG Wrightson Finance and UDC Finance, reported an NZ$111 million annual increase in impaired loans. This essentially doubles the level of such loans from last year.

"While the four companies operate in somewhat different segments of the industry, including automotive and equipment financing, property funding, rural exposures and general asset financing, the trend across these four companies points to a legacy of problem loans which are proving difficult to dispose of or recover," KPMG says.

Across the sector average past due assets are up NZ$42 million, or 23%, from last year to NZ$223 million and gross impaired assets are up NZ$93 million, or 39.1%, to NZ$329 million. Equitable Mortgages and PGG Wrightson Finance recorded a combined increase in past due assets of NZ$103 million, whilst Marac recorded a reduction of NZ$59 million ahead of its merger with CBS Canterbury and the Southern Cross Building Society.

KPMG says the rising past due assets points to the fact that whilst the recession might technically be over, there are still a "large number" of customers struggling to make payments.

KPMG audit partner John Kensington told interest.co.nz that all banks and finance companies have some loans in their books that, if they all took to the market to sell now, they would take a haircut on the valuations obtained.

"All the banks and finance companies have some loans in their book where they are rather sensibly and patiently working with people to say 'well, if the interest is being covered do we really want to force the issue here and perhaps crystallize a loss?' Because I think there's still a lot of uncertainty in the market," Kensington said.

These "legacy asset quality" issues are likely to persist into the foreseeable future until impaired assets are recovered or written off. Kensington said, depending on the type of loans, banks and finance companies need property or asset valuations to rise, businesses to turn around or more buyers to emerge in the market, if they're to avoid booking losses.

The KPMG survey captures the annual balance dates between October 1, 2009 and September 30, 2010. The number of companies surveyed has almost halved to just 16 from 31 last year following the demise of several more finance companies including Strategic Finance, South Canterbury Finance, Allied Nationwide Finance, St Laurence and North South Finance. KPMG has also doubled the threshold for inclusion in the survey to NZ$100 million of total assets.

All 16 firms profitable; Interest margins rise back to 2000 levels

The companies covered in the survey reported a combined profit after tax of NZ$162 million compared to a loss last year of NZ$143 million. All 16 firms reported a net profit this year compared to last year when seven posted losses.

"One key factor contributing to this positive result is the boost to earnings resulting from a 198 basis point increase in the average interest margin between 2009 and 2010 as funding costs fell but the finance companies were able to hold their interest rates on lending," says KPMG.

KPMG says you need to turn the clock back to 2000 to see an average interest margin for the sector at this year's 5.71% level. The firm says the falling interest rate environment through 2009, combined with a market that has been especially tight on new lending, has allowed the surviving finance companies to "more appropriately" price for risk.

Total assets across the sector fell 5.1%, reflecting a slowing economy and industry that remains cash constrained with funding still tight.

"While many of the companies would have liked to reduce their reliance on the debenture funding model, the banks have shown limited interest in providing funding to the finance company sector," says KPMG.

"Even those that have bank funding have found it comes with certain covenants and restrictions which have made growth difficult."

Operating expenses as compared to operating income dropped to 45.6% from 73% last year.

Strawberries very cheap this time of year. Should have taken off my white shirt and tie though...

so what KPMG and the article is saying is that if push came to shove, these past due loans would actually result in substantial loss? Why such leniency here when exactly the same scenario existed at SCF and others, leading to default and eventual collapse. smacks of a double standard. or are they doing something superior in managing these loans? frankly i doubt it!!

KPMG probably audit all of these companies and should have included any reservations about the fair value of loans in their audit reports.  They are either admitting their incompentence or just headline grabbing - probably both.