Govt on target for NZ$39 mln Rugby World Cup loss, although 200,000 tickets still must be sold. Your view?

Govt on target for NZ$39 mln Rugby World Cup loss, although 200,000 tickets still must be sold. Your view? 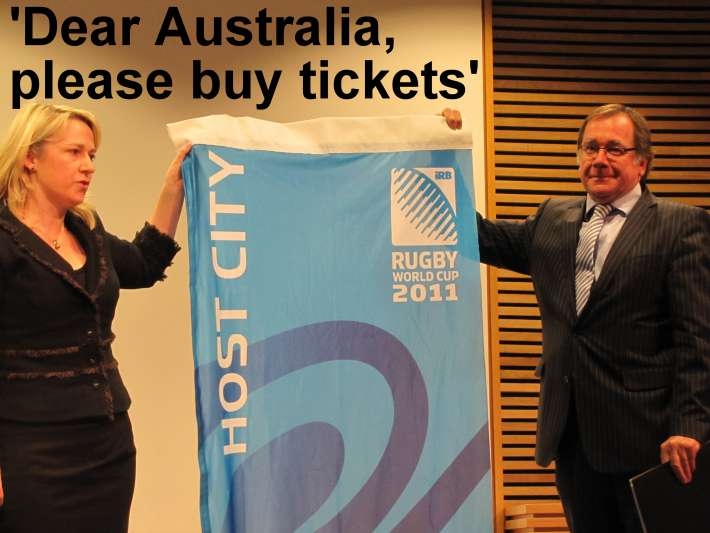 The government is expecting it will meet its forecast for a NZ$39 million loss from the Rugby World Cup as long as it sells a further 200,000 tickets worth NZ$30.5 million by the end of the tournament.

Rugby World Cup Minister Murray McCully and Rugby World Cup 2011 chief operating officer Therese Walsh told media in Parliament today that the extra 200,000 tickets to be sold to meet the target should be snapped up mainly by Australians and New Zealanders, who typically made late decisions to purchase tickets.

The government set a target to make NZ$268.5 million worth of revenue from the tournament, with the full capacity of ticket sales going out by a further NZ$30 million if all matches were to be sell-outs.

Up until now, ticket sales were generally in the order of NZ$1 million every three or four days, meaning sales would have to be ramped up in the final few weeks before the tournament starts on September 9. Walsh said the "run-rate" for sales had begun to increase, and was confident the target would be met.

Rugby World Cup CEO Martin Snedden and McCully are both due in Australia this week in efforts to market the tournament to Trans-Tasman fans.

Many late sales to Australian fans, or expats living in Australia, would hinge on how well their respective teams fare during the tournament, Walsh said.

McCully said the government’s NZ$39 million loss would be mitigated by increased tax receipts and levels of business for New Zealand companies.

See Bernard Hickey's piece arguing the New Zealand government should renegotiate its contract with the IRB following the Christchurch earthquakes.

And to sell all them 200,000 tickets by say the end of September will require an increase in the sales rate of about 2-3 times.

Back in the Cold War era, Romania, Bulgaria, Czechoslovakia and others devoted half of their GNP to sport.

Every four years they used wheelbarrows to haul away their piles of gold medals.

Where did that "investment" get them?

Multinational companies don't set up shop in your economy because some of your citizens are good at sports.

Especially a marginal and minority sport such as rugby, taken seriously by only a handful of nations (none of them rich and influential).

Those countries were inept as they never won the RWC

... what about all those inept countries who never won an Olympic gold medal in rugby ... let's recall the winners : France , the Wallabies , and the USA twice ...

Huh !...all those other rugby nations must be really useless to lose out to that little lot !

But who is going to make the World Cup squad?

All that government money spent but still no real replacement for Richie McCaw in the squad announced this afternoon.

2011 All Blacks who have missed selection include wings Hosea Gear, Sitiveni Sivivatu and Ben Smith, loose forward Liam Messam, prop Wyatt Crockett and lock Jarrad Hoeata. Henry said they would be included in a pool of back–up players to cover for any injuries during the tournament.

I think we need to clone Richie...And Dan Carter.

But where else can all NZ's vast number of closet-dwellers get their fix of rugby-themed homoerotica? Think of all those super buff young guys in tight little shorts sticking their heads between each other's legs, or writhing around with each other in the mud..... The RWC is every gay's wetdream come true.

In that note why don't we host AFL, they wear even tighter short and small singlet...

We didnt need that thought!

I dont want to be cynical but does the NZ Rugby Board not know there is a recession ?

Tickets at $160 a pop , thats equivalent to nearly two days wages for a youngster earning the minimum wage after tax .

Consider the opportunity cost of NZ$160 : a weeks groceries forr a famility of four , two tanks of petrol, etc, etc, all they get is 90 minutes entertainement. A bit pricey if you ask me .

Little wonder Kiwis  are choosing to watch the games on a the big screen in a pub or at home .

Perhaps the rugby short they are wearing is too tight therefore not enough oxygen to the brain !!!

You could be right and they are propably manufactrued in China too.

Damn right  Boatman, we are going to open our Rugby clubs up..go down have a few beers watch the rugby on the big screen ...waste of money paying some of those prices...although us Cantabs miss out anyway..but I can take the kids to a NPC match for $5 for a live game..and I would rather feed my money back into our local club ....rather than the IRB

$160 will seem like a pittance in a few years time once Greece defaults and world inflation takes hold - may as well spend it on a good cause!

Why are politicians blowing taxpayers money on parties and frippery? Time to get real.Look at Greece and Ireland among others.

$39m is small beer inthe scheme of things. Melbourne pays $50m extra for one day of Formula 1. We get a whole month. The GST alone from the visitors probably pays off the $39m so its worth it. Aussies know that to make money you have to invest money.

Anyone know when FIFA are bringing the world cup here? That might put us on the radar and pull in a few tourists. Doubt they'd be many unsold tickets lying around either...

The drawback there is that you need $39m to secure the votes before you start! Aussie spent more than that on their application, as did the UK. Can't beat petrodollars.

What a load of whingers. Enjoy the rugger, bugger the cost and have a few gummy lollies. $39M is chicken feed in the scheme of things. If this still grinds with you blame Helen 'pissed off to USA' Clark for getting us this event.

BTW, go the All Blacks, or do all the Labour voters here hope the ABs fails o it will derail Nationals election chances........

No , not enough whingers in my opinion ... would like to see Sitivini Sitivani & Joe Rockococococo in the team ... nevertheless , a good balance to the squad .

Was Brendan Leonard injured , how else do they keep picking Andy Ellis ?

Pity they can't snaffle Nick Evans from Europe , as Dan Carter's back up .