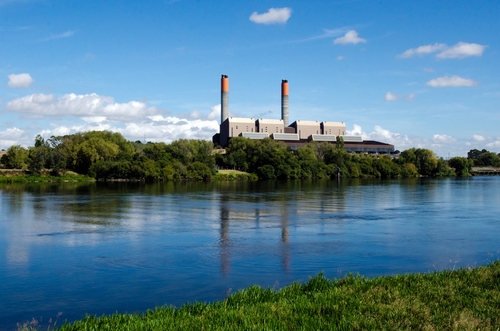 Closure of the Tiwai Point aluminium smelter would cause "significant disruption" to New Zealand's electricity industry but this could be resolved by the shutdown of  thermal power stations, Goldman Sachs analysts believe.

The smelter currently uses about 13% of the country's power. Talks over pricing of this power between the supplier, SOE Meridian Energy and the Rio Tinto-controlled company that owns the smelter have been deadlocked. A Government effort to "bridge the gap" with a short-term price subsidy was knocked back.

Goldman sachs analysts Matthew Henry and Anthony Cheong say in a research paper that there is a "real and material possibility" the smelter will close. This would have a "material influence" on the country's electricity industry.

"We believe the resulting disruption and uncertainty from a [smelter] closure would, at least initially, add downside risk to the NZ electricity sector, and we would expect a higher risk risk premium to be factored into share prices as a result, at least in the short term," they say.

"In our view a post [smelter] closure electricity market would not form a stable equilibrium.

"We expect the resulting potential for a material decline in prices would likely compel thermal plant closures."

There would be "no ambiguity" on which plant would close, with the remaining coal-fired units of the Huntly Power station owned by another SOE Genesis Energy likely to come under the greatest pricing pressure if the smelter closes.

The analysts say they view a contract between Meridian and Genesis, effectively replacing Huntly with Meridian's excess generation capacity "as a rational (and likely earnings accretive) outcome for both parties".

But additionally, Henry and Cheong believe that in a smelter-closure scenario NZX-listed Contact Energy (which was formerly an SOE) would be likely to close on of its gas-fired plants, probably the 400MW Otahuhu B plant, which the company has already flagged for potential conversion or closure.

The analysts say that such closures could "broadly offset" the impact on supply from the closure of Tiwai Point.

Goldman Sachs is one of the joint lead managers on the Mighty River Power share float, which was launched last Friday.

In any truly competitive market, if 17% of demand disappeared, the price would come down significantly to stimulate demand, and the share price of the companies would come down as a result. But for some reason it is believed that electricity companies share prices are related to the book value of their assets rather than the demand for their product - if that turns out to be true, then it isn't a proper market...

Do anyone really believe we have a market in electricity.  The New Zealander is here to pay through the nose for whatever can be extracted.  Our economy is not run for our benefit.

If Tiwai closes, then 'wise heads' will ensure that prices stay up.   And the serfs stay paying.

Compared to Canada NZ power is not cheap

A UBS research report issued in November 2011, just after Rio put its New Zealand and Australian smelters up for sale as Pacific Aluminium, suggests Tiwai Pt makes metal at around US$1900 per tonne, against US$1700 at Tomago - the lowest cost of the Australian smelters being sold - and US$1400 in Canada.

The problem with closing thermal power stations is that if there is a drought then hydro cannot supply all the demand.

Thermal power is needed in the dry years when the lakes are empty.

Does Goldman Sachs mention this issue?

Thank goodness we have someone to save us from the unmitigated disaster of cheap available electricity.

If closing the Tiwai pt smelter results in surplus power to in effect shelve Merridian/Genesis proposals for massive/expensive windfarms  ..then I say Good Job.By the time we need more generating capacity maybe sanity will prevail and a more efficient replacement for Huntly can be built.Your power bill may not fall but at least it wont rise as fast.

Your onto it Don!

Wind farms are inefficient. The only reason they are implemented is because of public relations. You know, the green clean image and the fact that renewable energy is in vogue!

Near to where I live a wind farm was developed a few years ago. More often than not the wind mills are not spining; they not only spin when in production. Wind mills are sinchronized to the grid's frequency by spining them at the right speed using an electric motor which obviously consumes power, and only when the wind spins the motor faster than the sinchronous frequency is power fed to the grid. Hence, they are turned off at night and when there is no enough wind to generate power.

Wind turbines are a lot of hot air.

Assuming the electricity could be redirected to the North Island - I would then build the world's largest sawmill.  I would build that bad boy right up in the central north island - near the other geothermal plants - and right next to some of the worlds largest plantation forests.  I'd future proof the plant in terms of size, throughput, and capability.  Then I'd redirect all the logs that are being exported for $100 a cube (or say 115 now) to higher value products that sell in the range of 400-1000 (the upper being the price of say LVL).

Forestry is already the pumping force in the NZ economy - but log exports is a bit of a waste.  Even the Russians agrree - with their massive internal tarrifs.

Am I missing something here...? Why would it be a problem if prices of electricity dropped?

Or perhaps the question should be:

For whom would it be a problem if wholesale electricity prices drop?

Wake up Kiwis, we are being ripped off!