Statistics New Zealand has redeveloped the Household Labour Force Survey (HLFS), the official source of data on employment and unemployment.

The revisions bring New Zealand data into line with the latest international standards (although not all statistical agencies have adopted these standards, notably the European Union).

The June quarter 2016 data release on 17 August will incorporate these changes.

This special topic briefly summarises some of the key changes. It then looks at the implications of the revised data for the labour market and economic outlook, including what this means for the Budget Update forecasts. It concludes with a brief look at the new underutilisation measure.

Changes to the HLFS methodology

Statistics New Zealand have produced a number of papers summarising the changes to the HLFS methodology, including the revised data series.1 A key change in the HLFS methodology is to the definition of unemployment. Internet job search has been reclassified from active to passive job search, and thus does not meet the twin criteria for being unemployed – actively seeking and available for work. Consequently the number of unemployed and the unemployment rate has been revised lower.

There are also revisions to other series including usual hours worked, which changes the split between full-time and part-time workers. The redevelopment also introduces underutilisation as an official measure. Underutilisation will comprise those people who are unemployed, underemployed (i.e. would like to work more hours if the work was available) and the potential labour force (those available to work but not actively looking and those actively looking but not available to work).

• The number of unemployed is lower by around 12,000 per quarter on average. 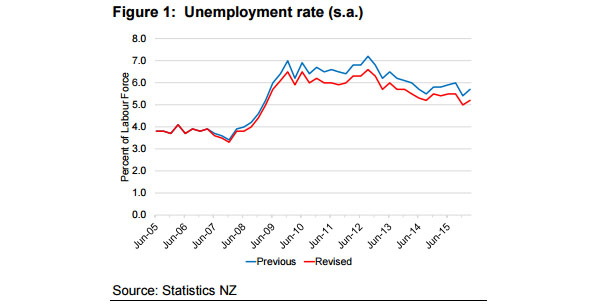 • The number of people employed and the employment rate have not changed. 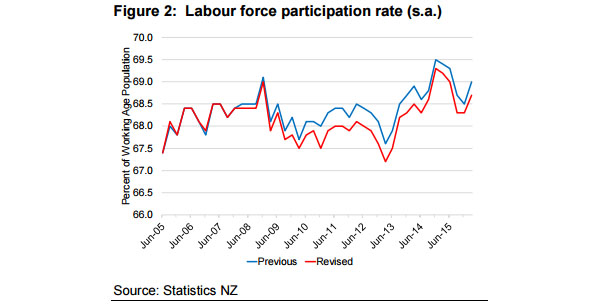 • Total usual hours worked increases around 4.4%, as there are now more full-time workers and fewer part-time workers. This is largely a technical change due to different imputation techniques for non-responses (Figure 3). 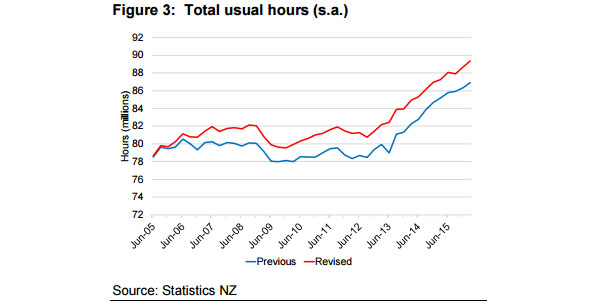 Implications for the labour market outlook

The methodological changes are a recalibration of some of the key measures of the survey and result in shifts in the levels of those measures over time. Applying the average reduction over the past few years to the Treasury Budget Update forecast results in the unemployment rate increasing to around 5.2% over 2016 (previously it peaked at 5.7%) and then falling below 5.0% in late 2017 (Figure 4). 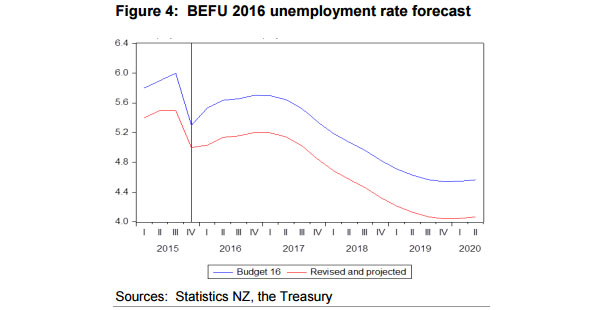 As discussed in recent Monthly Economic Indicator reports, data since the Budget Update forecasts were finalised point to a slightly more positive economic outlook in the near term. This may lead to a slightly slower increase in the unemployment rate in the near term than previously expected. That said, heightened global volatility in the wake of the Brexit vote and other international developments are a potential source of risk to the economic and labour market outlook.

Implications for the economic outlook

Some commentators might suggest that there is now less spare capacity in the labour market than previously thought, which would imply greater inflationary pressure. Conversely, the downward revision to unemployment adds to the puzzling lack of inflationary pressure evident in an economy that is operating closer to full capacity than previously thought.

Treasury takes the view that the unemployment rate consistent with full employment (the nonaccelerating inflation rate of unemployment or NAIRU) has also fallen over time, so that, as in Figure 4 above, it would be closer to 4.0% than our Budget Update estimate of 4.5%. Our view is that while the data definition and published data have changed, people’s behaviour has not.

Measures of economic output (GDP), the capital stock and the rate of inflation have not changed, suggesting that estimates of potential output and the output gap are unchanged. That is, our estimates of spare capacity are unlikely to change and thus these data do not have implications for the inflation outlook or monetary policy.

Underutilisation of the labour force

Figure 5 indicates that while unemployment has been falling steadily from its post-GFC peak, underutilisation remains close to its post-GFC peak. This divergence may reflect broader changes in the way people move between partand full-time employment and in and out of the labour force, and may partly account for relatively low wage inflation in recent years. Treasury will assess the potential implications of the underutilisation rate further once the data becomes available.