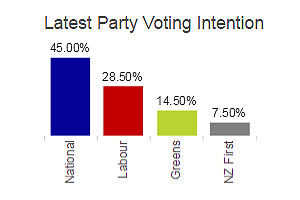 If a New Zealand Election was held now the latest New Zealand Roy Morgan Poll shows it would be a very close result.

“New Zealand ends 2016 with a new Prime Minister after former Finance Minister Bill English stepped into the top job following the shock resignation of John Key early in December, and New Zealanders can now look forward to a competitive election later in 2017.

“Key’s leadership had seemed to assure National of winning a fourth term next year. However, today’s Morgan Poll shows support for National down 4.5% to 45% now just ahead of a potential Labour/ Greens alliance 43% (up 5.5%). If these results are repeated at the election it will be NZ First – 7.5% (down 0.5%) that will get to determine who forms New Zealand’s next Government.

“Looking towards next year’s election the latest Roy Morgan New Zealand Issues research shows the issue of Housing – including Housing affordability/ Housing prices/ Homelessness/ Homeless is now the biggest problem facing New Zealand according to respondents - mentioned by 27% of New Zealanders in October. This problem is particularly acute in New Zealand’s largest city of Auckland – mentioned by 37% of respondents.

“If new PM Bill English is to successfully contest next year’s New Zealand election and win a fourth term for the National Government he will need to come up with new policies in the area of Housing to convince New Zealand electors he deserves his own mandate as Prime Minister.”

Electors were asked: “If a New Zealand Election were held today which party would receive your party vote?” This latest New Zealand Roy Morgan Poll on voting intention was conducted by telephone – both landline and mobile telephone, with a NZ wide cross-section of 872 electors between November 28-December 11, 2016. Of all electors surveyed 5.5% (down 1%) didn’t name a party.

The original report is here.

JK didn't resign until midway through this polling period on 5 December. Assuming half the polling was done prior to his resignation, this suggests that voting intentions for National post his resignation have fallen through the floor.

The tide was not turning , there is simply no alternative in the Greenlabour Party.

They are a ragtag bunch of left-wing rabble - rousing psuedo- academics and failed trade-unionists , pandering to fringe interests , who have never done a proper day's work in their lives .

Immigration and housing Boatman. Big fail on both. They've dug a bloody big hole....so big the main man has done a runner before he falls in.

I'm 26. They will never get my vote ever again

I have many years on you Nissan ..... but am ashamed of the greedy generation to which I belong. A dream run they have had and they remain intent on sucking the lifeblood not only out of the environment but out of our young people to.

Boatman I think you'll find the pseudo science believers are the nats, they don't even seem to be sure if global warming is for real or not yet.

Careful now. Winnie is just as likely to get under the sheets with a ragged Nat bunch as he is to negotiate a deal with another grouping.
I too would consider NZF if I could trust the eventual outcome would avoid the Nats. The Nats never change. They are only ever interested in holding onto power at the detriment of New Zealand.

Not really too sure about that, he has been extremely critical of the nats in the last few years, on a very regular basis.

Just like Americans took a risk on Trump, I am wiling to take a "risk" with NZ First. They're the only ones mentioning the hard topics.

Lets not get carried away here .

Firstly , we know from the US elections, Brexit , and as Winston Peters will tell you , Polls are not reliable .

Baby boomers like me don't do polls, so you don't know what we are thinking . I have never responded to a voting poll , ever, and I have lived in 3 countries in which I was entitled to vote , and voted for the first time in the 1970's .

Then you need to understand that anyone voting for a party that proposes paying more taxes , new taxes , or a new levy , is like a turkey voting for an early Christmas.

Labour does not have any policy , other than more taxes , its just ridiculous seeing Grant Robertson proposing a new tax on small building contractors struggling to build enough houses ............ is the man insane?

Kiwis dont like new taxes , so they wont vote for such nonsense .

Laslty , God help us if the Communist -leaning Greenlabour bunch ever get into power, they are a threat to our way of life .

Without doing a Poll survey , I am happy to advise that I intend to vote for Gareth Morgan's new party because he is proposing a move away from the same-old-same-old -usual -suspects nonsense

Polls now are not the best measure in todays on line world.
brexit and trump were not picked to win by polls but on social media it was the opposite, it seems
people are more willing to say where they stand online than over a phone.
and for that reason I think WP will be king maker
https://techcrunch.com/2016/11/10/social-media-did-a-better-job-at-predi...

I think you're still up there on planet key boatman. You don't seem very observant, we had Labor and the greens in for 9 years, and it was one of our most economically successful in NZ history, 9 budget surpluses in a row, billions in debt paid off, billions of money saved for retires over that time with Kiwisaver introduced, incomes increased at good levels etc.
We could compare that to the last 8 years of nats, record equaling deficits in a row, record accumulating of public debt, while at the same record tax cuts for the most wealthy, record redistribution of wealth from the middle class and poor to the rich, record imbalance of house prices to wages, very low increases in wages, record fake growth through immigration, and doing nothing about foreign house buyers.
A waste of 8 years for everyone but the rich.

wait for it.......... GFC earthquakes etc etc, there are always excuses for borrowing,
I would have loved as a hypothetical exercise reverse the time each was in power to see which handled the books better.
I have lived through many many cycles of national and every time they have left the country worse off than when they start so when people say they are better financial managers I scoff.
examples
muldon scrapping saved super scheme and funding out of consolidated account,
RR black budget decimated our rural areas
this government borrowing 100 billion but infrastructure lagging

in saying that labour are not much better
Examples WFF, interest free student loans, selling assets 100%, buying back kiwirail, airnz for way too much

The more interesting poll will the next one in the New Year - this poll is only really half an answer....

The pendulum has swung. It's all down hill from here. JK may have been hopeless, but apparently not stupid.

I disagree , Key did a really good job on any measure .

We have the lowest interest rates and highest levels of employment of our generation , positive and solid GDP growth , a booming economy , the biggest inflation-adjusted increase in the minimum wage in years and a budget surplus, along with a massive cut in income tax in 2009 ....... exactly what more could we ask for ?

The high employment comes via low skill/ low wage jobs, GDP growth per capita is crap, to say the least, anyone can create a "booming" economy by encouraging way too much immigration, again per capita growth is crap because of it. Gee whizz, increase in minimum wage but to offset that, all gone plus some in the cost of housing oneself.
We could ask for all the settings to be changed so that the huge inequalities that have arisen from current ones could be reversed (would have been much better had they not been allowed to in the first place, mind). There you go, is that better with the blinders off?

$3 /hour for welders and all legal. What more could we ask for? Perhaps to treat people with a first world dignity rather than running a third world sweatshop. Just another wonderful legacy of the golden boy money trader.

Not really too different, is it?

Are you legally even allowed to hold someone's passport?

We could ask people to actually understand the mechanics of the things you mention. Then we wouldn't have the likes of the rhetoric you ramble on with above.

We have the lowest interest rates and highest levels of employment of our generation - How is that the result of JK's actions, seeing as they are primarily a function of monetary policy and reworking of the measure definition (in this case)...?
Economists would argue that indeed high interest rates are the sign of a truly well performing economy..

Positive and Solid GDP growth - what does that mean in real terms? it doesn't mean that the country is getting wealthier when you control for population..Plus, everyone knows that the best thing for GDP is a natural disaster. JK was lucky enough to have CHC happen on his watch and now the Kaikoura one.

Biggest real increases to the minimum wage - Not difficult when headline inflation is so low.

A budget surplus - Doesn't look so rosy when it is at the expense of investment in public goods that are strained due to the huge level of unskilled immigration.

not again Bill, no no, not again

Why has WP's popularity gone down? Shouldn't he be going up at the expense of National?

feels like we are in for a change of govt based on frustration with its inability to deal with housing or immigration.bill english could be sleepwalking to defeat like last time.

Poll or no poll. Ground reality is that National is going. Only thing unsure is the margin of their defeat.

This is last year of Fame for Bill English. After next election with two defeats will be retiring from politics.

The fact that Nationals popularity has dropped 5% tells a story that the public generally thought JK was a good PM...although I know most on here disagree!!

JK or no JK nothing will save national government.

Only JK was smart and could forsee but ego prevented from mending the policy instead decided to go and leave the mess for others to clear.

As Winnie called him - Spray and walk away

I don't vote National - never have and probably never will - but 45% is about where they sit regarding the past 3 or 4 elections. If we look closely at the previous elections, it has always been close; a few percentage points can change things. However, I am willing to place a bet now that Bill English will form the next government. The question will be with who? Probably NZ First or perhaps TOP. Labour and the Greens won't be able to form a government - at the moment they could organise a piss-up in a brewery.