Infrastructure investment rises with just over half allocated to roading and over three quarters in the North Island. Much of it is front-loaded

Infrastructure investment rises with just over half allocated to roading and over three quarters in the North Island. Much of it is front-loaded
26th Sep 18, 11:39am
by Guest 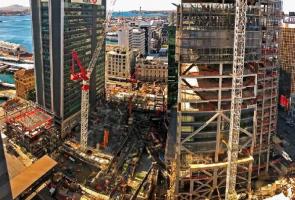 The latest Infometrics Infrastructure Pipeline Profile shows that average infrastructure investment across the country is expected to be 28% higher over the next 10 years compared to the 2010-2018 period.

Higher population growth over recent years and sustained underinvestment in infrastructure have resulted in many infrastructure assets across the country reaching the end of their usable lives. These assets are in need of replacement or upgrades to continue to provide the required level of service to the public.

Looking at spending at a regional level, the North Island is set to receive 77% of the national infrastructure spend over the next ten years, with around $100b in funding expected. The South Island receives the balance of $29b over the period.

This funding profile exactly matches New Zealand’s projected population split in 2028. Over the next ten years, the proportion of New Zealanders living in the North Island is expected to marginally increase from 76.5% in 2018 to 77.2% in 2028.

This refresh of our Infrastructure Pipeline Profile is the biggest update in three years, as a result of new data out to 2028. The Profile builds on data from local councils in their Long-Term Plans and the recent Government Policy Statement on Land Transport. This data extends the coverage of the Profile out by three years, from 2025 to 2028.

Planned infrastructure spending during the seven-year cross over period 2019-2025 is 26% higher in the new update compared to the previous iteration of the Profile. The latest update to the Profile sets infrastructure spending over the 2019-2025 period at $93b, compared to $74b in the previous version of the Profile. The increased funding expected over the next seven years appears to be part of a broader response to invest greater amounts, more quickly, in response to strong population growth and to address concerns about an infrastructure deficit.

Brad Olsen is an economist at Infometrics. This story is a re-post from the original here. It is re-posted with permission.

They are claiming 28% increase vs previous period. NZ population growing at 1-2% in recent times means you would need to bump it by 10-20% just to maintain constant spend per person.

Also appears they are comparing a 10 year future projected spend against spend in last 9 years. A little bit dishonest isn't it? 10% bump right there. Also we generally have around 2% inflation so over 10 years that is roughly 20%. Call it 30% increase that we would hope to see to keep funding constant in real terms?

So it looks like they are reducing infrastructure spend per head to significantly below current levels.

I'm not suprised, we've irresponsibly allowed an enormous amount of people into the country longterm so per capita even at WW2 scale spending would go backwards. My disappointment is there is no breakout for rail expansion, passenger or freight focussed which shows how outdated this country really is when it comes to a modern approach to transport.

It seems it costs a lot of money to block our busiest roads with cycle lanes.