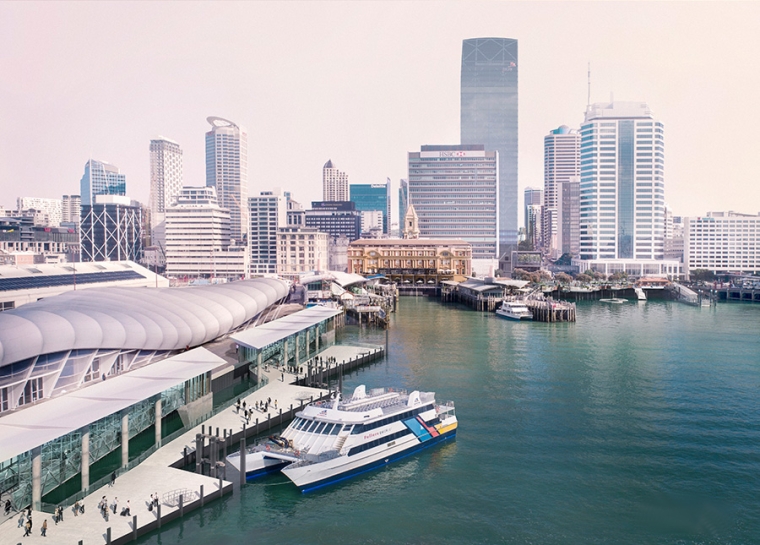 The redevelopment of Auckland’s Downtown Ferry Terminal by Auckland Transport (AT) is facing a cost blow-out and questions over the quality of the project’s business case.

When the Auckland Council announced the upgrade in September 2017 it said it would cost $55 million dollars. But AT, which is leading the project, now says the projected cost of the redevelopment has increased to $74 million.

The project will see the creation of six new berths on the west side of Queens Wharf which Auckland Transport (AT) says is “the first step towards a modern, consolidated ferry terminal for Auckland”.

AT is planning to apply to the New Zealand Transport Agency (NZTA) for funding for the project, but the government agency has now raised concerns about the redevelopment’s business case.

The issue was outlined in the agenda for the AT Board Meeting on February 12 which states:

“Work continues on completing the NZTA Business Case for funding. It is noted that feedback from NZTA on the overall programme strategic business case and the Ferry Basin business case indicates some challenges with the economics and benefits. These concerns are being worked through.”

The report says the proposed design is currently being assessed “to ensure that design requirements are being met and that the proposed works are within budget”.

“We need to find the balance between cost and benefit to provide the best value for money. We are carrying out an engineering exercise and looking closely at options to reduce the cost of the project without unduly reducing the customer experience.”

Hannan says the project is currently in the design and planning stages and a resource consent hearing for the redevelopment is scheduled for the end of March. Construction is expected to start in mid-2019 to late 2020.

The ferry terminal upgrade is part of the wider Downtown Programme, a collaboration between AT, Auckland Council and Panuku Development Auckland (Panuku).

In addition to the ferry terminal redevelopment it also includes the upgrade of Quay Street, a new proposed Downtown Public Space, a proposed Mooring Dolphin at the end of Queens Wharf and a new Downtown Transport Hub.

A spokesperson for the NZTA confirms it has been in talks with AT about its business case for the Downtown Ferry Terminal redevelopment and the wider Downtown Programme, but it hasn’t yet received a formal funding application. In a prepared statement the NZTA states:

“NZTA requires that funding applications are supported by a business case that has followed the correct pathways using the Business Case Approach and provides a level of information for NZTA to make robust investment decisions. NZTA has been reviewing the draft AT business case and providing feedback.”

The facilities are used to provide ferry services to Devonport, Stanley Bay, Bayswater, Birkenhead, Half Moon Bay, Waiheke and Gulf Harbour, Hobsonville, West Harbour, Pine Harbour and Rakino Island. While a number of charter and tourist operators also use the births at the ferry terminal.

When the Auckland Council announced the revamp of downtown ferry basin last year it said the plans included removing the existing piers one and two which are used by ferries departing for Waiheke and Devonport and replacing them with a new pier and terminal buildings on Queens Wharf.

At the time the Auckland Council said funding for the ferry basin redevelopment hadn’t yet been allocated, but it would be considered as part of its 10 year budget plan which would be finalised in late 2018.

In a report prepared for AT by the project’s designers Tonkin and Taylor last year they said the growing demand for services was the behind the need for the new facilities.

“Recent AT ferry growth predictions have indicated that existing infrastructure will only have enough capacity to accommodate growth in services and patronage through to 2022/23, at which point additional berths will be required to accommodate predicted growth. This number of berths cannot be accommodated within the current footprint of the Downtown Ferry Terminal, and the existing infrastructure is unlikely to meet requirements of future ferry operations. Further to this, Piers 1, 2 and 3 are all in need of renewal works to keep them operating over the long term.”

A sub-head suggestion:
'Public servants, unused to the notion that Time = Money, devoid of commercial experience, with guaranteed job security and plush conditions thanks to compulsorily acquired funding, misunderestimate capex by 50%. Unexpectedly.'

Rebates in the form of a box of prezzy cards in their cubby hole as thanks from all the suppliers and contractors who benefit from all the variations and cost blowouts.

It is OK, only a small drop in the Ocean.....a mere bagatelle, a small price to pay, for living in the over blown Capital Expenditure Blowhard that is Awkland Harbour City. Public Servants are renowned for their pre-planning and free disposition. Tis why we have a Perfect Gridlocked World...is it not.

I hope they have planned for Electric Boats and Charging Points for the next Century. Plus paywave on the Terminals so we can all go Cashless, as we will not have any cash left at this rate...to tax. Savers only have so much ...you know...

Or will we be able to put it on the House.

Oh! and we will need scooter docking stations and District Nurses to cater for the New Mode of transport we may have to put up with to get around our Awkward Awkland Roads & Congested pathways. Though I suggest 5 on a Pillion Motor Cycle like our near neighbours, might be Uber APPt. by then. Tain;t just the docking ...stations one has to think about.....when smart thinking and up large spending...plus a tad amount of Interest....naturally. Or are we importing Inflation to cover this.

It all adds up......Public Servants....wasting ....and frittering our lives and hard earned money away.