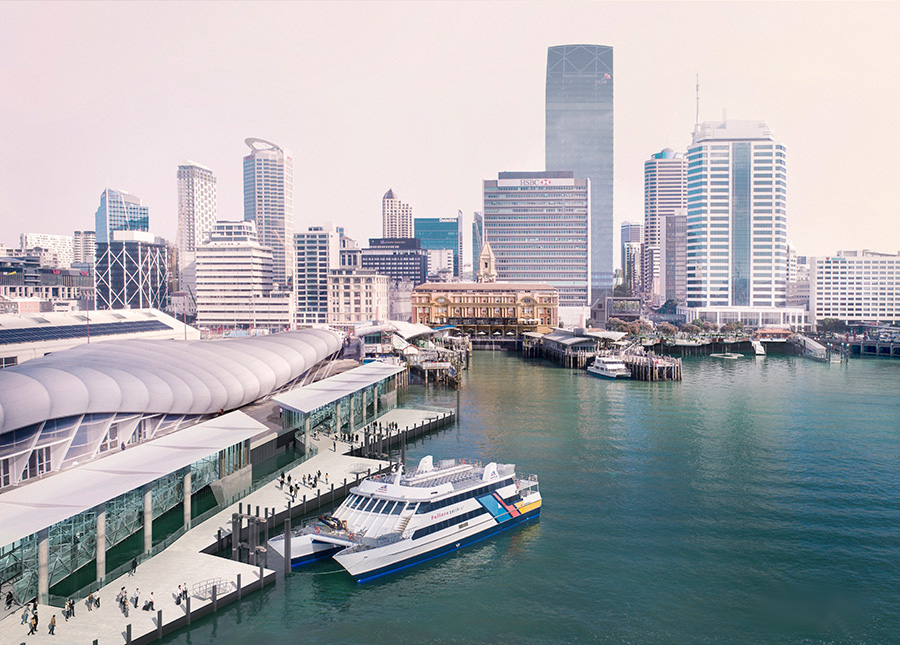 An artist's impression of the planned redevelopment of Queens Wharf to accommodate more ferry services.

And it’s getting set to present a business case to Fullers360 next month for the first boat it’s proposing to build, an electric ferry to run between Auckland and Devonport.

McMullen and Wing chief executive Michael Eaglen says it’s still a work in progress and he’s unable to divulge the exact costs involved. But he’s confident the company can build the ferries.

“We would like Auckland to be the centrepiece of that.”

He says many of the existing ferries in Auckland are nearing the end of their lives and the likes of Fullers360, which runs many of the services, is aware of that.

Eaglen says McMullen and Wing has no plans to operate ferry services itself.

He says the company has a lot of work to do to establish what size of ferries would be needed, and to make sure its proposal provides the best service and value for money for the operator.

“Fullers has stepped up and has been involved with our research and development proposal and they are now looking at electric ferries for their Devonport to Auckland services. At the moment they haven’t committed to buying a ferry from us, but we’ve still got the rest of this month to finalise our business case.”

McMullen and Wing was started in 1969 and is based in Mount Wellington. Over the years it has built a number of boats ranging from Team New Zealand's Black Magic yacht which won the 1995 America’s Cup, through to a number of super yachts and charter vessels. It already carries out refit and maintenance work for Fullers360.

“It’s a very significant opportunity for all of the businesses involved if we can we have a globally leading fleet of electric ferries here in our harbour,” Eaglen says.

He says there has been significant growth in Auckland’s ferry services, with commuters from Hobsonville, Beachhaven, Pinehaven, Gulf Harbour and Half Moon Bay regularly using such services.

"Auckland’s population is predicted to reach two million by 2029 – and ferry passengers are forecast to grow by a third, to nearly 29 million by 2025. We’re seeing steady growth in patronage and need an efficient, eco-friendly and sustainable ferry network to match. Working with McMullen and Wing and contributing to funding, we’re in the preliminary stages of a research and development proposal to prove the viability of electric ferries, and may look to progress this into a more substantial project."

He says Fullers360 has a fleet of 20 vessels currently in its fleet, servicing the tourism and commuter ferry network across 18 destinations.

"All current ferries run on diesel as that’s the most appropriate fuel at this stage, but we’re definitely keen to consider alternative technologies – electric or otherwise – when investing in new vessels for Auckland, as we take the health of the Hauraki Gulf seriously," Horne says.

"Fullers360 is still in early planning stages for electric vessels. We need to not only prove the viability of the electric technology but also ensure practicality, such as ability to build appropriate wharf infrastructure. We’re optimistic and look forward to sharing progress and any updates as we’re able."

In a report released last year entitled: Unifying the Hauraki Gulf: Calculating the Contribution of Ferries, the company outlined its plans to expand its services.

“Use of public transport – including ferries – is up significantly. Ferry use rose 37% from just over 4.5 million at the beginning of 2010 to 6.16 million for the year to March 2018. As the city’s population surges, ferry services play a vital role in reducing road congestion – and getting Auckland moving.”

Auckland Transport (AT) spokesman Mark Hannan says it would support any plans to introduce electric ferries in Auckland, but the proposal is being led by Fullers360.

“We’re talking about a private operator here, but we would support them on it,” Hannan says.

He says AT doesn’t have any plans to buy or own ferries itself.

“But we do want to expand ferry services in Auckland and there’s definitely room for growth there.”

He says the launch of new ferry services from Hobsonville Point is a recent example.

“That has exceeded all expectations.”

AT figures released in March show ferry services totalled 6.2 million passenger boardings for the 12-months to February. An increase of 2.5% on the previous year. Patronage for February 2019 was 0.59 million, an increase of 7.2% on February 2018 and 7.4% below target.

A Fullers360 graphic showing its plans for more ferry services.

Interesting question, whether to electrify. There could be a case for biodiesel here, one of the niche places it might make more sense.

Ceteris paribus rears it's head too - how many of these trips are 'going to work' and how many of those 'jobs' will continue into the no-oil or post-collapse era?

meanwhile the ferry on the manukau never happened ?
http://www.stuff.co.nz/business/industries/10544302/Auckland-ferry-plan-...

Thankfully... Awhitu and Clarks beach don't really have enough population to make it anywhere near profitable do they? Would have ended up being another massively subsidised money pit.

those destinations where not good but waiuku and karaka/ Weymouth wattle downs/
would have made more sense, especially if they could somehow do a stop at the airport

It was more like someone kept on pinching the engine!

Electric ferries are certainly workable, though it is probably a couple of years premature in its economics - the battery cost will come down in price by a factor of two or more as production increases dramatically to service growing car market over next 5 years, so with early adoption will come a cost penalty, whereas in a couple of years they are likely to be cheaper to operate than diesels.

I don't mean to be a party pooper but I'd be more impressed if we were thinking of manufacturing out own lithium ion phosphate batteries instead of planning ingenious ways to using stuff purchased from overseas.

For short journeys over flat waters electric battery ferries will be the most efficient.
For longer ocean going journey's hydrogen might be the better option as it has better energy density (per weight).
Orkney islands are aiming to launch the world's first hydrogen-powered seagoing ferry using its excess wind power electricity generation to make the hydrogen.
https://www.ft.com/video/11f9b532-07e1-4477-a6bb-1a709870dac6
Port Glasgow-based Ferguson Marine Engineering Limited has successfully led a European consortium in a bid for EU funding support to pave the way for the building and launch of the world’s first sea-going car and passenger ferry fuelled by hydrogen. The supported development is expected to cost around €12.6 million.
The vessel is planned to operate in and around Orkney, which is already producing hydrogen in volume from constrained –hence otherwise wasted – renewable energy.
https://news.st-andrews.ac.uk/archive/ferguson-marine-to-develop-renewab...
The Helen Clark Foundation have a report about the role of innovation in getting to carbon zero -What place is there for next generation energy such as "green hydrogen"?
https://www.helenclark.foundation/our-impact/

I just love this stuff where we look at new stuff - and that isn't boring IT. We could be thinking of how to reorganise the ownership and chargeouts for the grid. Then you could own a windmill somewhere else in the country feeding your own power into your batteries downtown. Or own your own solar somewhere, feeding your hydrogen plant. Or both.
A bit of co-operation needed.

That oh-so-enthusiastic Helen Clark person got an email from me. A long one. Explaining EROEI. Which I'm betting she'd never heard of.

That is the trouble with people who start with the need to believe.

Having checked again, I'm confident that hydrogen from solar is negative EROEI - it takes more energy to produce, than it delivers. Sure, it can be done - but don't expect to run society as we know it on such a low return.

If batteries do become cheaper then are the electricity companies at risk in the short term? In the long term, according to your second link, the grid will need a 15% increase in generation to accommodate EV’s. In the short term however, NZ’s high buy sell kWh differential may prompt larger scale uptake of solar with storage, which is good for the individual but counter-productive for the country. Also, how many billion dollars, or what % of NZ GDP will be spending on importing batteries in the future? Perhaps it’s not that bad because we import everything else.

we have the materials here to make batteries but will we, or as per normal export the raw materials and import back the finished products,
if this government (greens) wants to move away from oil and gas they should be investing in new tech and helping companies get up and running
A recent GNS Science study, commissioned by the Ministry of Business, Innovation and Employment, revealed lithium potential in several areas.

That included the central North Island and the Hohonu Range on the West Coast of the South Island, nickel-cobalt potential in Nelson-Tasman-Marlborough and Southland regions, with potential for other rare earth minerals on the West Coast.

You can generate power on your rooftop at Stanley point. Then as you hop on the ferry to the city your card gives you a free ride, because you contributed power to charge the boat batteries.
That will take a rejigged financial system around the grid and a rejigged physical grid.
Call it distributed generation.