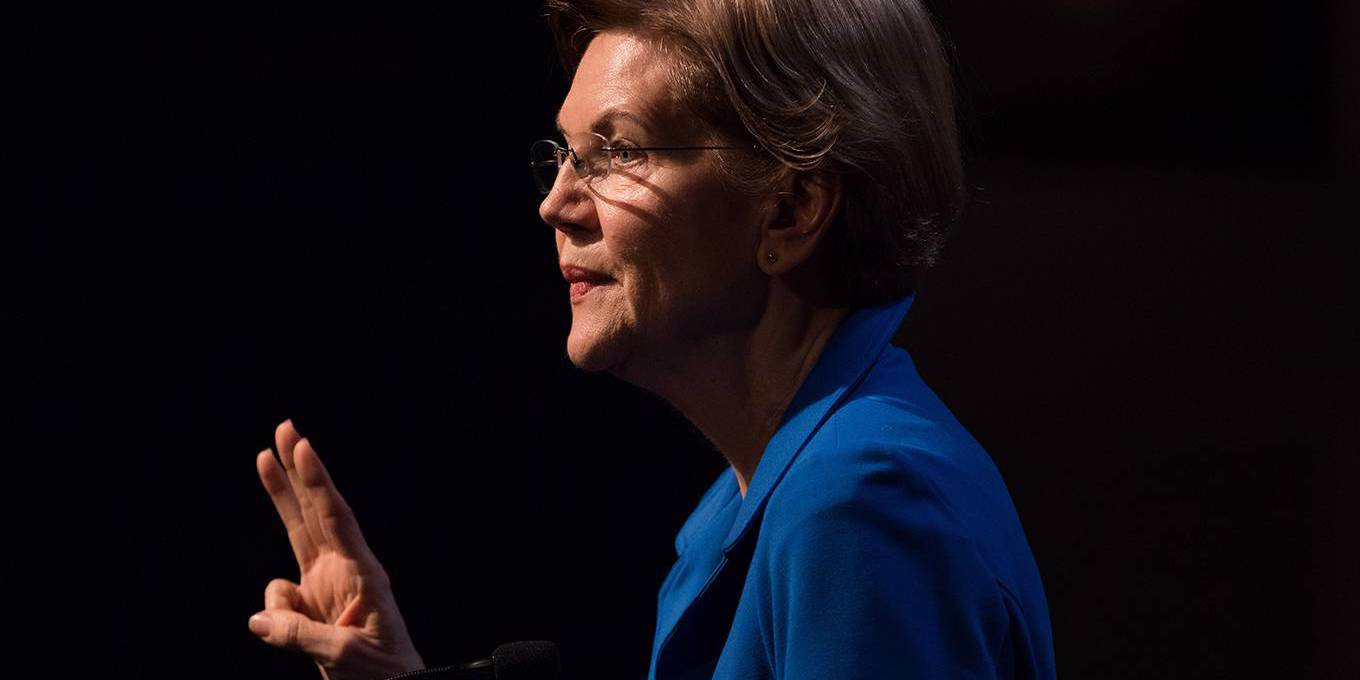 Forget the stock market and the low unemployment rate: the US economy isn’t working. Productivity growth, a key gauge of economic health, remains historically low. Median wages, an indicator of middle-class living standards, have barely grown in four decades. Inequality is high, and market power is increasingly concentrated in the hands of just a few companies. Americans used to dismiss Europe as the land of government-protected, noncompetitive firms. Now, European markets in most industries appear more competitive than those in the United States.

The complacency of America’s political class has exacerbated these problems. For years, two trite approaches have dominated economic-policy debates. The right has clung to a belief in “trickle-down” growth, which translates into doing whatever is good for business, because corporate profitability will boost investment, employment, and wages. But it turns out that serving established corporations’ interests and eschewing regulation does not encourage competition or spur the kind of innovation needed to boost productivity growth. Siding with bosses at the expense of workers and consumers may be good for shareholders, but it doesn’t deliver healthy wage growth for average Americans.

The left, meanwhile, has focused primarily on redistribution, most recently seizing on proposals for a wealth tax with which to finance more generous transfers or even a universal basic income. There is little doubt that the US economy needs more infrastructure investment, a better social safety net, and stronger anti-poverty measures. Taxes on the rich have reached record lows at a time when the US is in dire need of more federal-government revenue and spending. Yet, historically, no society has achieved broadly shared prosperity from redistribution alone.

Rather, shared prosperity has typically rested on three pillars. The first is fiscal redistribution, whereby taxes on the rich are used to provide public services and transfers to the needy. The second is a plentiful supply of jobs with relatively high pay and some degree of stability, which in turn depends on the presence of laws protecting workers (otherwise employers will shift toward lower-quality, lower-pay jobs).

The third pillar is steady productivity growth, which is necessary for bolstering wage growth across the population. Wage-boosting productivity growth requires a specific form of technological change: the kind that is not narrowly aimed at eliminating workers from the production process. But it also requires regulations to prevent one or a few firms from achieving excessive dominance in an industry or over the whole economy.

Until now, a “good jobs” agenda has been largely absent from political debates. But in a recent campaign speech, Senator Elizabeth Warren of Massachusetts, one of the leading contenders for the Democratic presidential nomination, checked all the right boxes. Departing somewhat from her previous focus on taxing the super-rich and redistribution, Warren emphasised the importance of broad-based growth, and even identified some of the structural problems underlying stagnant US productivity.

One hopes this speech represents a turning point for Warren’s campaign, and for the Democrats generally. But even if it does, Democrats need to go further in addressing the root causes of US economic malaise. Warren is correct to worry about corruption and market concentration (particularly in the tech industry). And she is right to advocate stronger protections for workers and giving labor more of a voice in corporate governance. But she still has offered only a partial solution.

Imagine that the federal minimum wage was increased to $18 per hour, and that workers were given seats on corporate boards. The fundamental productivity problem would remain, only now many firms would automate even more tasks and reduce their workforces. That’s why any strategy for changing the technological trajectory of the economy must include protections for workers. Labor’s share of national income has fallen sharply over the last two decades for two reasons: firms’ large-scale replacement of workers with machines, and workers’ simultaneous loss of bargaining power.

Automation does of course lead to faster productivity growth, but not when it is pursued excessively – that is, when companies automate processes that could still be carried out more productively by humans. When companies focus solely on automation, they risk missing out on the gains that otherwise would have come from technologically augmenting their workers’ productivity.

The question, then, is why there has been such a push toward automation in the US economy. For starters, US tax policies have come to subsidise capital investments, which has created a perverse scenario in which firms can actually profit from using less productive machines, because payroll is taxed whereas the adoption of robots is subsidised via various tax credits and accelerated depreciation allowances. Moreover, the prevailing corporate business model, especially that of Big Tech firms, is now charting the course of technological development for the entire economy. The more corporate America focuses on automation, the less investment there will be in technologies that could be used to enhance worker productivity.

At the same time, public support for basic research and development has declined precipitously in recent decades. Historically, government funding has played a critical role in determining not only how much research is conducted, but also its direction. Many of the most consequential innovations of the postwar era – from early computers and antibiotics to sensors and the Internet – were spearheaded by government demand and sustained by generous government support. These breakthroughs created new productive opportunities for workers, and fueled the growth of good jobs in the economy. With public funding now dwindling, new research has increasingly clustered around existing paradigms and followed the path of least resistance toward labor-replacing automation.

To be effective, then, a twenty-first-century economic-policy agenda must shape the direction of technological development and deployment, and restore workers’ bargaining power. Fortunately, the two goals are complementary. Business as usual, with big firms setting the agenda, will lead to ever-more automation, whereas a greater voice for workers, combined with a more democratically determined innovation strategy, would position the US both to increase productivity and generate better opportunities for the majority of citizens.

One hopes that Warren’s change of focus is the first step in this direction.

Daron Acemoglu is Professor of Economics at MIT. He is the co-author of Why Nations Fail: The Origins of Power, Prosperity, and Poverty with James Robinson, a professor of government at Harvard University. Copyright: Project Syndicate, 2019. www.project-syndicate.org

What a load of bs. Firms trying to automate is because of tax policies to subsidise capital investment? No, it is primarily as you said; it creates productivity growth, which you said is the thing that is lacking. You lament the fact that the technology is directed at automation rather than augmenting workers' labour. Are you saying the tax policies don't cover that type of capital investment? No, you just made some crap up so you can have a bob each way on productivity growth, meanwhile staying woke by not calling out by far and away the main cause of wage growth stagnation: rampant low wage labour immigration.

The majority of automation projects I work on are aimed at reducing headcount. You can call that productivity increase if you like, but its really not. Most of these projects (at least the ones i'm working on) are in markets that don't have highly elastic demand, so there is little/no need to make more product, and there is little market growth from making it cheaper, it'll mostly turn into increased margin for the company, not decreased cost for the consumer.

Sooo... same amount of stuff created, but fewer people making the stuff?
This is called productivity, as in output per worker. You've just described how a company can create wealth through higher productivity.
Is it possible you are confusing productivity with the unrelated goal of full employment, with a side of supply and demand?

they aren't creating more wealth, they are concentrating the existing wealth creation in fewer and fewer pockets.

They will not repurpose those employees into other wealth generating activities, they will eliminate them from the workforce.

He didn't say they were creating MORE wealth, he said same amount of stuff created, but by fewer people. Per person - an increase in productivity.

Its likely the people needed to build and maintain the automation program are paid more than the jobs that were lost. The increased demand for automation leads to the creation of many highly paid jobs associated with automation.

- and also afford to pay higher wages. The immigration fuelled low wage economy is probably the largest factor in our chronic productivity performance. If we import enough low cost labour, then we could possibly compete with the Bangladesh garment industry. But what is the point in that. (of course we would need people to be living in shanties at a subsistence level. - sound familiar? not that far of the living conditions that some of our people experience any way)
It is simple.
-Less immigrants
-Less housing pressure (reduce/eliminate accommodation cost government subsidies)
-Higher wages force employers to chase higher productivity so they can pay the higher wages. (eliminate government wage related subsidies)
-Those enterprises that cannot cut the mustard, fail. And so they should. We should not worry because we will all be on higher wages. The labour market will self balance at the highest wage level.
- Increasing wages will increase the CPI and raise interest rates; which will undermine the capital speculation ponsie scheme, directing capital into the required productivity increasing investments.

Higher wages and far cheaper housing - it is a recipe for educated skilled Kiwis to stay in New Zealand and bring up families in this uniquely beautiful country.

And keep it beautiful, instead of being over run half the rest of the world; agriculture screwed too hard to support our under productive ever growing population and finally keep a check on pollution and global warming, both of which are directly proportional to the population.

There's no such animal as a 'democratically determined innovation strategy'.

Most of the innovations mentioned in the article come out of the military or the (closely related) space race. Neither were remotely 'democratic' and the 'innovation' element was the traditional one of getting inside of, and staying inside of, the enemy's OODA loop by supporting wild-ass ideas in secrecy.

And the nature of research is that it cannot easily be directed towards specific end states. Most of the products, medicines, and software we now enjoy had a large element of 'happy accident' - where the outcomes of experimentation in often unrelated fields of research, closely observed and recorded in true scientific fashion, resulted in breakthroughs. But few of those outcomes were predetermined.

Finally, politicians 'starting conversations' about where we need to be, has zilch to do with innovation, strategy, or productivity. Their sole aim is to get, and keep, elected, and their nose in the Gubmint trough.

The point is, if you have open borders you have an endless supply of workers which will bring prosperity to all, which is why all democrats support open borders and oppose the wall. The money being wasted on the wall could end world poverty. Donald Trump is impeached and it is all over for him, time for the deplorables to stop living in the past and join the progressive wave of prosperity.

I thought "diversity" had already solved all these problems.