Henry Thomson explains that the American presidential election isn't about winning the popular vote, but controlling how the Electoral College 'votes' are assigned

Henry Thomson explains that the American presidential election isn't about winning the popular vote, but controlling how the Electoral College 'votes' are assigned 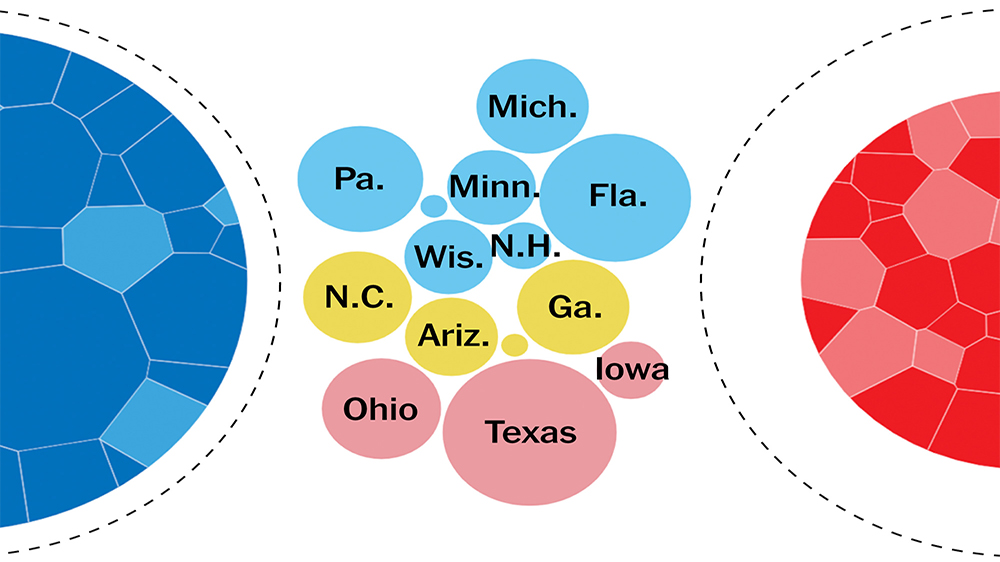 With the New Zealand General Election out of the way, readers who can’t get enough political news might be turning their attention to the upcoming presidential election in the United States.

However, the contest here appears far from riveting. The results look likely to be as predictably lopsided as back home. Most national opinion polls have the Democratic presidential candidate Joe Biden leading President Trump by double digits and estimate the probability of Trump’s reelection at well under 20%.

Perhaps Kiwis looking for diversion should look instead to the more competitive fixtures of the National Provincial Championship – which I am astounded to learn is now called the Mitre 10 Cup and includes 14 teams instead of 9, among them such minnows as Bay of Plenty and Manawatu. Apparently Canterbury has even loaned the Ranfurly Shield to Hawke’s Bay in some mysterious act of generosity; New Zealand is truly no longer the land of my youth.

Or perhaps the election here might be worth watching. I have no doubt that the rugby in Palmerston North will be compelling this season. But the intricacies of the US presidential electoral system, combined with the roller-coaster of events that 2020 continues to serve up, leave a considerable amount of uncertainty around the outcome.

Opinion polls ask a sample of individuals about their prospective vote choice. They rely on that sample being representative of the broader voting population to be accurate, they assume that individuals’ responses are “true”, and all polls have a margin of error. After learning hard lessons at the UK parliamentary election in 2015, the Brexit vote in 2017, and the US presidential election in 2016, pollsters have made changes to their sampling methodology to improve the accuracy of their models. Let’s take their word that those changes have been effective.

Nonetheless, in predicting the winner of the presidential election national-level opinion polls are very uninformative. The president is not chosen by the popular vote, but by the Electoral College. A candidate needs to win in a state-by-state fashion to put together a majority of 270 votes in that body.

When we look at the presidential election as a state-by-state race, the result is not a foregone conclusion. Trump trails Biden in New York and California by around 30 points, while his lead is less than 10 points in Texas and essentially nonexistent in Florida. Given that these four states alone make up around a third of the US total population, it is easy to see how Biden’s national approval ratings are sky-high.

Our attention is therefore drawn to the so-called “battleground” states: those where neither party has an unsurmountable advantage in partisanship and voter registration, and where the population is large enough to make them a genuine prize in terms of Electoral College votes. Those states include Florida, Pennsylvania, Michigan, Wisconsin, North Carolina and Arizona. A Trump campaign strategist would add Minnesota to the list and a Biden strategist would add Georgia. It is through some combination of victories in these 6-8 states that the president will be chosen.

When we consider current opinion polling in the battleground states, the race is significantly tighter than at the national level: Biden is leading by an average of less than 5 points, which in many cases makes his lead lie within polls’ margin of error. It is also worth noting that the current state of polling puts Trump slightly ahead of where he was at the same stage of the race against Hilary Clinton in 2016.

For this reason, we should be careful when we consider the current opinion polling. Polls are less frequent at the state level than at the national level, so we are making predictions based on less data, and every state has its own idiosyncrasies – such as in their Senate races or in turnout patterns – that could swing a result slightly. Although there is a clear advantage for Biden, there is still an outside chance of reelection for Trump.

It is very hard to assess the impact of the rapid-fire shocks within a broader crisis that have characterised this campaign season. Voters have been buffeted by a baffling sequence of minor and major developments in the space of a few weeks: the fracas of the first presidential debate; revelations about Trump’s tax returns; allegations of corruption against Biden and his son; the death of Supreme Court Justice Ruth Bader Ginsburg; the nomination of her presumptive successor Amy Coney Barrett; and let us not forget Trump’s contraction of, and swift recovery from, Covid-19. With all this and a months-long pandemic occurring in a highly polarised electorate and broader political system, Americans are exhausted. Many are looking forward to putting this election – and this year – behind them.

As I write, millions of Americans have already voted, either in person or by mail, and many more will do so before November 3. In Arizona, 88% of votes were cast by mail in this year’s primaries. This somewhat moderates the impact of upcoming events, such as the final presidential debate this Thursday night. However, with the outcome in battleground states so close and the stakes of the election so high, New Zealanders would do well to stay tuned to the ongoing political soap opera.

Henry Thomson is originally from Amberley, North Canterbury and is now an Assistant Professor of Political Economy at Arizona State University. His research focuses on the political economy of authoritarian rule and transitions to democracy. You can read more about his research here and follow him on Twitter @HenryRThomson. His earlier letters are here.

It's all going to catch up with Trump eventually, voters don't like to be treated as Suckers. NYT article: $421 Million in Debt: Trump Calls It ‘a Peanut,’ but Challenges Lie Ahead. "The president on Thursday played down big loans he guaranteed for his struggling businesses. But much of that debt is soon to come due in the midst of declining revenue and an I.R.S. audit that could cost him over $100 million." https://www.nytimes.com/2020/10/16/us/trump-taxes.html

Smoking Joe is no better https://nypost.com/2020/10/18/media-avoiding-the-posts-hunter-biden-stor...

That Murdoch-owned rag is Trump’s favourite paper. Not an impartial source.

Crook vs Knave. Take your pick ?

Many actively disliked Hillary, Biden is generally respected. Hillary forgot working class white men ,and paid the price. It's women voters that will be Trump's downfall.

It will be close and lots of arguing and delays post election.
But in end, Trump will lose.
Has alienated lots more black voters but especially (as Collins did here) floating middle of road, non-political female voters aged 45-65, who care more in general about CV19 and people in general, than they do about money and nastiness. I suspect Biden will win by about 25 in the electoral college and by about 5-7% in the overall poll.

These guys forecasts are simulating 150 vote margin in the electoral votes . If Florida goes biden , it will be about right .
https://projects.fivethirtyeight.com/2020-election-forecast/

I had a zoom call this morning which included an American professor in a university in Ohio. he is also a consultant to the Federal Reserve of Chicago and he explained some of the complexities of their voting system.

The potential for one side or the other to cry foul is huge and i fear that it will be a drawn-out and very messy affair. If only the result didn't matter so much globally, then we could all just watch and laugh.

Trump will squeak through to a second term, but the Senate will go to the Democrats. A real tussle for the next 4 years or a 4 years vacation for Trump to enjoy the perks of office. Your pick.