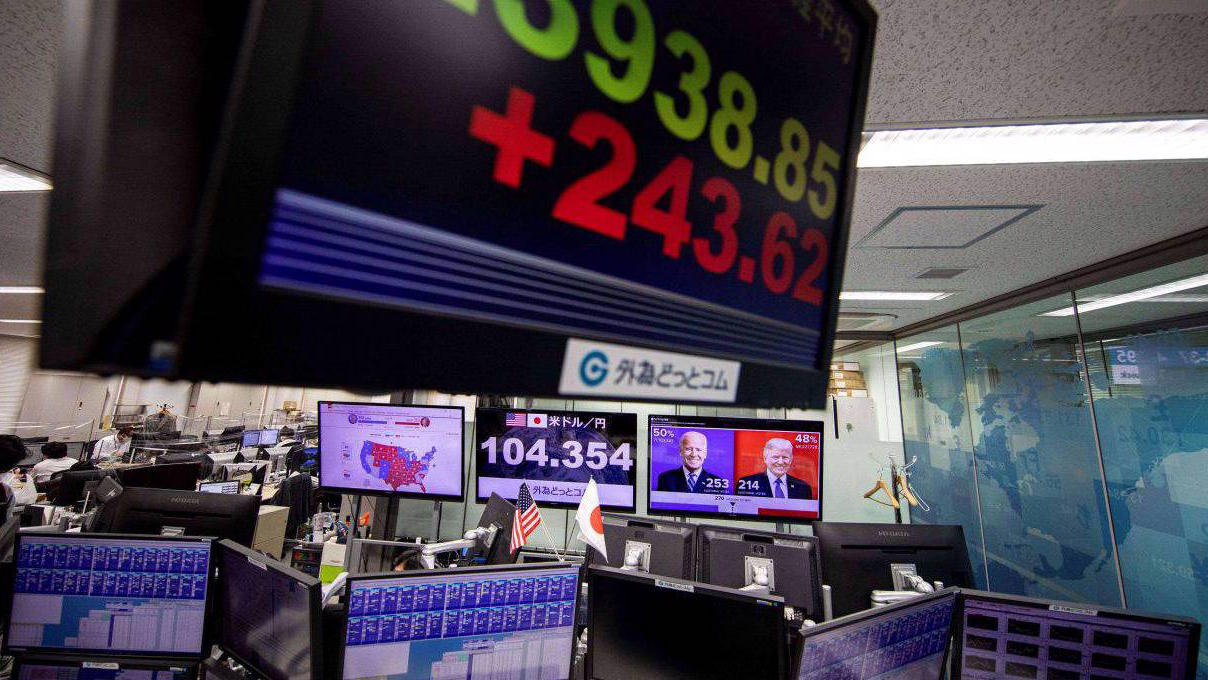 By Willem Buiter and Anne Sibert*

Even though uncertainty about the outcome of the US presidential election is likely to drag on, the stock market has been rallying. Provided that the election is decided within weeks – rather than months – and that both candidates ultimately accept the outcome as legitimate, business sentiment and household optimism can be expected to remain robust. Indeed, the only surprise this week is how close the Electoral College contest turned out to be. The delay in counting the votes was to be expected, and market ebullience and positive economic sentiment are in keeping with previous trends.

Insofar as the mainstream media’s pre-election forecasts were taken seriously, markets seem to have predicted – right up until November 3 – that Joe Biden would be a shoo-in, and that the Democrats would retake the Senate and maintain control of the House of Representatives. Had that happened, the Democrats might have interpreted their sweeping victory as a mandate for an activist progressive agenda. This likely would have included significant increases in public spending on goods and services (including health and education); business-unfriendly tax and regulatory reforms; more protectionist trade and foreign-investment policies; and far-reaching income redistribution (including boosts to Social Security and unemployment benefits). Markets would have perceived this agenda as bad for risk-asset valuations.

But now that Republicans are on course to retain control of the Senate and made surprising gains in the House, there will be no mandate for a bold Democratic agenda. Any policies that are enacted at all will have to win at least some bipartisan support. Lawmakers will be reduced to bargaining over measures that have broad buy-in, such as business-friendly cyclical fiscal stimulus. Compared to the earlier expectations of a blue wave, markets view this scenario as grounds for celebration.

To be sure, there has been a great deal of political messiness and dysfunction – including potential constitutional issues, baseless claims of election fraud, and a delay of several days or even weeks. But much of this was anticipated, given that the United States remains in the depths of a pandemic, and that US President Donald Trump has long signaled precisely how he would react to a close election. The media and election officials warned the electorate for months that there would be delays, and that the victor likely would not be known on Election Day. Demands for recounts were to be expected. This in itself is not worrisome; and recounts rarely change results.

In this unconventional election, with its large volume of mail-in ballots and exceptional rancor, it is entirely normal for either or both sides to respond to a close outcome with questions of whether rules were broken. But, again, as long as the proper authorities resolve these disputes in the next few weeks, markets most likely will tolerate the uncertainty.

On the other hand, if the final outcome is delayed to a degree that summons memories of the Bush vs. Gore dispute, which dragged on until December 12, 2000, market optimism and economic sentiment will probably start to suffer. There must be some inevitable point when the continued lack of resolution becomes a problem. Though it remains unlikely, the outright refusal by one of the candidates to accept the official outcome would have serious implications for markets and the US political system. Among other things, such a crisis would probably prevent the enactment of much-needed and overdue fiscal stimulus bills, leaving the US Federal Reserve, once again, as the only countercyclical game in town.

In any case, the most likely electoral outcome would have a positive impact on markets, and a more or less neutral effect on the wider economy. Biden is not a self-proclaimed socialist like Bernie Sanders, and he is almost certain to face Republican resistance in the Senate. Moreover, six of the nine Supreme Court Justices are now staunch conservatives. It is hard to imagine a seriously business-unfriendly agenda being implemented under these conditions. At the same time, a meaningful countercyclical fiscal stimulus package will be a foregone conclusion. As far as the markets are concerned, what’s not to like?

Willem H. Buiter is Visiting Professor of International and Public Affairs at Columbia University. Anne Sibert is Professor of Economics at Birkbeck, University of London. This content is © Project Syndicate, 2020, and is here with permission.

Biden is not a self-proclaimed socialist like Bernie Sanders, and he is almost certain to face Republican resistance in the Senate.
Hmmmm ...Sanders was sidelined in less than auspicious circumstances by his own party, just as Corbyn was by his.

Jeremy Corbyn wasn’t suspended from the Labour Party for anti-Semitism, he was defenestrated for anti-Capitalism

But what if the purge of Corbyn is the Labour Party’s day of shame for the opposite reason, because it took place at all? What if Corbyn was purged not because of his (non-existent) anti-Semitism, but because of his critical stance towards capitalism, with anti-Semitism used as a cover? What if Corbyn’s purge is just the sad latest link in the chain of current anti-Leftist propaganda which brands as “anti-Semitic” every agent who seriously critiques the existing order, from Bernie Sanders to Yanis Varoufakis.

"a meaningful countercyclical fiscal stimulus package will be a foregone conclusion"
Really? What makes anyone think that deficit-hawkism will not overrun Senate Republicans, tanking the economy? Perhaps the smart money on Wall St has formed the opinion that given almost certain governmental grid-lock, QE is going to be the only game in town. Probably at a magnitude that will make previous central bank efforts look timid...

Is the Left now more neoliberal and favourable to large business and corporations than the Right? That seems to be where the big money is going.

The Democrats have been pro-big business and definitely pro-Wall Street for a long time. If anything, the Trump administration appeared to want to rein in the crooks on Wall Street. Mind you, the cracks in that facade have become obvious.

Isn't it wonderful how all analysts are always right, in hindsight? It is very easy to justify an event after it happened, not so easy to predict it before it happens.
Personally speaking, I was expecting some significant short term market turbulence in case of contested and/or ambiguous results, but so far it seems that I was wrong.
I guess that the markets have been so manipulated and distorted by all major central banks that many punters are now betting on asset prices (be they shares, housing or whatever) to be a safe bet regardless of what happens in the real world.

Turbulence for shorts without doubt.

The money was invested in their candidate, and so at the moment they are confident in their return.

Isn't it wonderful how all analysts are always right, in hindsight? It is very easy to justify an event after it happened, not so easy to predict it before it happens

Take a look at the rat poison community. Many of the opinion leaders that said the price would appreciate are correct. But what's even more beautiful is that they all expect large corrections at some stage. Some even go as far to say BTC could become worthless.

How's that for integrity. Quite a contrast to the slurp you might find in Granny Herald.

“The chart shows the market value of all publicly traded securities as a percentage of the country’s business–that is, as a percentage of GNP. The ratio has certain limitations in telling you what you need to know. Still, it is probably the best single measure of where valuations stand at any given moment.” –Warren Buffett, December 10, 2001

The single best measure of valuations, according to Warren Buffett, currently sits just off its highest reading in history. In other words, the stock market has never been as expensive as it is today, largely the product of soaring valuations amid deteriorating fundamentals. Not only does this mean that forward returns will likely be exceptionally poor, it means that downside risk has also never been greater than it is today.

When you have an opinion piece masquerading as advice - beware! When you have said piece full of phrases such as "should, could, maybe, historically, likely, unlikely, probably etc etc" then run for the hills and keep your wallets close.
This diatribe does exactly nothing to fulfill the headline promise - poor effort

Everything seems to look up now worldwide, when the first sign of general down turn forecast? anticipation action already been established.. the MMT of money printing. It's a sure similar moves for the future. Not much different than consuming regular Panadol & Ibuprofen when the first sign of headache come to revisit, until someday it's no longer fixable by those meds.