Eric Posner argues that the past four years of norm-breaking have strengthened, not weakened, democratic institutions

Eric Posner argues that the past four years of norm-breaking have strengthened, not weakened, democratic institutions 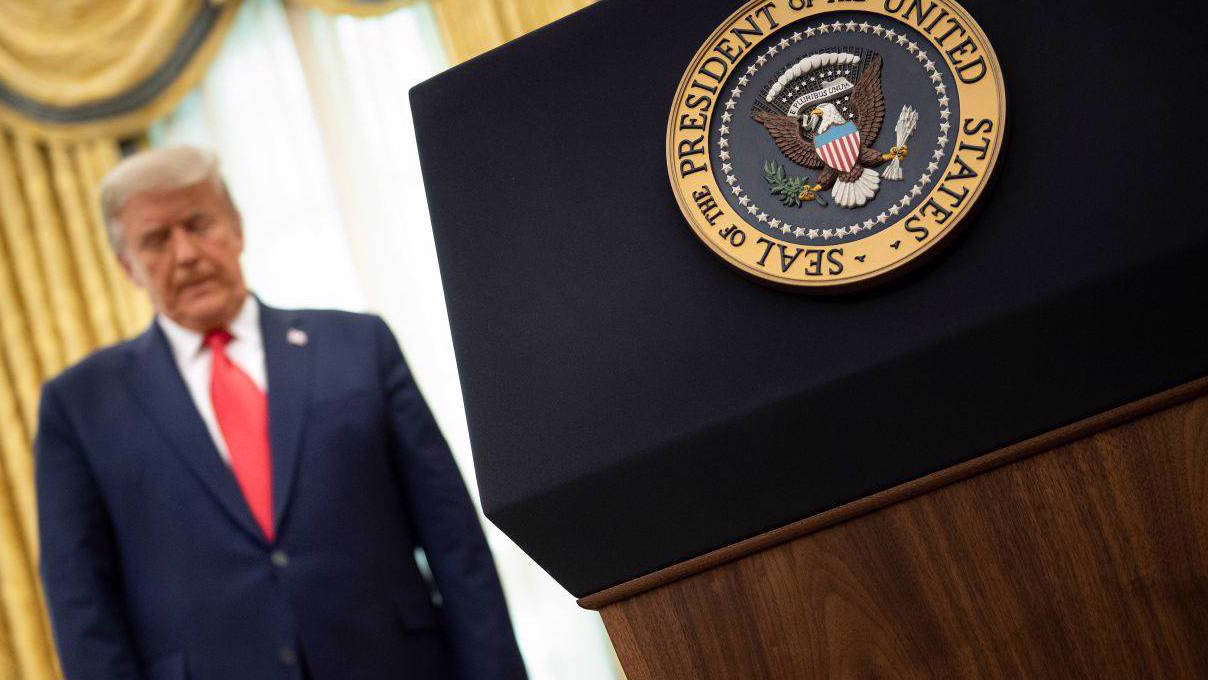 The all-but-completed US presidential election has upset a range of lurid predictions. We were told that ballots would not be counted, voting machines would be hacked, state legislatures would order electors to defy the will of the people, armed thugs would intimidate voters, and riots would erupt – with the police taking the side of the “law and order” president. President Donald Trump, true to form, has indeed refused to concede, accused Democrats of fraud, and challenged the election in the courts. But he has no realistic prospect of remaining in office after Inauguration Day.

Those arguing that Trump’s post-election behaviour amounts to an attempted coup d’état are misreading the situation. Trump’s refusal to concede means nothing. His legal challenges are frivolous and have been swatted away by courts. He has lost.

While many Republican voters tell pollsters that the election was stolen, hardly any of them have taken to the streets or pursued tactics that one would expect from people who truly believe that democracy has been subverted. There has been no Hong Kong-style uprising. Trump’s attacks on American institutions are largely a form of political performance art.

It is tempting to say that Trump has nonetheless damaged the US electoral system, and American constitutional democracy more generally. The basic claim – repeated with extraordinary frequency over the past four years – is that Trump has subverted certain “norms” that are crucial to the functioning of democracy. These unwritten rules ensure that the two main political parties cooperate, that the will of the people is respected, and that politics does not degenerate into violence. If a president flouts or attacks these norms, they will disintegrate, making democracy impossible.

This worry was certainly legitimate. But, paradoxically, Trump’s attacks on American democracy seem to have strengthened rather than weakened it. Consider the election. Political scientists have lamented for decades that too few Americans vote or bother to pay attention to politics. Yet voter turnout this year as a percentage of the eligible population was the highest it has been since 1900. Despite the hardships and constraints of the worst health crisis in a century, people donated money to candidates, argued with each other online, and organised on a massive scale. Notwithstanding the conspiracy theorising, polarisation, and persistent sense of turmoil, these are signs of a healthy democracy.

Similarly, while Trump has attacked the press as the “enemy of the people,” often criticising various journalists by name, major media outlets have flourished. Print and digital subscriptions to The New York Times, one of Trump’s chief “enemies,” have soared, from three million in 2017 to seven million in 2020. CNN, MSNBC, and Fox News all enjoyed record ratings in 2020. Nor is there evidence that journalists or commentators have suppressed stories or opinions because they feared government retaliation.

The judiciary, another frequent target of Trump’s criticisms, has also maintained its independence. In addition to rejecting Trump’s baseless election challenges, judges have dealt his administration defeat after defeat. Trump’s efforts to deregulate the economy, while applauded by conservatives, have been blocked by courts in the vast majority of cases brought before them – and far more frequently than with previous administrations. Courts have also interfered with many of Trump’s signature efforts to limit illegal immigration, in some cases sharply criticising the administration. And while Trump has moved the judiciary to the right, the judges he appointed appear to be taking their jobs seriously.

The larger point is that violations of norms do not always succeed; often, they expose flaws that can be ameliorated through the democratic process. After President Franklin D. Roosevelt violated the norm against serving more than two terms, the norm was codified in the US Constitution with the Twenty-Second Amendment.

And even when violations of norms cause them to disintegrate, that’s not always a bad thing. In many cases, the norms reflected past practices and had outlived their usefulness. In retrospect, the presidents who violated them seem farsighted rather than retrogressive. In the nineteenth century, presidents violated norms that prohibited them from campaigning while in office (which was considered undignified) or from appealing directly to the people (rather than working through Congress). These norms disintegrated because earlier notions of elite governance lost their purchase on the polity as democratic ideals strengthened. Political norms, like moral norms, are powerful precisely because they cannot be destroyed by a few prominent people. When they erode, it is because they conflict with emerging principles or new political realities.

By contrast, Trump’s attacks on competing power centres in the US political system mostly served to remind people why these power centres are so important in the first place. Trump himself seems to have understood this, considering that his attacks were merely rhetorical. As far as we know, he did not take concrete actions to undermine the press or weaken the courts – for example, by ordering investigations or prosecutions, or pushing legislation that could hamper their activities. Nor did he use law enforcement or other government processes to harass Democrats or other political opponents, as much as he might have wanted to. His incendiary rhetoric backfired – costing him important votes among Republicans and stimulating massive turnout from Democrats, while doing little to harm his targets. Americans’ confidence in public institutions, as measured by Gallup, appears not to have declined over the course of the Trump administration (though a downward trend long predates him).

Trump probably hoped (and continues to hope) that by attacking the election, he could sway Republican politicians, judges, and others to overturn the outcome. Perhaps, if enough voters took to the streets, and enough officials calculated that a grateful Trump would award them with future sinecures, these officials would have delivered for him. But that didn’t happen.

It will be a long time before historians have fully assessed Trump’s impact on America’s constitutional democracy. Clearly, his term in office has exposed some serious shortcomings, probably the most important of which are the outsized influence of ideologically extreme voters in the presidential primary process, and the excessive role of money in politics. But American democracy remains strong – at least for now.

Eric Posner, a professor at the University of Chicago, is the author, most recently, of The Demagogue’s Playbook: The Battle for American Democracy from the Founders to Trump (All Points Books, 2020). This content is © Project Syndicate, 2020, and is here with permission.

Frivolous claims? 1.8 million postal votes sent out In Pennsylvania. 2.5 million returned. In other states, the discrepancies were not as large but were significant.
The author ignores the fact that many of the judicial officials who have refused court challenges were Obama era appointees, making political=not judicial-decisions.

https://www.snopes.com/fact-check/pa-mailin-votes-ballots/ the claim is indeed frivolous and misleading (to be generous). And many of the judicial officials are Trump appointees - and court rejections can be appealed if there is any validity to them. The attempt to steal the election is totally by Trump and his enablers.

Not sure who said it when and about whom but it went “out of sorts and out of office.” Former President Trump, there it is.

The numbers are real but they are a mix of data from the state's primary AND general elections.

Lets not get sucked in to Trumps half truths

Can you produce actual evidence for your claim, or would that be asking too much? Where did the claim originate and did you fact-check it? Of course not, because that wouldn't suit your twisted narrative.

Trumps Squatter Gate is just one last grift before he gets kicked out of the White House. It's amazing just how stupid Trump supporters are to keep giving him money. Bloomberg article: Trump, RNC Raised $207.5 Million Since November Election He Lost. https://www.bloomberg.com/news/articles/2020-12-04/trump-rnc-raised-207-...

Don't call them stupid. There are some trump supporters in NZ too. you don't have to go further. just look at some of the earlier comments on this article :).

New Zealanders can't support or not support Trump as they are not US citzens and can not vote in the US election. You can pretend, yell and scream and write how he's goodie/ baddie. Oh and have links from main stream media and fact checks which are written by the main stream media. We can all tell people they are stupid and silly because their opinion is different to ones own though. It's what now is the normal behavior right.

While you can appeal to the "rational person", unfortunately the world has devolved in to a shouting match between the loony left and the rabid right. Neither is constructive and neither actually thinks

The high turnout shows how divided America is , and how strongly voters on both sides wanted to defeat the opponent , not support their candidate. Trump exploited , and expanded that divide.

While the turnout was high for a US election, tens of millions still didn't vote. Those it appears were the indifferent and apathetic.

Its also very difficult to vote. Que for hours in many places .

Interesting alternative view to Eric Posner's in this Atlantic article:

If Trumps bad, then heaven help us.

Aside from the fact that Biden has a long history of pathologically lying -- from claiming he marched with Mandela to having to drop out of his first presidential race for serially lying about his background -- it's bizarre to see a journalist be grateful for being stonewalled:

Don't forget to pay Trumps tax on fools on your way out Henry.

Your link is broken. In fact, so is your whole argument.

Whats the bit of Biden you love?

There's always the bit where Biden is not a moronic reality TV star.

Why do people need to "love" politicians? You can face it, you tried to "own the libs" again, and got "owned".

If a tweet frightens you, this will blow your mind.

As has been repeatedly pointed out in the various court cases - conspiracy theories, tweets and very dubious claims do not constitute fact in a court of law. While you are free to think and even believe what you like - that doesn't make it true no matter how often it is repeated.