Opinion: How Mark Hotchin could redeem himself (a bit)

Opinion: How Mark Hotchin could redeem himself (a bit) 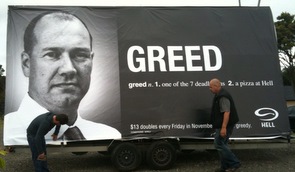 Mark Hotchin and Eric Watson would have to be among the least popular people in New Zealand right now, yet they seem oblivious to the public opprobrium.

Their stewardship of more than NZ$400 million worth of investments was a disaster for more than 13,000 'Mum and Dad' investors.

Promised an investment that would "'weather the storm", those investors now hold shares worth less than NZ$85 million. Life savings have been lost. Retirement plans have been abandoned. Many tears have been shed and nights endured without sleep. It's not an overstatement to say many lives have been ruined. Yet Messrs Hotchin and Watson continue to swan around living a life in the lap of luxury. Hotchin is almost in the habit of waving his lifestyle in the faces of his distraught investors.

He carried on with a multi-million dollar birthday party in Fiji just weeks after interest payments were frozen and was reported to have flown off last month for a 3 month holiday at luxury digs in Hawaii with his family and a personal trainer in tow.

NZ Herald columnist Fran O'Sullivan captured the mood when she described Hotchin's wife Amanda as a Marie Antoinnette-like figure with a 'let them eat cake' attitude after she told a newspaper reporter she didn't need to justify her spending habits to anyone. New Zealand is a small place.

Hotchin may think we have short memories, but this reputational damage is now seeping deep into the national psyche. If he wants to 'work again' as a property developer and financier again in this country he will need to change his approach and win back a few brownie points in the eyes of investors specifically and the public generally.

He does have a slight chance at redemption. In the next two weeks Allied Farmers have to pay NZ$5 million in cash to Messrs Hotchin and Watson as part of the washup from Allied Farmers' share-funded purchase of the Hanover Finance loan book. It is a legal agreement that Hotchin's lawyers Chapman Tripp and Allied Farmers have no doubt pored over in detail in recent months.

It was designed late last year as a sweetener to ensure Hotchin's involvement in the transfer of the loans to Allied Farmer. However, relations between Hotchin and Allied Farmers boss Rob Alloway have taken a decidedly sour turn for the worse.

Alloway uncovered many unpleasant surprises. He has had to write down the value of the loans by more than 2/3rds to NZ$124 million. He is very unhappy with what he found under the hood on closer inspection. He has even talked about referring the details for further investigation by the authorities.

Allied Farmers shareholders, most of whom were Hanover Finance investors, now face the galling prospect of having to pay another NZ$5 million in cash to the men responsible for this calamity. Hotchin is widely expected to use some of that money to finish his mansion on Paritai Drive. Hotchin and Watson could win more than a few brownie points by forfeiting that NZ$5 million payment. They don't need the money. That money could be returned pro-rata in cash to Allied Farmers shareholders.

We'll know within a fortnight whether they deserve to be rehabilitated. Go on. Surprise us.