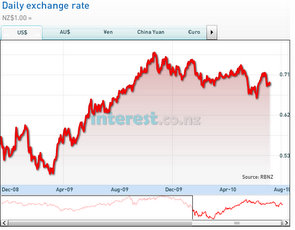 NZ dollar firms through the night on European market strength, but dips after poor Fonterra auction

It has been a very impressive performance from the NZD in the last 24 hours.

Despite yesterday’s activity indicators from the Quarterly Survey of Business Opinion failing to push into strong-growth territory, the NZD has made good gains as Asian bourses and a relatively upbeat assessment from the RBA underpinned risk currencies.

The RBA appeared not to have downgraded its global growth forecasts, overall, although its assessment of Europe continues to be tinged with considerable uncertainty.

While the RBA was still obviously weighing a lot of positives and negatives, it seemed to have left the door open to further increases in the cash rate, should the economic information keep pushing the case.

In this respect, the upcoming Australian Q2 CPI report, due 28 July, could prove important. It’s a reminder that central banks ultimately need to keep an eye on inflation trends, not just GDP, as they set their cash rates.

As the Antipodean sessions wound down, short covering in the AUD gathered pace into the early part of the London day, with the NZD following suit.

Stop loss orders were triggered above the 0.6925 area adding to the positive momentum, before the buying finally ran its course near 0.6970.

Strong gains in European stock markets were generally supportive for the NZD.

Fonterra’s overnight dairy auction results, showing a 13.7% fall in prices, has certainly taken some of the steam out of the NZD in the latter part of the NY day, however.

For today, expect the 0.6880 -0.6900 region to hold with stale short positions likely to be covered on any weakness into this zone. It will take a move back below the 0.6825 region to sour the outlook for NZD in the near term.

In the absence of fresh news from the United States, European investors spent a greater than usual time yesterday morning analysing in depth the RBA’s monetary policy statement. They concluded that it was broadly positive for strategies favouring growth and risk and after the sharp sell-off the previous week, there was a mood of cautious bargain hunting which gradually built into a very positive session for equity markets.

The pro-risk mood was also helped by the publication of the latest Swiss CPI figures which, against consensus expectations of a -0.1% drop on the month, actually showed a plunge of -0.4%; the biggest fall for the month of June in more than a decade.

The Swiss National Bank has recently declared that deflationary forces have largely disappeared – hence its change of strategy in resisting appreciation of the CHF. With the annual rate of CPI now just 0.5% though, investors running short positions in EUR/CHF ran for cover, pushing the pair from 1.3285 to a high of 1.3413 and helping give a more general boost to the Single Currency.

By the end of the European trading day, the euro had hit a fresh 6 week high of USD1.2660. We’ve been highlighting for the last week the recent breakdown in previous correlations between stocks and the USD.

A graphic illustration was provided overnight with price action is USD/JPY. On almost any day in H1 2010, a 2 percentage point gain in European stock markets and higher levels for GBP/USD and EUR/USD would have seen a leap higher in USD/JPY.

Last night the opposite happened as the USD slid to a low of 87.35. There was some talk of Chinese funds buying JGB’s.

While this bears all the hallmarks of a story made up to fit the facts, it highlights the current difficulty in identifying the current market drivers, let alone forecasting their future impact. Markets were initially unsure on what to focus: is the US economic glass half full or half empty?

Beginning Q3 on something of a high note, it remains to be seen whether the EUR and GBP can sustain their very impressive recent performance. EUR/USD1.2450 still provides an important technical pivot, above which the Single Currency looks well bid on continued short covering, with potential up to the 1.27-1.28 area before its decline then resumes.

* The BNZ research team analyses and reports on financial markets and the New Zealand economy. All its research is available here.