Shamubeel Eaqub says we are failing to grasp the reasons and the outcomes of diverging regional economies
21st Jul 14, 1:31pm
by Guest

You can buy "Growing Apart" using the link at the bottom of this article.

A recent NZIER report with colleague John Stephenson and my book Growing Apart describe large and growing differences across regions.

The purpose is to encourage debate and discussion.

Current strategies of investment attraction and picking winners are not working.

The public and media reaction has ranged from incensed outrage to relief at giving voice to a growing divide. It feels like the balance is about right.

We may be one country, but we are increasingly worlds apart from one another – when we look at the differences in incomes, employment, population and economic performance. Critically, deep-seated economics forces – urbanisation, globalisation, technological change and ageing – will only increase these gaps in the years ahead.

Our economic focus, however, often remains fixed on national issues, with increasingly acute regional differences left under the surface. It is critical to understand and debate the shape and drivers of these forces and what they mean for the changing economic fortunes of New Zealand’s regions, and the country as a whole.

Many provinces are experiencing low economic growth, stagnant or declining populations, concentrations of poverty, low levels of skilled and educated workers, low social mobility and the loss of their youth to major urban centres in New Zealand or abroad. The combined effect of these problems is causing a downward spiral for these provinces that is only likely to accelerate on our present course – some regions now represent a ‘burning platform’, requiring urgent attention.

We need to think differently about different parts of New Zealand. Not all places can succeed on all measures. Local communities need to help themselves.

In areas of growth we need to unshackle potential, because it will be the future engine of growth.  The worst thing we could do is to stifle them in the hope economic prosperity will turn up elsewhere.  It won’t.  If we stifle growth in Auckland, it won’t turn up in Northland – it will turn up in Sydney or Singapore.

For stagnating regions we need to build on their capabilities – help where there is a credible chance that the cost of investments will be more than repaid by future benefits.

Declining regions will present some of the hardest questions of all: Is the decline irreversible and, if it is, do we need a strategy to wind down with dignity and certainty?  A Royal Society report suggested ‘red zoning’ parts of declining regions as a solution. 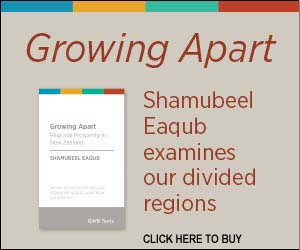 My book and the NZIER report are about much more than that. I write with concern that we are failing grasp the reasons and the outcomes of diverging regional economies. In too many cases they can only be described as a poverty trap.

It is not good enough for New Zealanders to miss out on opportunities because of where they were born. It goes against our culture of ‘fair go’ egalitarian meritocracy.

Nevil Gibson in an NBR editorial wrote “Mr Eaqub’s book is short and snappy – a mere 85 pages – but is a must read for any understanding of the future and the options available.”

Love it or hate it – please join the conversation.

Shamubeel Eaqub (CFA) is a Principal Economist at the New Zealand Institute of Economic Research.

To make it easy to buy this book ($14.99 delivered in NZ), we are making it available online here.

So this problem is not new , our de-industriaisation has been steady for decades and smaller towns have taken the brunt of it.
Nor is the problem ours alone , rural Australian towns have the same problem. Aussie Mining has saved many , but not all .
Our  textile , clothing , tanning , biscuit-making , shoe manufactruing , carpet making and food and meat processing plants are almost non-existent .
These formed the post WW2 rump of the rural town -economy .
In addition , each little town had a small dairy , cheese or butter-making factory , now these are all centralised in highly automated hi- tech facilities .
Its a combination of the emergence of cheap well educated labour in Asia , our historicaly militant and disruptive Trade Unions , the high minimum wage ( by competitor standards) and the advances of technology and communications .
We need to adapt , and recoginise the new norrnal .

Usually, local council and local ppl will have totally different views on things.

To what do you prefer, most of the "turn downs" I seen are only fro mforeign investors who would use their operation as an excuse to define some "specialities" which they just can't get in NZ, and thus bring more of their sychophants and extended families over, with all profits and most of the wages going back to the home country.   No use at all for the community which it is in.

Is there a risk that NZ is shifting from being a developed country to a developing one?

How to prevent it from happening? Is there a simple solution to that?

Let more skilled, and both materially and intellectually rich migrants come in.

What evidence can you provide it would work in the future

actually we'd be much better keeping the materially and intellectually rich migrants OUT!

Allowing only truly useful experts (ie those who can and are willing to teach their skills ... not just make themselves profits on them) and young poor active people willing to adapt to a new community and culture.

Eaqub also co-authored a book on the New Zealand economy which is 180 pages including references. It would be an exageration to call it a pocket guide, more like a summary of what is already in the public domain and avaiable from the Statistics Office. [ This element deleted because it is over the line. Please keep comments within our Policy limits. Ed]

Can smell the "R" word, racism from your comment. Why do we always attack the "Messenger". He won't be in this position if he doesn't know what his talking about!!!!!

That is a false statement.
He is probably in this position because he knows how to agree with his bosses, and people who want to get things.

If he had the first clue about what he was talking about he would not be trying to put young people into small towns without solving small town problems first.

The reason people like him get away with being in positions like that, and why the world is so screwed up is people like yourself, acapulong, who don't bother analysing things for themselves and just assume someone else knows best - and that kind of attitude only helps those incompetent opportunists rise to the top.

The top teachers and schools are all located outside the major cities.  Top talent gets equally rewarded in auckland as in p.n for example, yet housing and everything else is about a third the price.  Grammar is the most over rated school in NZ.  Families are already leaving auckland for a better up bringing in the secondary cities.