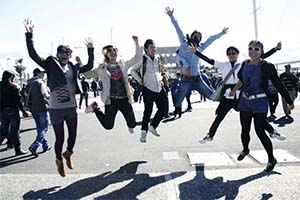 Optimism is also mounting that the expansion will continue as a weaker New Zealand dollar boosts international students’ budgets.

The remainder of this article considers the export education sector’s recent performance in light of New Zealand’s other key exports, before concluding by examining the outlook for export education.

Just how quick is the export education sector growing?

Furthermore, a look at international student visa approvals data for the first six months of 2015 shows that this trend has continued into 2015, with year-to-date visa approvals sitting 10% above their level from a year earlier.

Alongside a significant global digital marketing campaign, a key factor pushing up international student numbers last year was a policy change in December 2013 regarding work regulations for those in New Zealand on student visas.  Formerly, international students had only been allowed to work for a maximum of 20 hours per week, but now students are allowed to work as much as they like during scheduled holidays, while Masters and PhD students will no longer have work limits at all.

The relaxation of these restrictions has brought studying in New Zealand within the budgets of a wider range of international students.

There are many students from emerging nations that need to find supplementary employment while they study to reduce the financial burden they are placing on families back home.  A quick look at the composition of recent growth shows that it was students from emerging nations that fuelled the international education market last year, with enrolments from India and China rising 67% and 12% respectively in 2014.  Together these two nations accounted for 87% of the total increase in international student numbers in New Zealand.

With more than 110,000 international students studying in New Zealand, it will come as no surprise that the export education sector is also a pretty big money earner for the New Zealand economy.  Infometrics Chief Economist Dr Adolf Stroombergen estimated for ENZ that these students spent $2.75 bln in the New Zealand economy during 2014, up 10% since 2012.  The export education sector also generated another $104m in additional services revenue, from things such as the provision of courses to students offshore.

Equally as interesting is that International education exports were more than twice the $1.35 bln earned by the wine industry in 2014!

Furthermore, the strong performances of tourism, export education, and other types of service exports have been key factors preventing New Zealand’s external trade deficit from getting too out of hand over recent quarters.  Balance of Payments data shows that the value of New Zealand’s service exports rose 9.3% over the 12 months to March 2015, which helped offset a 2.5% fall in goods exports as a result of plunging dairy returns.

Fizzing about the outlook

Although many factors affect the decision to study abroad, including visa conditions, safety, education quality, and lifestyle considerations, the costs of study are always a pivotal element in the decision making process. On this basis, the falling New Zealand dollar has made us pretty optimistic about the outlook for the export education sector.

The plunging New Zealand dollar is a shot in the arm for international students’ budgets because it allows them to live more cheaply in New Zealand in foreign currency terms.

For example, in July 2014 when the New Zealand dollar peaked, an international student would have needed US$265 to fund a NZ$300 per week budget, while students now only need around US$195 to maintain the same level of spending in New Zealand dollar terms.

These favourable currency movements, along with Infometrics’ expectation that the New Zealand dollar will ultimately settle at a lower level over the coming years, will continue to raise the appeal of New Zealand as a study abroad destination.  Furthermore, the cost effectiveness of New Zealand relative to other popular English speaking study destinations is rising, with value of the New Zealand dollar having fallen relative to not only the US dollar, but also the Australian, UK, and Canadian currencies as well.

When one stands the weakening New Zealand dollar, alongside better direct air connections to Asia and the government’s recent relaxation of working restrictions for international students, the stars seem aligned for strong growth in international education’s contribution to export earnings over the coming years.

[1] This estimate is slightly greater than the $2.43 bln figure calculated by Statistics NZ for education’s contribution to service exports in the Balance of Payments during 2015.  We prefer to quote the ENZ figure when considering the value of international education exports as the Statistics NZ figure does not include expenditure from students who stay in New Zealand longer than 12 months.

Or is it the weaker NZD will mean less incentive for Indians to come over as 'students' to work a 40-60 hour week to earn NZD to send back home?

Weekly rent for a 1 bed apartment in India could be paid for by $43 NZD last year, now they have to earn $53 NZD. Still less than a days work at min wage though.

What if they are enrolling in cheap courses run out of warehouses in auckland, and are using it as a way to earn NZD? The strong run up in NZD to start of this year corresponds to increased Indian students coming over.

Put it into perspective. What if you could earn a third of the weekly rent in NZ in 1 hour in an overseas country, by doing unskilled, min wage work?

That's like earning $100 NZD per hour working at maccas or something.

And if you needed to enroll in a course to get over this place so you can earn that, then you would.

That's whats happening for mine. Hence weaker NZD will not be a positive for the masses of Indian students coming over. It will be for the genuine students enrolled at universities (ie paying big bucks anyway so need to be well off). But I think a lot of the immigration boom recently has to do with dodgy education providers run on weekends out of warehouses in Auckland.

The list of major exports is missing three of the largest items:

Interesting thought. 1 and 3 are not actually exported however and 2 can come back, however any profit clearly is exported which is probably the important consideration.

1. No idea of numbers though
2. Currently incorrect
3. Wouldn't be an issue if NZers were actually savers, not borrowers, and had a capital markets that could actually fund the grow of NZ owned banks that could in turn fund NZ businesses and households, plus survive a severe downturn - thank God for the Aussies

The education thing is often a rort and farms students with near bogus courses as they struggle to gain a foothold for residency.
Our public owned institutions have lapped this up with a vengence. Just like their behaviour over the 'bums on seats' debacle of just a few years ago.

...its not the education they want, its the entry ticket. Wakey wakey.

Fact is that NZ has no university of high international standing (with Otago and AKL enjoying the best reputations of the lot). So why are international students flocking to NZ? Not for the a quality education at a good price, but as a means of covert immigration for a rip-off price.

Many education establishments outside the traditional universities and schools are btw run by Indians for Indians. Phoney courses at a premium price to enable phoney immigration. But I bet there are also no statistics on that :-)

So, NZ still produces food and thanks to Hobbits and other marketing bs manages to appeal to global infantilism to attract tourists. Other side of the coin is that NZ has this image out there as a place not to be taken seriously. So we are stuck with tourists and cows and sheep and Indian "students" for now.

There is one of those institutions on the corner of Blenheim and Curletts road in Christchurch in the old International Harvestor assembly building. I saw the "students" outside and I thought they must all work there, until I saw the name: Royal College.

It's not a good plan though if they want long term residency as rubbish courses won't get them the required job at one of the selected places required for them to stay on after studies completed.

Unless they are using it as a way into a work visa? In which I believe they will earn some good points going through a NZ education provider, even if only at trade level.

Not sure how long work visas last or what the next step is to move from that into a more perminant status?

That went well Benje. Not.

Many international students have to work to make end s meet. All we're doing is legitimising them to compete with local unemployed and students. To survive financially, they re more prepared to accept rotten pay and conditions. This drives wages and work conditions down further toward third world status. A student-led race to the bottom?

I just endorsed your post MB, but I was struck with the comment that institutions are 'forced' to pass incompetent international students. I am sure this happens but what an awful reflection on the moral state of our public servants and institutions. They should be taken away in handcuffs.