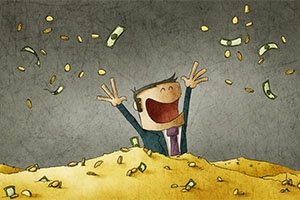 When it comes to economic inequality, most of the discussion focuses on income: how much money people get every year (usually after tax), and how the difference between incomes for rich and poor people has widened in the last 30 years.

But there is another related inequality that is also important, and that is to do with wealth.

As opposed to income, which is an annual flow, wealth is in accumulation, a stock or store – it is, crudely speaking, the total amount of things that someone owns.

Wealth is obviously connected to income (the latter tending to accumulate as the former) but can also be amassed in ways that have little to do with income – through gifts, inheritances, and the returns on wealth, such as interest and dividends.

Wealth always involves ‘assets’, in the sense of items of property that confer some kind of benefit on the owner. But most definitions of wealth include or exclude certain kinds of assets. There is ‘capital’ in the economic sense – the assets (like machinery and factories) used in commercial settings to generate income, as part of a production process.

There is also ‘capital’ as defined in last year’s economic sensation, Thomas Piketty’s Capital in the Twenty-First Century, which argued that, because wealth of any kind seems to generate a return (as defined above) of 4-5 per cent of its value every year, the definition of wealth should be broad and should include things like housing. A third way to define wealth is to look at household wealth – the things that individuals and families own. This tends to focus more on houses, investment properties, furnishings and valuables, cash in the bank, and so on.

Wealth can also be thought of as the balance between incomings and outgoings. Someone who saves part of their income will increase their wealth; someone who spends more than they earn will decrease their wealth (assuming they have any). Wealth also has to be defined against debt, known technically as liabilities. Someone’s true wealth is their net worth – their assets minus their debts.

Whatever the definition – and each of them is important in different contexts – wealth is always tied up with income and opportunity. Owning a house, for instance, allows you to borrow against it when starting up a business, an opportunity seldom open to people with no assets. That business in turn generates income.

Having something stored up in reserve, whether cash in the bank or some kind of asset that can be sold, allows people to plan for the long-term and have a sense of stability.

The sense of having a ‘stake’ in society, especially through homeownership, makes people more likely to get involved in communal activities and build social capital.

This is why wealth inequality matters. Because wealth brings certain advantages, it is significant if some people have large amounts of it while others have nothing.

In particular, because wealth compounds – once amassed, it can generate interest and dividends or increase in value with little or minimal input from its owner – there are concerns that wealth inequality may be particularly unfair, more so than inequality of income that has been directly worked for or earned.

In New Zealand, as in many countries, housing is the most important kind of wealth for individuals and families. The 2001 Household Savings Survey showed that the houses people owned made up 36 per cent of wealth, and that once other kinds of houses (such as rental properties) were included, housing made up 46 per cent of wealth. Farms and business investments were worth a further nine per cent of total wealth each. Housing is relatively evenly distributed, in the sense that many people who are not otherwise wealthy have some kind of stake in their own house. In contrast, other forms of wealth – such as share ownership and stakes in businesses – are heavily concentrated among the wealthiest tenth.

Currently, the most recent publicly available information on wealth inequality in New Zealand comes from the 2004 round of the Survey of Family, Income and Employment, known as Sofie. (The author is working with Statistics New Zealand to produce an analysis of wealth inequality from the 2010 Sofie round. In addition, Statistics New Zealand will report next year on a new survey of wealth done in 2014-15. Both these initiatives will significantly improve our knowledge of recent wealth inequality.) Because wealthy people often refuse to take part in surveys such as Sofie, such data tends to underestimate how much of the pie is owned by the wealthiest people and overstate the share of everyone else. But it is still the best data we have.

What the 2004 Sofie data showed is that the wealthiest one per cent of individuals – just 34,000 people at the time of the survey – had 16 per cent of all the country’s assets.

The wealthiest tenth of individuals (including that wealthiest one per cent) had 52 per cent of all assets. In contrast, the poorest half of the country had just five per cent of all wealth. Some 190,000 people had negative net worth (more debts than assets), owing $4.7 billion between them. These wealth inequality figures have been most strikingly represented in the ‘Wealth-Gap Tower’ by cartoonist Toby Morris, which visualises them using a ten-storey building as a metaphor. Looking at international comparisons, the New Zealand data is roughly the same as for other developed countries – in most places the wealthiest ten percent has half or more of all assets.

New Zealand’s data source for wealthy households is the National Business Review’s annual Rich List survey, which estimates the fortunes of everyone in the country thought to be worth more than $50 million. Currently that draws in 184 families and individuals. The NBR’s methods of valuing fortunes involve a certain amount of guesswork, but such surveys are still used by experts like Thomas Piketty as a guide to top-end wealth holdings.

Since the NBR Rich List began in the mid-1980s, the value of its members has risen (adjusted for inflation) from $12.6 billion in 1986 to $57.4 billion today. Their combined wealth began to rise very sharply in the mid-2000s – about a decade after the sudden increase in income gaps in New Zealand. While further research will be needed to prove the link between these changes, on the surface it lends support to the argument that income inequality filters through into wealth inequality, and that these different kinds of inequality can compound and reinforce each other in concerning ways.

More research is needed on the New Zealand experience of wealth inequality, and how wealth shapes incomes and opportunities. This relationship is one I explore further in my new book, Wealth and New Zealand, to be published by Bridget Williams Books in November.

Max Rashbrooke is the author of 'Wealth and New Zealand', which will be published by Bridget Williams Books (BWB) in November 2015. He edited Inequality: A New Zealand Crisis, published in June 2013, also by BWB. As a journalist, he has written stories for national newspapers and magazines in Britain and New Zealand, including the Guardian, the National Business Review and Metro. He has twice been the recipient of the Bruce Jesson Senior Journalism Award, and was awarded a 2015 Winston Churchill Fellowship. He is also a research associate of the Institute for Governance and Policy studies at Victoria University of Wellington. This article was first published on AUT's Briefing Papers series. It is here with permission.

Time for a comprehensive capital tax.

Perhaps a minimum gdp contribution tax on those who add less than a certain amount to gdp in any given year? That way you catch the rich who hoard and the lazy all at once, while leaving the productive members of society be.

New imports should be set a minimum thresh-hold amount they must achieve in tax-paid earnings in the first 5 years of their residency, if the high-bar is not reached, then they are ineligible to obtain citizenship and have 1 year to settle their affairs up and depart to make room for another import the opportunity to have a go

can't see the point of this article...

How wealthy are you? Check here.
http://www.globalrichlist.com/wealth