Benje Patterson says the regions are in great shape, despite dairy, with resilience built on wide diversification, flexibility & housing affordability

Benje Patterson says the regions are in great shape, despite dairy, with resilience built on wide diversification, flexibility & housing affordability 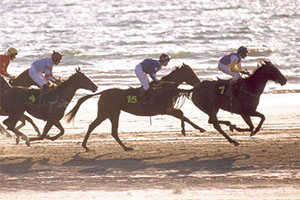 Sob stories of who has it worst in regional New Zealand were a popular topic for melancholic venters over recent years.

But the chorus of complaint has subsided of late as evidence continues to emerge that most of our regions are actually performing pretty well at present.

Despite the sky having fallen in on dairy for now, Infometrics’ latest Quarterly Economic Monitor has shown that our regional economies are far from one trick ponies, with improving fortunes in a number of other sectors propelling economic growth in most places along at healthy rates.

Let’s deal with the good for now, because frankly this article is unashamedly a good news story.  I will deal with the bad briefly later in the article, but as you will see regions in this category are very much in the minority.

The table below identifies the top 15 performing territorial authorities over the year to December 2015 from a GDP growth perspective.  For good measure, Auckland, in place number 16, has been tacked on the end for comparative purposes. 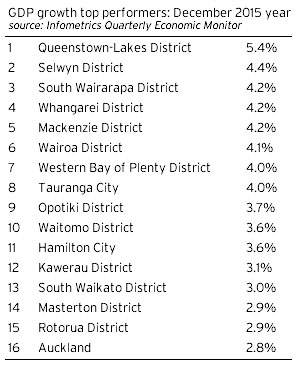 A quick scan through the list shows a couple of the usual regional stars, Queenstown-Lakes and Selwyn, up the top.  But what is more interesting is looking further down the list and seeing the assortment of other top performers that follow.  The majority of these top performers are dominated by urban and provincial territorial authorities in the upper North Island, as well as parts of the Wairarapa, Wairoa in rural Hawke’s Bay and bourgeoning tourism hotspot, Mackenzie District, in the South.

Who would have thought that a year or two ago we would have been labelling places like Kawerau and South Waikato as being “growth hotspots”?

This seemingly random assortment of top performers begs the question of what is really going on in regional New Zealand at present?  After all, with headlines continuing to dwell on dairy’s malaise, it seems pretty strange at first brush that even some key dairying areas in the upper North Island are performing well.

Back in September, I argued that it wouldn’t all be doom and gloom in regional New Zealand over the second half of 2015.  I countered that there were areas with reasons for optimism that “… all have relatively low exposures to dairying and are selling goods and services whose returns have been boosted by the recent sharp falls in the New Zealand dollar”.

As it eventuates, my optimism for regional New Zealand, which was bucking the general sentiment floating around at the time, was still not optimistic enough.  I was correct that other parts of the primary sector would pick up the slack, and that tourism would enjoy a golden summer, but I had underestimated just how strong these trends would be.

The values of pretty much every non-dairy primary sector export, including: honey, fruit, meat, wool, wine, vegetables, fish, and even forestry are back in growth mode, while arrivals of international visitors have accelerated to a double-digit rate of growth.

Furthermore, the spilling over of housing demand from Auckland’s increasingly unaffordable housing market into other parts of the upper North Island, as well as the positive demand stimulus from elevated inbound net international migration have been quite incredible to watch over recent months.

Our forecasting team had been taking into consideration the prospect of a more widespread housing market pick-up.  However, we are still surprised to see just how widespread this growth has been, with house price inflation in pretty much all of the upper North Island running in the 10-25%pa range and house sales rising strongly.  This increased turnover in the housing market and influx of migration is a key factor underpinning demand in upper North Island economies.

With migration inflows showing no signs of abating just yet, Auckland housing still expensive, and low interest rates helping keep the cost of servicing a mortgage at bay, this trend looks set to continue a while yet.

Having now dealt with the positives, I want to now quickly deal with what’s happening at the tail end of regional New Zealand.  The table below identifies a short list of the five territorial authorities that suffered from a recession during 2015.

As would be expected, given such a prolonged and deep downturn in the dairy sector, the majority of these struggling provincial economies are places with high dairy exposures.  The sharp downturn in oil and coal prices has also pulled down mining and exploration activity on the West Coast and in Taranaki.

It is likely that these areas will continue to face challenging times over the next couple of quarters, but there will be a few bright spots for some from parts of the agricultural sector where returns have risen, as well as further growth in tourist flows, particularly in the West Coast and Fiordland in Southland District.

Message of the day

The message that delving behind the numbers in Infometrics’ most recent Quarterly Economic Monitor has taught me is that it is important to not get too caught up in cyclical movements in one sector alone.  Although dairying is a mainstay for many regions, there is much more to regional New Zealand than meets the eye.  Rather than whining at what we don’t have, we should celebrate the success for those doing well.

Much of regional New Zealand is actually in a surprisingly good place at present, with the benefits of diversification in the primary sector showing through in many places.  The willingness of New Zealanders to migrate regionally in search of affordable housing has also helped.  Perhaps the lesson we should be learning from all this is that a diverse and flexible economy is a resilient one.

Past performance is not a predictor of future success .

China was still buying heaps of timber at a premium , and the exports of meat to the EU and elsewhere were good ( the Kiwi was not as strong as it is now ).

The regions growth was also coming off a very low post GFC base , so construction or upgrade of a road through a district will boost local GDP

Our size , flexibility and relative diversification will save us , but I would not be too optimistic just yet .

GDP growth of a region unfortunately doesn't tell a whole story though.

One trick pony? Dairy isn't the only single trick. What does Queenstown have other than Toursism? Tiwai Point in Invercargill? Uni in Dunedin? Parliament in Wellington?Uni in Palmerston. Wine in Hawkes bay/Malborough?

The country as a whole may not be a one trick pony but each province is, and when that trick stops whole sectors crash out of NZ.

Pn has Uni and hub for agriculture of manawatu region, which is crops, beef, lamb, wool, some dairy, grains. Dispite dairy falls p.n gdp still up on last year.

Tourism actually adding a lot to all main centers, pn is a common stop as they explore going down the island.

Your generalisation of the above regions makes me think you're an aucklander... not really in touch.

This is what the actual people in the regions are saying.

Thats a good article SS. Explains how the worst is yet to hit. A lot of sheep and beef farms will be hurt by the dairy downturn. And just as beef is on the cusp of heading possibly in the wrong direction, everyone is heading headlong into it.

Yes Belle, this is a significant downturn from where I sit and I suspect the professional economists are completely underestimating it.

I am not sure how things will pan out SS. There are so many corporate entities in farming these days. I think things will be different to a usual swerve to the downside. The countryside is full of employees rather than owner operators now. Employees will still get paid and they wont hurt personally so a lot of money will still keep circulating. So I am wondering how these corporates are going to make budget. Will they just keep borrowing? What can they cut? Fert, regrassing, maintenance, grazing. I wonder if a lot more of the pain will show up in companies like Farmlands, Wrighties, vets, contractors. From a distance, and I might be wrong, it does seem that the corporates have desk bunnies that make some awful decisions at these times, (usually according to frustrated staff) while ma n pa farmers have a better hands on approach on how to get thru and not jeopardise future production. Interesting times SS.

Indeed Belle. The thing that hasn't been picked up yet is the deferral of maintanence an the huge medium term implications of that. As we sheep farmers know so well you can only shut the chequebook away so long before things turn pear shaped.

Yes and its way worse for dairy farmers. Just redoing raceways is a massive cost. The likes us sheep n beef farmers would go grey over night contemplating. Just a service on one of their big tractors can be 2k or more. I have wondered what sort of time frame these rotaries last. The irrigators. The effluent pond structures pumps etc. The infrastructure required for these industrial sized farms is massive. Even the small farms now are so overcapitalised with pumps and ponds and refrigeration and concrete etc etc...all for one enterprise. Milking cows. Tunnel vision by so many.

And the conversions go on....more trees coming out south of Toke. Some out Piopio way. Some maori blocks in the south island. I guess it will be cheaper to get a contractor at the mo.