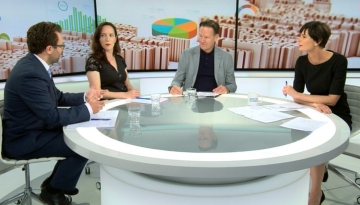 The intergenerational 'Boomers vs Millennials' debate was discussed vigorously on TV3's The Nation Saturday, with a panel of Stephen Franks, Ella Henry, Jessica Palairet and Morgan Godfrey followed by Jonathan Boston on his policy ideas to make government more accountable to future generations.

Interest.co.nz's Alex Tarrant was alongside Jenna Raeburn and Simon Wilson on the programme's panel to discuss their points. Also discussed was the Jacinda Ardern vs Nikki Kaye coverage, John Key and David Cunliffe's decisions to leave Parliament next week, and homosexual law reform.

Stephen Franks was deplorable on the show. If he is anything to go by, it is no wonder millennials despise baby boomers.

From The Landlord Says:

Meanwhile the National Party released its immigration policy. You may wonder what this means for the property market. It is clear from research that immigration is one of the key drivers of house price growth.
The logic is simple. If you import more people into the country, then you need more houses. Supply and demand means that prices are then pushed up, this is particularly so in Auckland.
While the latest immigration numbers show the number of people coming into New Zealand is starting to rise, the Nat’s policy looks like it wants to increase immigration levels even further. (Although it is unclear what sort of number they are targeting.)
This policy is, arguably, a plus for people who want house prices to rise. (But may be not so good for first home owners wanting to buy.)
My guess has always been that property investors lean heavily towards the right rather than the left. (This was made clear in an email newsletter I saw from one developer this week.)

Not one single mention of Foreign buyers of homes. This is the biggest issue. The boomers never contended with foreign buyers The average net salary in NZ is 55K. For anyone who’s been to the auction rooms it’s obvious that foreigners pay upwards of 1.5 million dollars for average kiwi homes in Auckland. That’s 27 times the average salary.

The boomers inherited socialised health care, education, and a production based economy. They also had a global gold based monetary standard back then. What have we got now? A depleted user pays system with a FIRE (finance insurance and real estate) service sector economy, and a debt based monetary system in a terminal death spiral. Worse still, a government making policies that are exacerbating the wealth divides..

You could call it globalization or financialization but the abovementioned transitions are “once only”. We’re not going off the gold standard twice. The potential for wealth accumulation that accrued through those economic transitions will never be available gen X & Y.

Unlike JK, you hit the nail on the head

You are quite wrong on one important point. There was no post war gold standard. let me quote from The Ascent of Money by Niall Ferguson; "Exchange rates would be fixed(Bretton Woods July 1944),as under the gold standard,but now the anchor-the international reserve standard-would be the Dollar rather than gold.

"..and a production based economy."

This might be a bit spurious because that type of economy existed due to a set of circumstances that we don't have today. There is no market standing by to buy everything we produce on profitable terms.

@ Pat, You're absolutely correct to bring up Foreign Buyers who have completely distorted property markets in the larger cities around the globe. The Boomer have so mostly benefited from this huge wave of capital that has washed up in the larger more popular cities such as Auckland.

How on earth can we expect young Kiwi's to complete with such a glut of capital pouring in from else where in the world? We really need a Foreign Buyers Tax, as most the developed Western World has put these in place to protect their larger economies and their people.

We may have a bit of breathing space at the moment with falling house prices, that are obviously resulting from that flow of foreign capital being blocked. But we have no idea how long that will last for?

"These buyers added fuel to the fire created by over enthusiastic domestic buyers with massive mortgages" aided and abetted by government who deny they are a factor.

Yes it's mind boggling just how much impact Foreign Buyers have on global property markets. Though it looks as though most of that has been from one main source in the last few years from credit fulled top end buyers from China.
This recent article highlight quite nicely how much impact there has been on NZ since 2003.
Apparently New Zealanders had the highest rise in prices of the group comparison. The average benchmark home is now NZ$612,527 (US$443,797), a whopping 84% increase. Again, that’s 9 times the median income.

Yes having the actual official figures on any of the housing stas and income would be nice, but fat chance of that happening with this Government.

What a load of Tat, shadow banking and its derivatives are. No wonder houses are so high, borrow to the hilt...from anyone...mug enough. Then disappear without a trace...Russian Jimmied Bonds. Its Irish, but Missed Money-Penny would be the livid.
Then orf to good old New Zealand...the money laundering Housing Capital of the World. You wouldn't write about it.....but true. Money sucks...from suckers..then ends up in NZ...OIO..or not....then it turns up in NZ...clean as a whistle. No regulation, no one to point to the finger...towards out corrupted National institutions and theirs.

What is a few billion between friends...Hardly worth mentioning here....

Particularly liked this snippet.,,nearly collapsed with out a doubt, laughing all the way to the Bank.

“Normally banks aren’t able to issue bonds just days before losing their license,” said Roehmeyer, who helps oversee 12 billion euros at Landesbank Berlin Investment GmbH in the German capital. “The banks in Tatarstan are more or less interwoven with the government of the region, so we expected some form of government support due to this responsibility.”

You know who are the boomers? Big construction companies Fletcher,Good Jay Gardner, Jalcons, Janion and many more who invested in billions of dollars of land bank. They are making money. Plus can't ignore the small players.