Joseph Davis points out that shrinking manufacturing job levels are more about technology than unbalanced trade deals. So protectionism is unlikely to bring a meaningful jobs boost

Joseph Davis points out that shrinking manufacturing job levels are more about technology than unbalanced trade deals. So protectionism is unlikely to bring a meaningful jobs boost 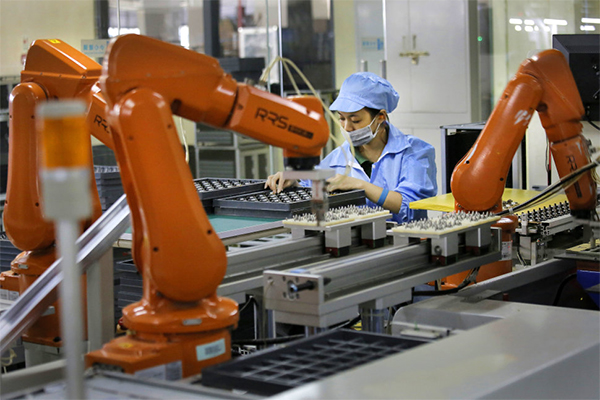 Since 1950, global trade has grown by more than 27 times as a result of open-trade policies and technological change such as declining transportation costs.1

Today, the United States and China top the list of the world’s leading trading nations with about $5 trillion in annual trade, accounting for 30% of the world’s exchange of goods and services.

Free trade, however, has come under scrutiny globally because of significant job losses in certain sectors and increasing economic inequality.

In the United States, much attention has been placed on the country’s growing trade deficit, with a focus on its top three trading partners - China, Mexico, and Canada. The inability, however, of news headlines to convey the complexity of U.S. trade has led to many misconceptions.

Free trade involves a compromise between growth and jobs

Numerous studies have analyzed the advantages and disadvantages of free trade. Some argue that it brings economic growth and prosperity over the long term. One research paper estimates that a 1 percentage point increase in trade flows (imports or exports) leads to a 0.9% increase in income per person.2 On the other side, labor economists focus on the medium-term adjustment costs to free trade in terms of job losses and disruption in certain industries. For instance, one paper shows that free trade with China led to the loss of 985,000 U.S. manufacturing jobs between 1999 and 2011.3

To the credit of free-trade pessimists, it is hard to deny the obvious correlation between U.S. manufacturing job losses and increasing globalization since the 1940s. Manufacturing employment peaked in 1944 at 38% of total U.S. employment; it has since fallen to a low of 8%, while international trade has grown to its highest historical levels (Figure 1a). 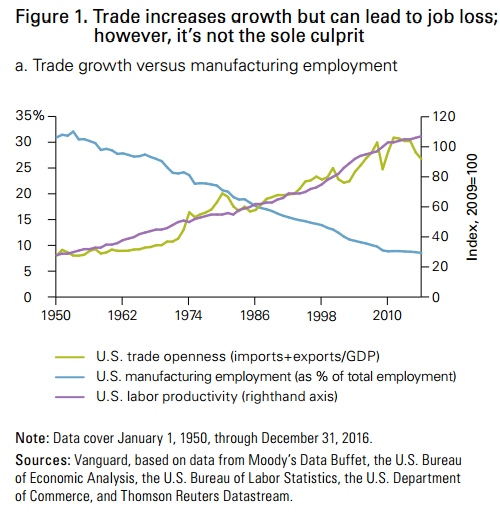 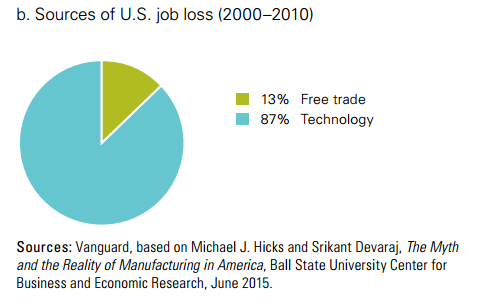 Today, the average autoworker can make 18 cars a day, compared with 13 in 1990. With industrial robotics, machines can perform a large portion of the manufacturing work once done by humans, such as painting auto body parts or welding.

With trade and technology expanding rapidly over the years, the production process for goods has become more global and complex. This has led to distortions in trade accounting and misperceptions about the United States’ bilateral deficits with certain trading partners. For instance, the headline trade deficit with countries that function as global assembly hubs, such as China, may be largely inflated. That’s because a large portion of the value of the goods and services involved corresponds to inputs and parts not originally produced in the trading-partner country.

To illustrate this, try to imagine the journey or supply chain that your iPhone took to reach your hand. Yes, it probably came from China; the United States imports iPhones from China for $179 each, which creates a trade deficit of $179 per phone. But in reality, China adds only $7 of value to the wholesale price of the phone by assembling the foreign parts and components (Figure 2a). Your iPhone traveled to five countries in all and was put together by nine different companies before reaching you. The other countries contributed to the majority of the phone’s value, but they do not appear in the U.S. trade deficit.

As with the iPhone example, U.S. trade balances look quite different if you adjust all trade in goods and services on a value-added basis (Figure 2b). U.S. trade deficits with China and Mexico would decline, whereas the trade deficit with Japan would increase (and the one with Germany would remain essentially unchanged). Although the total size of the deficit would remain the same, the bilateral trade balances would change with the deficits (and surpluses) being redistributed to different partner countries; this makes identifying the size of the United States’ trading partners very challenging.

Looking at trade in value-added terms has several policy implications. First, as protectionist sentiment grows, there is a risk that the United States will target countries based on the size of the trade deficit, which does not accurately reflect true trade imbalances. This is particularly worrisome with regard to Mexico and Canada, where circular trade—in which inputs for goods are shipped abroad, then shipped back as final goods—is prevalent. Second, the interconnectedness of trade would lead protectionist measures to affect not just foreign producers, but domestic producers as well. 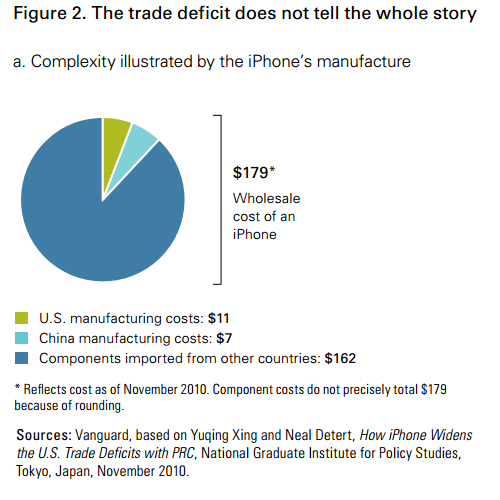 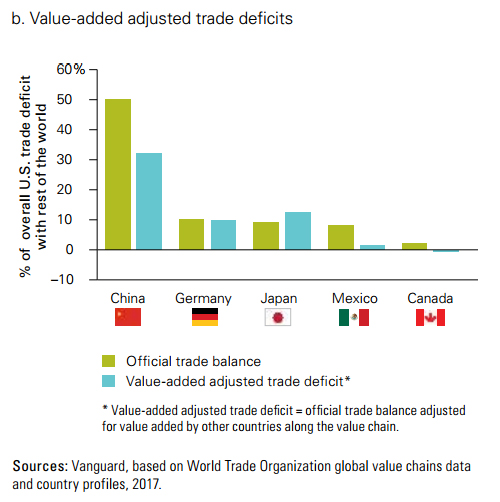 At this point, equity, foreign exchange, and commodity markets do not seem to be pricing in an extreme protectionist environment. But it is worth considering some alternative scenarios, including the less likely and more severe ones such as trade wars and full isolationism (Table 1).

A modest protectionist stance with no retaliation from trading partners could lead to a small uptick in short-term GDP growth. This may seem counterintuitive to the notion that free trade is pro-growth over the long run. However, a closing of the economy would boost domestic investment and import-substitution sectors in the short term. Perhaps another reason for the optimism in the U.S. stock market is this medium-term boost to manufacturing companies, which constitute about 40% of the market’s capitalization. Although mild trade protectionism would act as a shortterm stimulus, it is not necessarily good for the economy over the long run, as GDP would eventually drop because of a lack of foreign competition, a decrease in shared intellectual knowledge, and less foreign investment.

A more substantial protectionist stance would lead to stagflation, with low or negative GDP growth and high inflation. The drop in world demand for U.S. exports following retaliation would create a significant slowdown in the manufacturing sector and the rest of the economy. In addition, escalation to isolationism could lead to a riskoff environment and increased investor risk aversion. Such a shock to financial conditions would push the economy into recession. On the inflation side, a large U.S. import tariff would increase production costs for companies that rely on imported inputs (mostly the service sector and even some manufacturers), leading to cost-push inflation. This would have dramatic repercussions for the Federal Reserve, which would face a policy dilemma, since it would be unable to simultaneously address its dual mandate of achieving stable inflation and ensuring full employment. We do not place a high probability on this scenario, but we believe that the potential for it gets too little attention.

Although these more extreme scenarios are unlikely to play out in full, trade frictions could get worse before they get better. That said, the U.S. economy remains resilient; unemployment is near what it was before the financial crisis, and inflation is headed toward the Fed’s 2% target. But we would advise investors against complacency and urge them to watch for signs of a global escalation of protectionist rhetoric. Portfolio diversification across equities, bonds, and inflation-sensitive assets would be ever more critical under these scenarios.

1. World Trade Organization.
2. Vanguard, based on Jeffrey A. Frankel and David Romer, “Does Trade Cause Growth?”, The American Economic Review 89(3): 379–399, June 1999.
3. Vanguard, based on David H. Autor, David Dorn, and Gordon H. Hanson, “The China Shock: Learning from Labor-Market Adjustment to Large Changes in Trade,” Annual Review of Economics 8: 205–240, October 2016.
4. Productivity is a measure of output per unit of input that includes labor and capital. Productivity increases if fewer people are needed to create the same output.
5. Vanguard, based on Michael J. Hicks and Srikant Devaraj, The Myth and the Reality of Manufacturing in America, Ball State University Center for Business and Economic Research, June 2015.

Joseph Davis is the chief economist of Vanguard Group. This is a re-post of an article that first appeared on the Vanguard website.

Interesting article. it ignores growth in a finite world, but poses even bigger questions that need to be discussed by countries such as NZ. What is the future income picture like? How are Kiwis to be able to ensure job stability and growth and a reasonable living standard?

If we are to establish and maintain some form of manufacturing base that enables the development of sustainable jobs, is some form of Government assistance to be required/ How are we to stop the poaching of these manufacturing jobs by foreign companies, or can we (F&P Whiteware - Haier being one example) ? Are we to be totally dependent on tourism? What then of a global economic crisis, how will we survive?

The article ignores the ownership issue. The situation in New Zealand is that many of the industries go because of who owns them. The cycle commonly is that somebody does very well in manufacturing, the original owners are bought out by a multinational and surprise not, the enterprise relocates offshore about 10 years later. And if the original family or local ownership had persisted, the manufacturing would have persisted here locally as well.
example. Scott Technology - very successful here doing high tech manufacturing in Dunedin. Recently bought by a multi national. How long do we expect it to stay. Escea - also high tech manufacture and still locally owned. But look to the histories of other departed enterprises and you can see what will happen.
It's all very well for an economist to talk of how Iphone is manufactured. Would be better to look at the more relevant example locally.