Barfoot & Thompson says rents on two bedroom properties have increased the most over the last year, while rents on larger homes have been almost flat

Barfoot & Thompson says rents on two bedroom properties have increased the most over the last year, while rents on larger homes have been almost flat 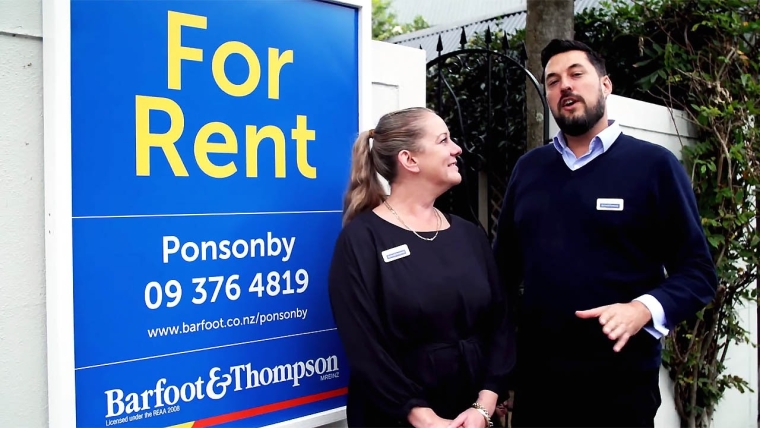 Rents on residential rental properties managed by Barfoot & Thompson have increased by an average $16 a week over the last 12 months.

Barfoot & Thompson is the largest real estate agency in the Auckland region and manages more than 17,000 residential rental properties on behalf of their owners.

The average rent on all of the properties it manages was $579 a week in the third quarter of this year, up 2.95% compared to the same quarter of last year.

It was the second quarter in a row in which the annual increase in average rent was below 3%, compared to annual increases of around 5% that were being achieved last year.

By location, the area with the biggest increase across all property types was central Auckland where the annual increase was 6.15%, while the eastern suburbs posted the lowest increase of 1.92% (see the table below for the full figures).

Barfoot & Thompson Director Kiri Barfoot said the higher rents being achieved by two bedroom properties was being partly driven by the growing number of high end apartments in and around the central city, many of which had two bedrooms, although rental growth for these types of  properties was also slowing, with average rental growth falling from more than 8% in the second quarter of this year to 6.15% in the third quarter.

And rental growth was soft for larger properties.

"On average, weekly rents for homes with four or more bedrooms are hovering around 1% higher year on year, and some will have seen flat or declining [rental] prices," Kiri Barfoot said. 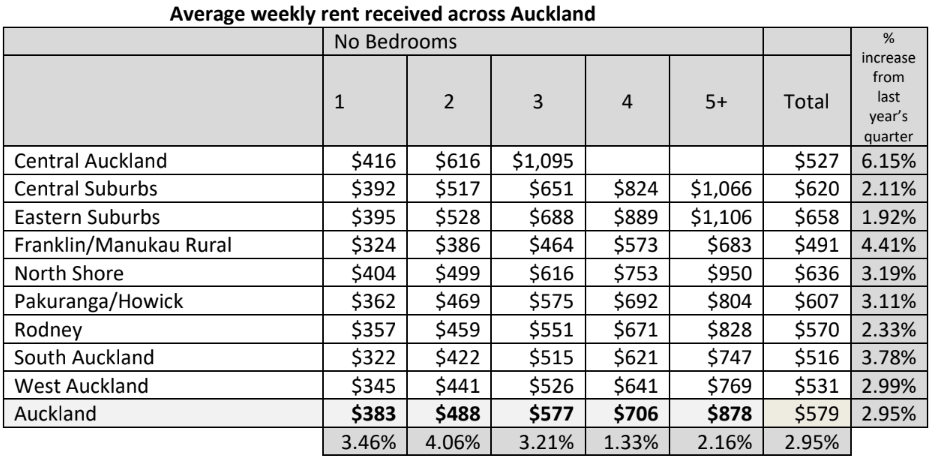 Rising rents are another supporting factor against dropping house values. Not easy on renters though

Rising rents are also an impediment to consumer spending, which filter across the value chain usually in the form of magin squeeze and price discounting. This in itself feeds back into housing costs.

Increased rent payments don't vanish, they are the income of some other person who can then spend it.

Increased rent payments don't vanish, they are the income of some other person who can then spend it

On the contrary, renters (particularly low income) are more likely to spend all h'hold income into the consumer economy. OTOH, landlords have to repay and service debt. If they have no debt, they're also more likely to save. Low-income SECs and h'holds are vital for the health of consumer spending in developed and developing economies. The idea that all consumer spending can be carried by landlords is ludicrous.

So you're saying that those recipients will spend up the shortfall of those who pay more in rent?

I suppose, if the Landlord's grocery bill increases by $16 per week per rental they own then sure.

We spend any extra rental income on property improvements so yea I would agree with that Laminar. In fact we overspend because we started with crap houses and we want to maintain good houses/flats that attract good tenants. Putting in additional equipment and anti-mould paint jobs to meet healthy homes requirements actually dont come cheap and tenants need to be prepared for rising rents but it is a more pleasant environment for tenants to live in

Are you sure about that first statement? Investors have been very quiet lately, and if rents increase FHBs will save less. Which means less saved for that deposit.

I love the logic where increased profit is not met with increased valuation. I bet investors are praying rent stops rising soon?

Lol... you would hate the logic of the stock market then. Actually, most markets.
Be honest... Do you really think everything is so simple as 'increased yield = increased price'?
If something is ridiculously overpriced and demand is falling for it, has a gross yield of 3.5% annually, and said gross yield increases to 3.6%, will that support the price?
Will the Tesla stock price shoot up to $5000 once the company actually manages to make a profit?

Yes I'm quite sure about that statement, when the income of an asset increases, the asset is less likely to decrease

"It was the second quarter in a row in which the annual increase in average rent was below 3%, compared to annual increases of around 5% that were being achieved last year"

so again, all the bickering and scaremongering that rents will hit the roof, is all in vein...

after expenses, rents are going no where..

What do you mean "after expenses"? Do you mean after inflation?

Rents are increasing in both real and nominal terms, so I don't know how you can claim that rents are going nowhere.

we all know, that every house needs maintenance, esp rentals.. if that is not expenses, what would you call that?

if rents were static, then we all know that in reality, the landlord will end up paying for any work that may arise..

to add to that, there is no ring fencing...

Are you saying that the rent tenants pay is static ("going nowhere") because of maintenance expenses paid by the landlord? I honestly have no idea what you are getting at...

i spoke from the perspective of a landlord.. esp with the healthy homes coming into effect and landlords stating that rents will hit the roof as a consequence... so after all that, all im is that, the rise is not as dramatic as was broadcast....

He's been pretty clear, after the rising costs of owning rentals is accounted for, the net profit may be about static. In specific terms, landlords have failed to pass on 100% of the drop in profitability caused by ring-fencing and healthy homes. He's probably correct in that sense, but he forgets the rent increase will keep rolling through the door, year on year. The value over 30 years of the income stream (taxed, invested and investment income taxed) is about 3-4 times the value of the cash (invested and investment income taxed). So after discounting the income stream to present value the landlord is way ahead of his increased costs.

In that case you’re much better at reading between the lines than I am, so good on you.

The point he was trying to make would’ve been clear if he’d said “after the rising costs of owning rentals is accounted for, the net profit may be about static.” Instead he just said “after expenses, rents are going no where”. No clarification that by “expenses”he is referring to the landlord’s expenses, and that by “rents” he is referring to the landlord’s profit from rental income.

Right. Rates, maintenance costs, house insurance - all up in double-digits over the past 2-3 years. Much of the annual rent increases could just be landlord passing these expenses on to their tenants.

biggest expense is interest on mortgage and this is going down. so should rents.

Where did you get your stats about rates, maintenance and insurance? I don't know what the rates of inflation for these things are. I think that in addition to these increasing costs being passed on, letting fees, healthy homes and ring-fencing will be passed on in time.

Rent per head getting cheaper. Plenty of rentals have 4-6 cars on the road and or lawn. That's likely 6 wage earners.

Of course the consequence will be a drop in local breeding by those responsible enough to work, an increase in breeding by those who need a kiddie or three to get a free house...... leading to a need to import more working units to replace those who would normally be bred by those renting productive human's.

Fairly minor increases. Don't back up the fear-mongering.
As we have seen with the massive shift down (77K) in Auckland's population, demand forces are not anywhere near as strong as was previously thought by some.
The surge in apartments and townhouses being built in 2019 will further reduce pressures.

yup, the recent spike in building consents will start to hit the market early in the new year..

Aucklands population grew by 24k year ending June 2019, where as 10500 dwellings were completed.. so number of dwelling are already ahead of population growth..

all the recent changes to enable faster consenting/building will see a surge of properties hitting the market...

I am surprised at how reasonable the rents seem to be in Auckland, when compared to the value of the property!
You would be needing to buy extremely well to make it worth the effort Investing with the cost of rates and insurance and maintenance.
You would also need to be pretty selective and careful with your tenants as you wouldn’t want to be propping up a mortgage and having terrible tenants.

You hit the nail on the head.
Lucky to get gross yields of more than 4.5- 5% in Auckland right now on townhouses /apartments, which typically see less capital gain.
Conversely, you will struggle to get yields of more than 3.5% gross on detached houses, although there is obviously more potential upside with capital gain.
But some still think buying today in Auckland is a good investment....

Buy in CHCH, rent it out to a bunch of people with shaved haircut, wait for a short while and then then you can buy the neighbouring properties very very cheap! The same method can work in Auckland too..

Chairman, geez you must have had some real bad experiences to waffle on about skinheads in ChCh.
Honestly, I have not seen any skinheads in ChCh for over 10 years, so you are clearly delusional.
No we wouldn’t rent anything to people that we didn’t want, we thoroughly checkout every single tenant and that works for us.
We have only once been to the tenancy tribunal to claim money and of course we won and they are paying it off.
That was due to the couple splitting.

Yea but you could make an exception The Man and take on untouchables in a street that you're targeting for undervalued homes :) Moa's (tongue in cheek) ideas will pay BIG dividends when the good neighbouring homes are sold off cheaply by neighbours desperate to vacate the suburb. You won't have any competition from competing buyers.
PS it's a tongue in cheek comment people, not meant to be taken seriously ... or is it??