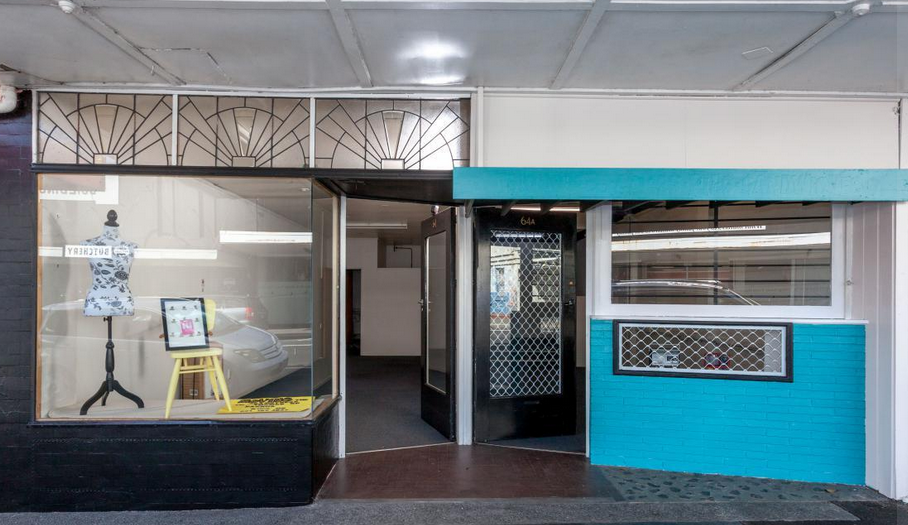 These two vacant retail shops in Paeroa, with a single residential flat and reasonably sized yard at the rear, sold for $330,000.

It wasn't a big auction, with six properties on the Order of Sale with five of those retail premises.

One sold prior to auction - a 108 square metre shop leased to an established hairdressing business in a retail strip at Albany on the North Shore.

Another retail unit that was about the same size at Westgate, which was also leased to a hairdresser, sold under the hammer for $1.03 million, giving a net yield of 5.01%.

The most spirited bidding of the day was for a large, 743 square metre, first floor premises in the Eden Quarter shopping strip on Dominion Road.

Most of the space was leased to a restaurant operator with a chiropractic clinic taking the balance and the property came with 38 designated car parks.

Bidding opened at $2.2 million and it soon developed in a duel between two keen buyers until bids were increasing by just one or two thousand dollars before it sold under the hammer for $3.313 million.

Other properties which caught our eye among the sales just reported by Bayleys were a vacant retail premises in Paeroa spilt into two shops with a flat and yard at the rear. It sold for $330,000 including GST, a large retail premises in Putaruru  leased to rural supplies company Farmlands, that sold for $2.8 million giving a net yield of 5.89%, and a light industrial/office unit at Kaiwharawhara in Wellington that sold for $850,000, achieving a net yield of 5.96%.

Full details including photographs of these and other recent commercial properties sold, are available on our Commercial Property Sales page.

Under the current economic conditions small retail properties must be very high risk. Yield on an empty shop is 0% and expenses - like rates - kick in.
Residential looks a little less risky.

According to most pundits and the NZ media, residential property (in NZ of course) is being implicitly pumped as the best investment on the planet.

So how can it be a "little less" risky?

Return on investment is very good as long as one is able to get a tenanent but if one losses a genanent than need deep pockets unless is mortage free.

ROI is also very much dependent on income in the monopoly game. You're never going to read about how to formulate income projections in Granny Herald. All you will get is the glossy pictures and how much a house sold for. People suck this stuff up and it's as shallow as the Kardashian troupe.

Some idiots made some very poor financial decisions, that is not even news these days, they will regret buying at the peak of the bubble. What would be really interesting is to analyze why banks keep giving loans to buy property these days when it is such an overpriced asset.

Why do they keep lending? Because it's approx 70% of their business. They cannot grow any other way. Furthermore, if they constrain their lending, it puts all their other 'assets' (mortgage debt) at risk as market action slows down. I think more people need to understand the extent to which the banks' ability to 'lend into existence' puts their own borrowing / wellbeing at risk. The banks / ruling elite still seem confident (on the surface anyway) that the magic money tree will continue to bear fruit.

And that's why house price don't go down..

Yes. That is how credit-driven bubbles work...until they don't.

The point really is why would they be giving mortgages which are without a doubt a risk for their shareholders. Unless they are 100% confident they will get bailed out when things turn to custard it would make no sense, but they probably know more than we do.

they will regret buying at the peak of the bubble.

You would have said this last year and the year before too, no?

Everyone will regret the bubble, not just marginal buyers

Of course people will regret buying "at the peak" of the bubble. But is this the peak? Is it even a bubble? It seems to me the "great reset" was stymied by the lowering of the interest rates. In a way this was a type of reset in itself. House yields and capital gain was getting a bit shabby so just reset the interest rates increasing rental income as well as juicing the housing market.

Grant Robertson said on Q&A today house prices would continue to increase, he didn’t seem too bothered by it either.

Grant Robertson will say whatever based on his limited understanding of the future, both near- and long-term.

It seems to me the "great reset" was stymied by the lowering of the interest rates.

Yes, but that's very lazy thinking to believe that property prices can be controlled simply by adjusting a single variable (interest rates). And of course, it's little more than a pipe dream to believe it. The future reality has barely begun.

Can you give us an outline of this future reality? I thought I had prepared well for the apocalypse, was feeling a little smug even, but now I just feel foolish so you wont get negative feedback from me if you elucidate your vision a little more.

No. I cannot define the future reality for you. What I can do is suggest that it will not be what you expect or want it to be (status quoism).