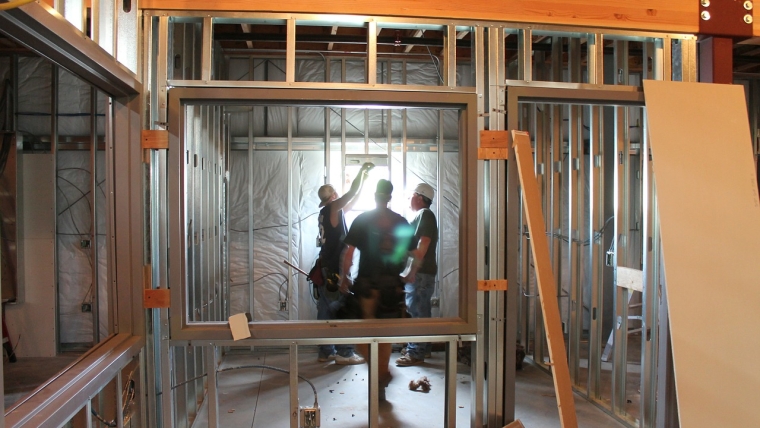 Note: The Code Compliance Certificate (CCC) numbers for July and August used in this story are incorrect. Auckland Council issued incorrect CCC data for those two months and has since corrected the error. The Council's revised CCC figures are 1884 for July and 1574 for August. Refer to the article on the third quarter CCC figures for an update with the revised figures.

The number of new homes being completed in Auckland dropped sharply over July and August, the latest months for which figures are available.

Figures from Auckland Council show Code Compliance Certificates (CCCs) were issued for 656 new dwellings in August, which was down by 47% compared to the 1244 CCCs issued in August last year.

CCCs are issued by council's when a building is completed, unlike building consents, which are usually issued before construction gets underway.

August was the second month in a row that the number of CCCs issued in Auckland was down significantly on the same month of last year.

There were 697 CCCs issued in July, down 38% compared to July last year.

However, the CCC figures have been volatile since April, dropping from 1344 in March to 910 in April and 691 in May, following the Level 4 lockdown restrictions, then spiking back up 1371 in June (the graph below plots the monthly trend since August last year).

And it would only take a few big apartment projects to be completed in a single month to push the figures back up again.

But at this stage, it appears the number of new homes being completed in Auckland is starting to ease back from the highs that were being achieved last year and at the beginning of this year. This is not going to help prices being reigned in, luckily Labour are building 100'000 affordable homes!

Also not going to help those who rely on housing construction for a crust at a time when they probably need it.

Record high new builds did nothing, record low immigration did nothing either... I don't think fundamentals like that matter anymore. It's all about how deep the RBNZ's pocket is.

Exactly. It's almost all about cheap and freely available debt. When it's like that, demand is insatiable and almost infinite, anything short of HUGE volumes of new house building will make little difference.

We would be building right now ..... if we could get the consents without massive delays for planning, you have to be determined as well as have some bucks you don't mind throwing at the problem. And not everyone is prepared for that.. My sincere message to govt, pull out the stops, remove the roadblocks and watch the construction activity flourish. Hey Presto housing crisis fixed and minimized. The amendments to schedule 1 (exempt building) is having immediate effect, its started a surge and why not I ask.

Oh damn, we are minting fewer poker chips to gamble with!

I think you got that wrong, the poker chips are not the houses, it's the ever increasing and cheaper credit that are the chips, and there are ever more of them to compete for a limited number of houses

Exactly right.
You do seem quite happy about that, which I do find a bit distasteful. But you are entitled to your value system.
This isn't going to be good for society, I can tell you that with great confidence.

And your great confidence is based on what experience oh mighty and knowledgeable sage??

Common sense, a good understanding of economics, and a bit of intelligence of which I have plenty.
So tell me, you think another housing boom is, overall, good for society? And if so, why?
It means many FHBs will have horrible debt, and many aspiring FHBs will be shut out completely. There's plenty of good research on the benefits for society of good rates of home ownership.
Inequality is likely to widen, which generally isn't good for society either. Typically it means family breakdowns increase, as does crime.

And it's bad for the economy - or at least those parts of the economy that are not wedded to speculative housing bubbles.

Your turn now - why is this not bad for society?

Fritz, your obsession with forcing your opinion of good/bad right/wrong onto other people is clouding your view of how things are. Don't you realise what is good for one person might be bad for another? What one considers right, another sees as wrong. You seem to believe that you know better than others what is right or wrong, good or bad. That's presumptuous and narrow minded

No you are wrong, and simple minded.
I am talking about wider society or the greater good. Do you actually understand that concept? It seems not.
Obviously people can benefit from outcomes that are clearly working against the greater good. That's what's happening now. A significant number of investors are benefitting, but that's running against the greater good. I never said people aren't benefitting from this housing nonsense - I am one of them.
But there's not really much point debating it with you. You are a self interested capitalist, I am a public interest quasi socialist. Our views are miles apart.

Oh yes I know you said you bought a house off the plan and thats wonderful because whilst you're benefitting through home ownership, so are others such as the construction workers etc. Those playing the property game really are advancing the greater good

Dead right, and it is hardly like you need to predict this

Fritz, my comment was very factual, you are the one who tries to interpret it in value terms like good/bad, distasteful etc... I like to deal with what is without subjective qualificatives such as right or wrong, good or bad etc

Based on the way you have gloated many times in the past at rising prices.

And now you are being disingenuous.

The lockdowns over the last 4-6 months haven't helped completions. Having said that, there still seems to have been a slowdown.
But construction usually ticks up when prices are rising firmly, so I think we will see the stats tick up again.

Investor borrowing up 135% on this time last year.
They are buying around 7000 pa out of the 24,500 selling in Auckland, on most recent YoY sales.
So, we are building stuff for landlords to buy and make money out fo renting whilst driving up prices so that those who would like to be a FHB cannot afford it, as investors are paying silly money at auctions and outbidding them.
Well done Mr Orr. Over-did the stimulus. Over estimated effect of Cv19, impact of which will not occur until rest of world impacts us, in summer.

We bought at auction recently and it did not have any effect on potential fhb who would have liked to buy as the property is multi unit. I have spoken to twyford about changing the rules on multi unit to open them up to fhb by freeing up subdivision rules. Needless to say but he showed no interest. Oh well it allows the investors to pick up the huge gains, no worries.

I suspect that when a new apartment building gets CCC approval then every individual apartment is counted? If this is the case then fewer city apartments getting approval skews the whole picture. Many will look at the stats and think fewer houses are being built when in fact the exact opposite may well be true.