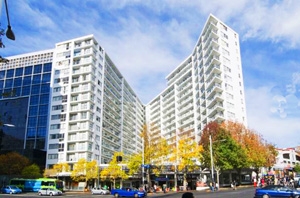 Auckland's investment apartment market could be at a turning point as a gulf develops between vendors' expectations and the prices investors are prepared to pay.

At this week's auction by apartment specialists City Sales, eight apartment were on the block, two of them of a size and type that could appeal to owner-occupiers while the other six were all solid investment material - smaller apartments dotted around the CBD.

The auction got off to a promising start as the first unit on offer was sold under the hammer, but that was it.

The mood in the room became more subdued as all seven of the following apartments were passed as potential buyers resolutely refused to bid prices above their reserves.

And in spite of the jawboning that went on as agents sought instructions from their vendors when bidding stalled, there were still no further sales.

City Sales director Martin Dunn believes the market could be at a turning point.

Like the rest of the housing market, Auckland apartment prices have made some strong gains over the last couple of years, he said.

But there were signs that vendors expectations were getting beyond what buyers were prepared to pay.

It had become increasingly common over the last few months for a vendor to get a market appraisal on their property and then turn around to their agent and say they thought it was worth more, Dunn said.

Unfortunately just demanding a higher price doesn't mean you will get it, as this week's auction showed.

It was a classic case of the rock of vendor expectations coming up against the hard place of what investors were prepared to pay.

And vendors are becoming more cautious.

"Buyers are getting back to the fundamentals," Dunn said.

They may have been prepared to pay higher prices and accept lower yields when prices were rising strongly, because they could trade off lower rentals returns with a rise in their equity.

But there was a sense in the market that prices were flattening out, higher interest rates and other expenses such as council rates were hitting their cash flows, and those that had been hoping for a big surge in rents had been disappointed.

So while there were investors out there prepared to buy, they were being more cautious now and wanted something with an attractive yield.

"Investors are getting wary. I think the world is going to start getting more pragmatic," Dunn said.

And this week's auction proved that if investors are prepared to stand their ground, they will eventually find something that fits the bill.

The apartment that sold was a two bedroom unit on the Volt complex on the corner of Queen St and Mayoral Drive in the CBD.

Space in the unit would be so tight it would squeak, with two bedrooms shoehorned into just 40 square metres,  but it was in a great location in the heart of everything and on the edge of the university precinct.

But the vendor had to bite the bullet.

But, shurely, I thought farrowing crates were about to be Banned.

Where's SAFE when ya need 'em?

I have a friend in commercial property, he tells me the market in places like Palmerston North has collapsed, well collapased could be to strong a wording, lets say corrected. Empty buildings in Palmerston North are selling for  1/3 of GV, thats got to be a bargin for you property investors?

One of the Simon's thinks PN is the next big thing, Im sure he'll bye, 1/3rd price is a bargin!

not until cost of business goes down.  Investment return needs to be higher than borrowing, business borrowing is couple percent or more over mortgage rates, so 10% minimum net profit after taxes etc...   Leave it to the big box importers, they're the only ones competing in the public market.  Service business are doing ok, but how many hospo places do you need at those prices?  And anyone interested in industry or logistics is better with a short&fast haul to international airport.  Even education can be by-the-web so university towns aren't as solid as they were.

Massey Uni in Albany is growing faster than Massey Palmerston.

Another head office will soon be in Auckland.

Every university and polytechnic has campuses in Auckland now - the only place with growth!

Of course it's the only place with growth,  with foreigners pumping in cash for houses, and funded up immigrants moving in.

the rest of us get hit with the outfall from Aucklands inflation instead.

I could be wrong but I'm thinking the APT tax system solves many issues.....like those mentioned above as all the activity is captured.

Not into commercial, don't understand the tenants well enough.. And they don't get free money from the govt as being a commercial tenant is not seen as a right as shelter over ones head is. And govt arent building any more state houses, actually knocking them down in pn.

Govt departments had been moving into palmy, prob will continue to do so in a few more years if labour ever get back in, but possible some over shoot had occurred that's being unwound under this nat govt.

The GFC occurred because the voices of commonsense were drowned out by the spruikers , the rah-rah-rah crowd ...

... the Gummster is glad that there's the Gregs and Shamubeels around to remind us to sober up , and check if these investments really stack up on a sustainable long term basis ..

I reckon there will be a pull back....could be around $50 to $100K and interest rates will possibly hit the 8% mark during 2015 maybe nearer the end of the year.  I'm also thinking there'll be a few more mortgagee sales......

Certainly people will be hoping that it is 2017 and you could well be correct......those who fixed early and for only 2 years will be rolling over at the end of 2015 so could well be the first to be captured with the higher rates......I'm touching my nose with my finger here KImy......and pulling my ear with the other hand.......there could well be some truth in here.......of course one has to watch other issues and how they play out.

well if some of those farmers are "happy" with 2% return after 30yrs, then property will still remain king in NZ

How has the NZX and expecially tech stocks performed in the last few months? Remind me how big the Xero fall haz been, so far.. .

... yes , exactly right ... and I think that is the point Greg / Shamumbeel / Bernard have been making about the property market in NZ ... if it's not at the exact top , it seems to be fairly close to it ...

From this point onwards remember the four most dangerous words in the investment lexicon : " This time is different ! "

... I cut Graeme Wheeler a little slack ... the guy is the meat in the middle of the pannini ..

The Govermint and Local Councils have screwed up , big time ... they've stuffed imports of better and cheaper building materials / they've denied developers access to cheap land for property developmints / and they've added a beauraucratic " fee feast " onto anything that attempts to moove ....

... Grazza is attempting to push the bovine faecal material uphill with an OCR spatula ...

We're heading for the Rocks , not starring in the new version of Economics 101 .... we've crapped our freshwaterways ... built an economy based on two things ... dirty dairying , and tax evasion via property investment ....

Cheer up Gummy pretty much everywhere has some sort of structural/institutional problem. We are not uniquely stupid.

The UK has a 'morally dirty' finance industry and a boom bust property cycle. Starting to boom after a bust.

Coastal US hasn't learnt anything about unsustainable property cycles and is starting to boom after the bust that caused the GFC.

The EU is in a funk due to the Euro experiment being a disaster and China is possibly going to have the biggest property bust of them all.

The good thing about NZ is that we are small enough and have a history of going through with needed reforms that we might be the place that actually does something to get out of the mess.....

Haha, well played Gummy! No need to mention the $40 to $24 drop in Xero stock recently.

I've got no problem with shares I've held HNZ and FPH recently and they've done OK. I completely totally and utterly missed the Xero bus, I remember when it was $7 and I said "it's peaked, can't possibly go higher!". I guess that's a good message for today, be careful declaring something has peaked, we all remember Bernards Auckland house sale a few years back after declaring there's going to be a 40% fall. Well...

No problem there ... grazing in the same pasture as 90 % of the other KiwiSaver fundmismanagers ..

more sustainable than many others.

According to the latest REINZ/Fairfax Media Property Market Report, in Auckland - the most significant apartment market - the median apartment price rose 27 per cent to $389,000 between April and June, compared to the same period last year."