Andrew Krukziener, Bruce Sheppard and the plans for the country's tallest office building

Andrew Krukziener, Bruce Sheppard and the plans for the country's tallest office building 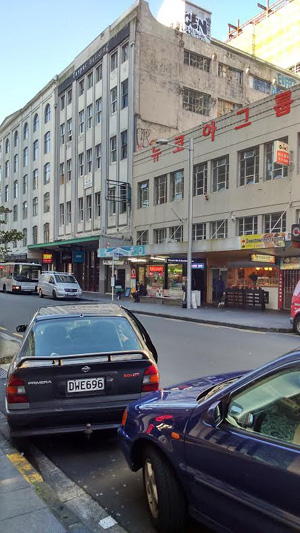 The three buildings involved in the deal: Achilles House, which is contributing its air rights, on the far left, 10 Commerce St (centre) and and fire damaged 12 Commerce St (on the right).

News over the weekend that there were plans to build the country's tallest skyscraper on Commerce St in downtown Auckland caught the property market unawares.

But it turns out the plans are little more than concepts developed as part of a marketing plan for a couple of run down buildings on the edge of Auckland's red light precinct.

The plans for the 48 storey, 170 metre high tower were released as part of a marketing promotion by Bayleys Real Estate to sell two properties located at 10 and 12 Commerce St (article continues after advertisement).

The graffiti scrawled, seven storey building at 10 Commerce St is owned by a company which is ultimately half owned by Gitta Saidi, the wife of well known property developer Andrew Krukziener who was discharged from bankruptcy in December last year.

The building at 12 Commerce St is owned by one of the private property syndicates put together for eligible investors by Gilligan Sheppard, the accounting firm run by former investor activist Bruce Sheppard and fellow accountant Greg Rathbun.

The syndicate originally bought the freehold land at 12 Commerce St when the low rise building on it was separately owned on a leasehold title.

It is understood the syndicate bought the land as a long term hold, essentially to landbank it, but with the intention of also acquiring the leasehold interest if it became available.

That happened sooner than expected after the building caught fire and the syndicate was able to buy the leasehold interest when it was put up for mortgagee sale.

However the extent of fire damage meant it was uneconomic to refurbish the building and the syndicate did not see itself as a developer, so decided to sell.

As it happened, Saidi was also looking to sell the adjacent building at number 10 and another company with links to Krukziener was managing number 12 on the syndicate's behalf.

Saidi is also ultimately the majority owner of Achilles House at 8 Commerce St, which is a historic trophy property which fronts on to Customs St that was extensively refurbished by Krukziener prior to his bankruptcy.

Saidi is fortunate in being able to call on her husband for advice regarding her property investments and a deal was stitched together to sell number 10 and number 12 together as a single lot, although they are separately owned.

Both properties were seen as redevelopment prospects and selling them as a single lot would appeal to developers wanting a bigger site, which would potentially increase their overall value.

To sweeten the deal the air rights above Achilles house, which backs on to number 10, were included in the offer, which would protect the harbour views of the north facing side of the property from being built out (provided the council doesn't alter height restrictions on the Britomart buildings which the a new tower built on the site would overlook).

A source involved in the negotiations that put the deal together said the hardest part was agreeing on a formula to split the proceeds of a sale.

Once that was done it was decided to commission a set of "plans" (see picture below) for the combined site that "would demonstrate what it is capable of," the source said. 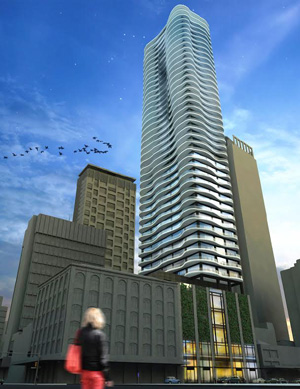 This was seen as part of a marketing exercise rather than an intention by the owners to implement the plans themselves.

However ensuring the plans depicted what would have been New Zealand's tallest office tower meant they got plenty of free publicity from the weekend headlines.

But what ultimately gets built on the site is anyone's guess.

There has been a reliable indicator for the top of each global real estate cycle.....  and That has been the completeion of the worlds tallest building...  ( I think the last one was in Dubai...completed in  Oct 2009 )

Maybe the completion of  NZs tallest office tower will mark the top of our real estate cycle..????

I shall watch with interest...