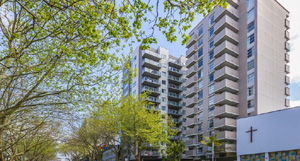 There was a mix of owner-occupied and investment units up for sale at Ray White City Apartments latest auction, with two selling under the hammer and two being passed in for sale by negotiation.

The two that sold both achieved reasonable price gains for their vendors.

The full results are below.

12a Couldry St, Eden Terrace. A 134sq m apartment spread over three levels, with three bedrooms and a double garage, this presented a good alternative to a suburban house. Located within easy walking distance of Queen St in one direction and Eden Park in the other and across the road from Basque Park, which provided a pleasant outlook and a large open space for kids to run around. There were several bidders for this property and it sold under the hammer for $550,000. Rates were $1794 and body corporate levy $2352. According to QV.co.nz it was originally purchased for $377,000 in 2007.

2a/109 Vincent St. Rodney Apartments. A 36sq m studio with a reasonably sized balcony providing a user friendly outdoor space. It was sold fully furnished and attracted competitive bidding before selling under the hammer for $175,000. It was rented at $310 a week, fixed until July 2015, providing a gross rental yield of 9.2%. Rates were $781 and body corporate levy $2873. According to QV.co.nz it was originally purchased for $125,000 in 2003.

4f/41 Albert St. Prince Albert building. A 171sq m penthouse on two levels on top of a mid-rise block across the square from St Patrick's Cathedral. With two bedrooms plus study/single bedroom, two bathrooms plus powder room, wrap around decks and westerly views over the Cathedral and square, this also provided an attractive alternative to a suburban house. The auctioneer said there was good interest in the property from conditional buyers but it appeared none was in a position to make an unconditional bid at auction and it was passed in for sale by negotiation.