Westpac's Imre Speizer shows why our bank bill rates have started to rise, sees the impact as 'modest' so far, but cautions on further upside potential and what is driving that

Westpac's Imre Speizer shows why our bank bill rates have started to rise, sees the impact as 'modest' so far, but cautions on further upside potential and what is driving that
11th Apr 18, 10:10am
by Guest 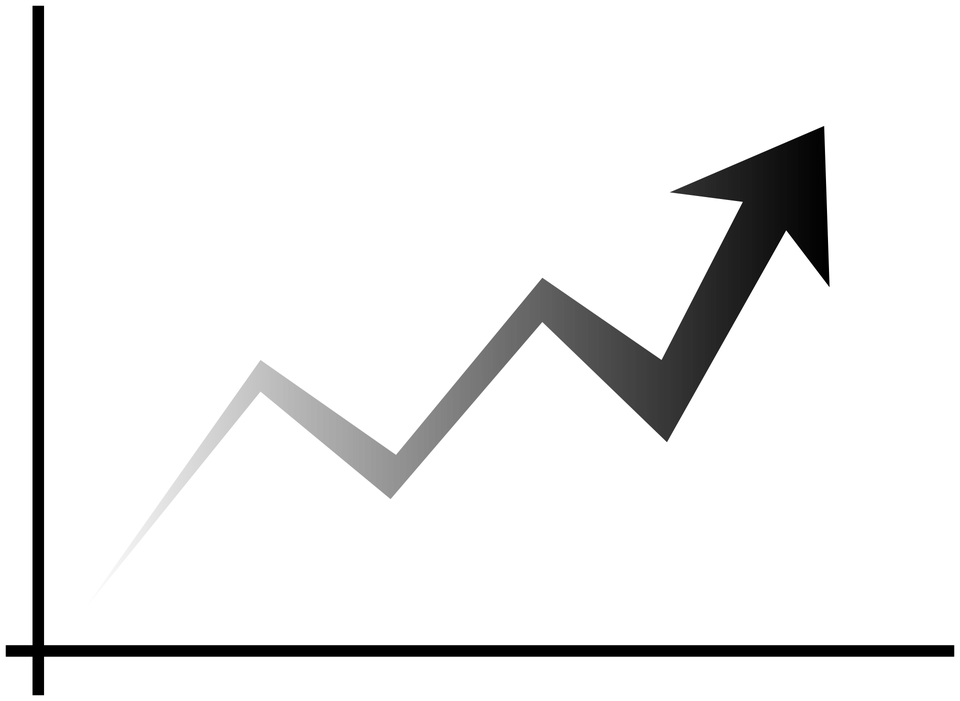 The spread between NZD bank bill rates and OCR expectations has risen slightly during the past few months, probably due to the large rise seen in the USD equivalent.

NZ bank bill rates have risen since mid-December, the 3mth bank bill-OIS (BB-OIS) up from 10bp to 22bp. This rise is small but unusual, given the RBNZ is expected to remain on hold for some time - OIS rates are not fully pricing a hike until June 2019 (Chart 1). 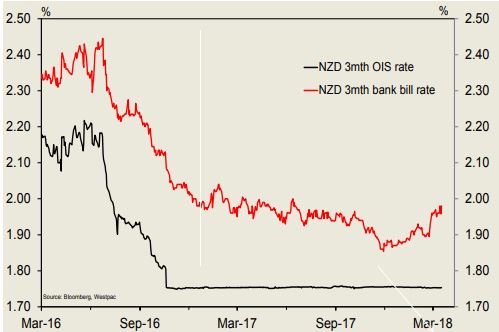 The rise seems to be related to the large jump in USD LIBOR (Chart 2). We wrote briefly about this in February and March (“AU & NZ Rates Weekly” 26 Feb; “Chart focus: Will NZ funding spreads follow the US?”, 9 Mar), but given the phenomenon has intensified, it’s worth revisiting it in a bit more detail.

We do note that so far there is no obvious evidence of a global systemic funding problem. The jump in LIBOR-OIS spreads appears to be contained to the USD and AUD markets; with EUR, GBP, JPY and CAD LIBOR-OIS spreads little changed, and NZD markets only modestly affected (Chart 2). 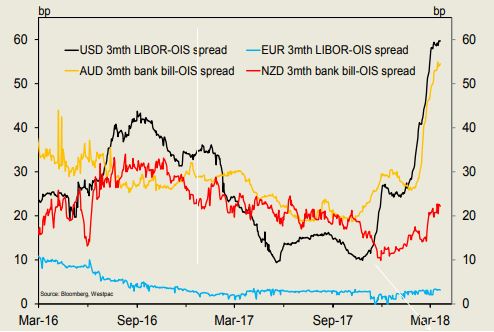 There doesn’t appear to be a shortage of cash in the NZ financial system. For example, RBNZ settlement cash balances have been above average over the past six months (Chart 3).

Chart 3 - No shortage of cash evident in NZ system 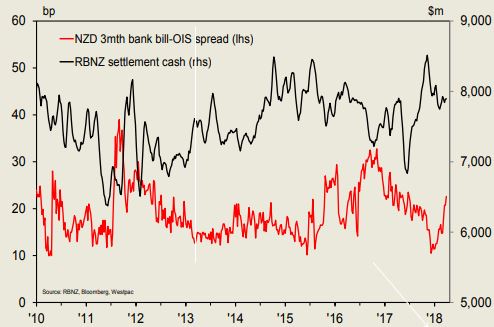 Why is USD LIBOR rising?

There is no consensus among analysts regarding the dominant cause of the rise, but the most frequently cited contributors are:

• UK authorities have proposed the discontinuation of LIBOR as a short-maturity interest rate benchmark from 2021, while the Federal Reserve has promoted the use of alternative benchmarks from 2018 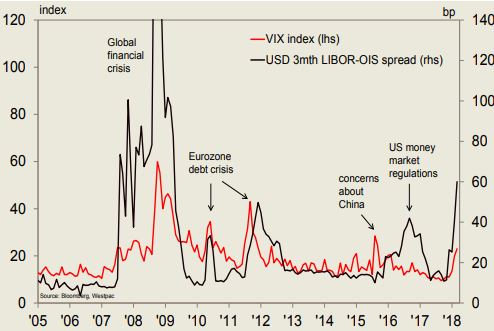 Many of the above explanations would argue the spike in LIBOR spreads should be a short-term phenomenon. However there are more enduring factors, such as the Fed’s balance sheet reduction - effectively a reversal of its stimulatory QE program. That suggests that, even if this LIBOR spike dissipates soon, there remains a risk of further occurrences over the medium term.

How does this affect NZ markets?

Higher USD LIBOR-OIS spreads can cause higher NZ BB-OIS spreads via the sentiment channel - fear that whatever is causing the US moves could spread globally. As noted above, the contagion to NZ has been weak so far, possibly because the cause of the US moves remains unclear.

However, in a scenario where NZ BB-OIS spreads did follow suit, they should, in theory, be capped at around 50bp, since NZ banks can borrow from the RBNZ at OCR + 50bp as a last resort. That said, access to this facility is constrained by stigma, among other things, which means BB-OIS spreads could run higher than 50bp. During the GFC, 3mth BB-OIS peaked at 120bp.

Chart 5 - No impact on NZ mortgage rates yet 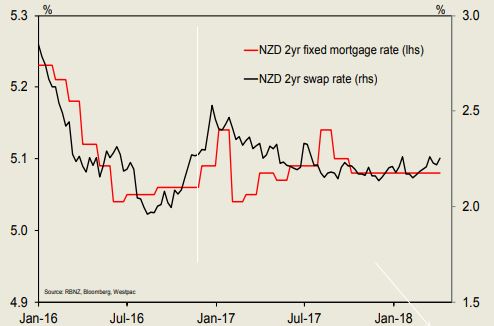 NZGB swap spreads also have a positive relationship with BB-OIS spreads, the former being the longer term expression of the latter. The relationship was close until 2012, but other factors such as yield direction have dominated since (Chart 6). Still, any large and persistent rise in BB-OIS, such as occurred during the GFC, should coincide with a rise in swap spreads. 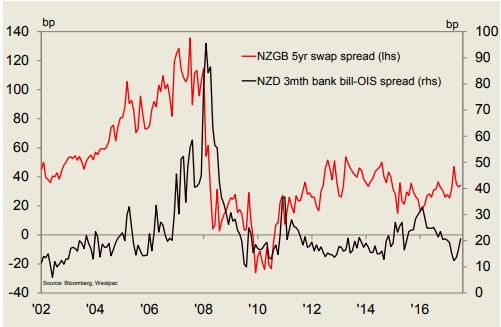 If rising BB-OIS spreads are interpreted as a reflection of potential funding stresses or a more risk averse environment, then it would be reasonable to expect term credit spreads for prime banks to rise in tandem. Chart 7 shows the recent rise in NZ BB-OIS has coincided with a fairly modest rise in Australian bank credit spreads so far. 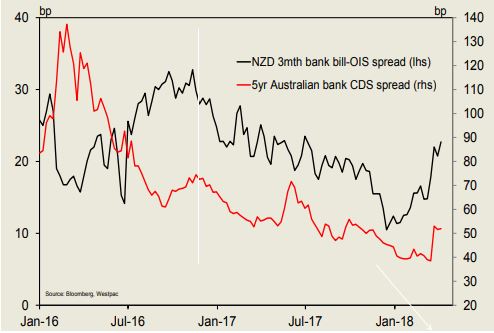 Regarding NZD/USD cross currency basis swaps (of which fx swaps are a special case), these have had a fickle relationship with BB-OIS. For much of the history, the relationship has been a negative one (i.e. BB-OIS rises and basis swap spreads fall). Notable exceptions tend to occur amid extreme cases, such as during the GFC. Interestingly, the recent rise in BB-OIS has seen a coincident positive rise in basis swap spreads (Chart 8). That has been most pronounced among shorter maturities, where the moves have seemed disproportionally high. 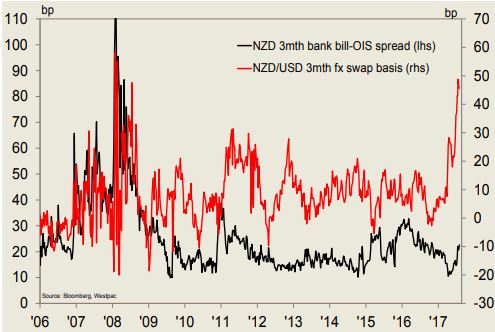 The basis swap spread implied by 3mth NZD/USD fx swaps prices has risen to 50bp - the highest since the GFC. We don’t have any strong evidence to explain the disproportionally large move, but can hypothesize that market concern about potential funding stresses in the US has spilled over to concern about the risk of such happening in the NZD market.

It’s also possible there has been a rise in activity by NZ borrowers, who use their short term USD programs and then convert the USD proceeds to NZD via fx swaps or basis swaps. However, if there was a rush to the US short-term funding markets by NZ borrowers, we’d expect to see some increase in term funding as well, and that hasn’t been the case. Indeed, activity from NZ companies borrowing in foreign currencies (mainly banks and large corporates), which typically pressures basis swap spreads upwards, has been muted lately.

If anything, the opposing force (non-resident entities, such as supranationals, issuing NZD bonds and converting the proceeds back into home currency) has been slightly larger than usual during the past few months (Chart 9). The rise in 5yr NZD/USD basis swap spreads since November, from 22bp to 35bp (highest since 2013) can’t easily be pinned on debt issuance related swap flow.

Chart 9 - Issuance activity has been moderate in 2018 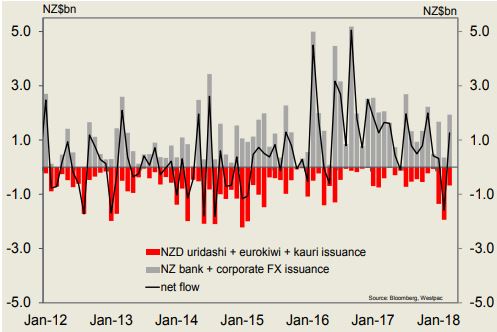 Whatever the cause, high fx swap basis may well persist because it cannot be easily arbitraged away. The large rise in fx basis relative to the rise in BB-OIS theoretically presents an arbitrage opportunity: NZ banks could borrow at the 3mth bank bill rate (close to flat) and lend the NZD via 3mth fx swaps at bank bill + 50bp currently. The main constraint on this occurring in practice is that the volume capacity of the NZ bank bill market is much smaller than that of the NZD/USD fx swap market. Similarly, NZ investors could theoretically buy short-dated foreign currency securities and asset-swap those into NZD for a large pickup over comparable quality NZD instruments. This would depress fx swap basis if done in large enough volume, but a constraint here could be investor mandate.

If fx swap basis does remain high, we would expect longer term cross currency basis swap spreads to be pressured higher too.

In concluding, we see the response in NZ BB-OIS to US developments so far as modest. That is appropriate given there are no fundamental stresses in the NZD funding markets. However the sentiment channel means that should US funding spreads rise further, there are significant risks for a range of NZD instruments.

Imre Speizer is the senior market strategist in the economics team at Westpac NZ. This article was originally published here, and is reposted with permission.